This is not so much a biography musical as a musical using all the hallmarks of a Ziegfeld revue - colourful costumes, beautiful girls, spectacular scenery and a melodious score from musical numbers by masters of the genre.

This extravaganza boasted 22 six-foot tail showgirls, a total cast of 60, costumes worth over £1 million and purported to tell the tale of legendary Broadway impresario, Florenz Ziegfeld. Sadly, Ziegfeld himself was a man forever surrounded by dozens of beautiful girls yet unable to build a coherent relationship with any one of them; he was surrounded by millions of his own box-office dollars yet unable to spend it on anything but outer surfaces. He had hit shows but few of the writers and choreographers would stay with him, since he was an impresario with no real idea of
anything beyond spectacle. Since the story of the man himself could not provide any “heart” or plot to the show, it came over as nothing more than a hugely over-the-top fashion parade from the museum of show business. Magnificent to look at - but nothing more.

Within a few weeks of the opening, following a critical mauling and backstage rows, both the director and the leading man left the show. Tommy Steele was called in to re-structure the show and until a new lead was signed up, Marc Urqhart, the understudy, took over the title role. After some re-writing the role of Ziegfeld was played by Topol, but not even he could save this glitteringly expensive musical. It closed on October 1st with losses estimated at some £3 million… 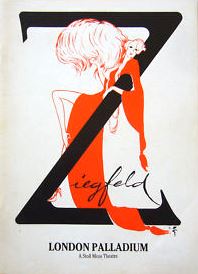 According to The Guinness Book Of Records, Ziegfeld’s losses of around £3 million are equal to those of King (a musical about Martin Luther King that ran for 6 weeks in London ending on 2 June 1990), and are the joint second greatest theatrical losses. First place for this record goes to Carrie produced in New York in May 1988, which lost around £4.2 million.