Wildcat "Wildy" Jackson arrives in 1912 in Centavo City with dreams of striking oil but with neither capital nor know-how to help her accomplish her goal. Joe Dynamite, the most successful crew foreman in the territory, finds her ruggedness appealing and agrees to work with her if she can prove ownership to her claimed land and hire a crew. She finds 10 acres (40,000 m2) owned by a hermit prospector, but Joe is certain the property is dry. Wildy attempts to lure him with her female charms, but when he still rejects her plans she has him falsely arrested, then released into her custody. A grateful Joe agrees to start work on the project but abandons it once he discovers it was Wildy who had him jailed. Left high and literally dry by her partner and crew, Wildy resorts to desperate measures to strike a Texas-sized gusher.

Nash had envisioned the main character of Wildy as a woman in her late twenties, and was forced to rewrite the role when Lucille Ball expressed interest not only in playing it but financing the project as well. Desilu, the company owned by her and soon-to-be ex-husband Desi Arnaz, ultimately invested $360,000 in the show in exchange for 36% of the net profits, the rights to the original cast recording (ultimately released by RCA Victor), and television rights for musical numbers to be included in a special entitled Lucy Goes to Broadway, a project that eventually was abandoned. Ball also was permitted to choose her leading man. Kirk Douglas's salary demands and heavy film schedule eliminated him from the running, and Gordon Macrae, Jock Mahoney, and Gene Barry were considered before she selected Keith Andes.

The Philadelphia tryout opened on October 29, 1960 to a glowing review from Variety, although local critics were less enthusiastic. The scheduled Broadway opening had to be postponed when trucks hauling the sets and costumes to New York City were stranded on the New Jersey Turnpike for several days by a major blizzard. After two previews, the show, directed and choreographed by Michael Kidd, opened on December 16 at the Alvin Theatre. The cast also included Paula Stewart and Swen Swenson, with Valerie Harper among the chorus members. Vivian Vance, Ball's costar from I Love Lucy, was in the opening night audience and was photographed giving the star a congratulatory hug backstage after the show. Hampered by lukewarm reviews and Ball's lingering illness, it ran for only 171 performances.

Ball quickly realized audiences had come expecting to see her Lucy Ricardo persona and began mugging and ad-libbing to bring her characterization closer to that of the zany housewife she had portrayed in I Love Lucy. It was clearly Ball who was drawing the crowds, and when she fell ill and demands for refunds ran high, the producers announced plans to close the show for a week in late March 1961 to allow her to recover her strength. The closure came sooner than planned when Ball, suffering from a virus and chronic fatigue, departed for Florida on February 8. She returned two weeks later, but on April 22 she collapsed on stage. It was decided the show would close for nine weeks at the end of May and reopen once its star had recovered fully,[4] but May 24 proved to be her final performance, as the musicians' union insisted on members of the orchestra being paid during the shutdowns. This ultimately made it financially infeasible for the production to remain active, forcing it to close permanently on June 3, 1961.

Wildcat was Ball's only appearance in a Broadway production. She had been previously cast in the Bartlett Cormack play Hey Diddle Diddle, a comedy that premiered in Princeton, New Jersey on January 21, 1937. Ball played the part of Julie Tucker, "one of three roommates coping with neurotic directors, confused executives, and grasping stars who interfere with the girls' ability to get ahead." The play received good reviews, but there were problems, chiefly with its star, Conway Tearle, who was in poor health. The play was scheduled to open on Broadway at the Vanderbilt Theatre, but closed after one week in Washington, D.C. when Tearle suddenly became gravely ill.

Act I
I Hear
Hey, Look Me Over
Wildcat
You've Come Home
That's What I Want for Janie
What Takes My Fancy
You're a Liar
One Day We Dance
Give a Little Whistle and I'll Be There
Tall Hope 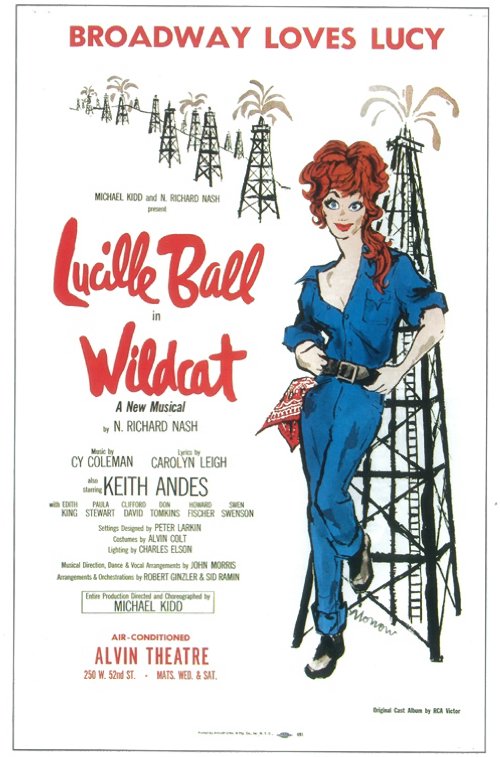