Based on the 2007 film of the same name, written by Adrienne Shelly, the musical tells the story of Jenna Hunterson, a waitress in an unhappy marriage to her husband Earl. When Jenna unexpectedly becomes pregnant she begins an affair with her gynecologist Dr. Jim Pomatter. Looking for ways out she sees a pie contest and its grand prize as her chance.

Jenna is a waitress and expert pie maker stuck in a small town and a loveless marriage. Faced with an unexpected pregnancy, Jenna fears she may have to abandon the dream of opening her own pie shop forever… until a baking contest in a nearby county and the town's handsome new doctor offer her a tempting recipe for happiness. Supported by her quirky crew of fellow waitresses and loyal customers, Jenna summons the secret ingredient she’s been missing all along – courage.

Background
The musical is based on the 2007 indie film Waitress. The film was produced on a budget of just $1.5 million, earning over $23 million in global box office receipts. The film starred Keri Russell, and was written and directed by Adrienne Shelly, who was murdered three months prior to the premiere of Waitress at the 2007 Sundance Film Festival. The film followed Jenna, a waitress and pie chef living in the American South, who unexpectedly becomes pregnant and feels trapped in an unhappy marriage. Looking for ways out she sees a pie contest and its grand prize as her chance.

Following the 2013 Tony Awards, producers Barry and Fran Weissler announced that a musical version of the film was in the works, with Paula Vogel writing the book, music and lyrics by Sara Bareilles and direction by Diane Paulus.[10] The Weisslers purchased the stage rights to the film shortly after its release in 2007. Paula Vogel withdrew from the project in January 2014. On December 11, 2014, the musical was officially confirmed, and it was announced that the show would receive its world premiere at the American Repertory Theater, Cambridge, Massachusetts, as part of their 2015-16 season, with Jessie Nelson now writing the book. A workshop was held the same month in New York City, with Jessie Mueller, Keala Settle, Christopher Fitzgerald, Bryce Pinkham and Andy Karl, among others, taking part. Nelson, with the best wishes of the late Adrienne Shelly's husband, used some of Shelly's unfinished scripts to help bring "her voice" to the project.

Productions
Waitress began previews on August 2, 2015, at the American Repertory Theater in Cambridge, Massachusetts, before the official opening on August 19, 2015, for a limited run to September 27, 2015. Tickets for the world premiere production sold out. The show has a book by Jessie Nelson, with direction by Diane Paulus, choreography by Chase Brock, set design by Scott Pask, costume design by Suttirat Anne Larlarb, lighting design by Kenneth Posner, musical direction by Nadia DiGiallonardo and sound by Jonathan Deans. Notable casting for the show included Jessie Mueller as Jenna, Drew Gehling as Jim, Joe Tippett as Earl, Jeanna de Waal as Dawn, Keala Settle as Becky, Dakin Matthews as Joe, Jeremy Morse as Ogie and Eric Anderson as Cal.

During previews at the American Repertory Theater, it was announced that the production would transfer to Broadway in March 2016. Previews began at the Brooks Atkinson Theatre, on March 25, 2016, with the official opening slated for April 24, just in time for the 2015-2016 Tony Award cut-off date of April 28. Tickets for the transfer went on sale on February 15. Changes to the creative team for the Broadway run, included Lorin Latarro replacing Chase Brock as choreographer and Christopher Akerlind replacing Kenneth Posner as lighting designer. For the Broadway production elements of the book were rewritten, new choreography developed and a new song written by Bareilles. Manhattan baker Stacy Donnelly, was hired to ensure the baking scenes were realistic. Donnelly taught the cast how to work and roll pie dough. The role of Jenna requires Mueller to crack eggs, sift flour and roll out dough on stage. To help immerse audiences real pies are warming as they enter the theatre, creating the aroma of a pie shop, with slices of pie also on sale. Cast changes included Nick Cordero taking over the role of Earl, Kimiko Glenn as Dawn and Christopher Fitzgerald who took part in the New York workshop as Ogie.
During previews the production set the record for a single performance at the Brooks Atkinson Theatre, taking $145,532. The production had required an initial investment of $12 million. During a technical halt at a preview performance composer and lyricist Sara Bareilles performed two songs, including a song previously cut from the production called “Down at the Diner.”

With music and lyrics by Sara Bareilles, book by Jessie Nelson, choreography by Lorin Latarro, and direction by Diane Paulus, Waitress made history on Broadway with the four top creative spots in a show being filled by women. In addition the creative posts of costume design and musical direction were held by women. Sara Bareilles said she was proud to be part of an all-female team: "It's really fun to be an example of the way it can look. We're a bunch of women who are deeply committed to finding a way to build a unified vision." The only other musical with a similar history was the 1978 Broadway musical Runaways, which had a book, music, lyrics, choreography and direction solely by one woman, Elizabeth Swados.
A US national tour is scheduled to begin at the Playhouse Square in Cleveland on October 17, 2017.

Acte II
"I Didn't Plan It" - Becky
"Bad Idea" (Reprise) - Company
"You Matter to Me" - Dr. Pomatter and Jenna
"I Love You Like a Table" - Ogie, Dawn, Company
"Take It From an Old Man" - Joe and Company
"She Used to Be Mine" - Jenna
"Everything Changes" - Jenna and Company
"Opening Up" (Finale) - Company 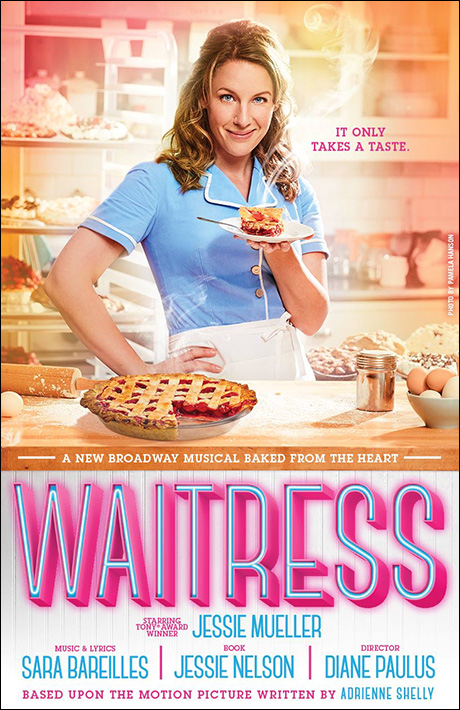 "In a rare case of an adaptation besting its source material, the new musical is an improvement on the 2007 movie it’s based on. From score to casting, book to staging, everything comes together with a deceiving ease." Elisabeth Vincentelli for New York Post

"Take terrific songs by Sara Bareilles, mix them to a story by Jessie Nelson that isn't too sugary, bake that with intimate, understated direction by Diane Paulus and top it off with a powerhouse performance by Jessie Mueller." Mark Kennedy for Associated Press

"A tasty slice of pie for those with a sweet tooth." David Rooney for Hollywood Reporter

"Sara Bareilles has written a charming score that suits the quirky material and Mueller’s dazzling voice and endearing personality." Marilyn Stasio for Variety 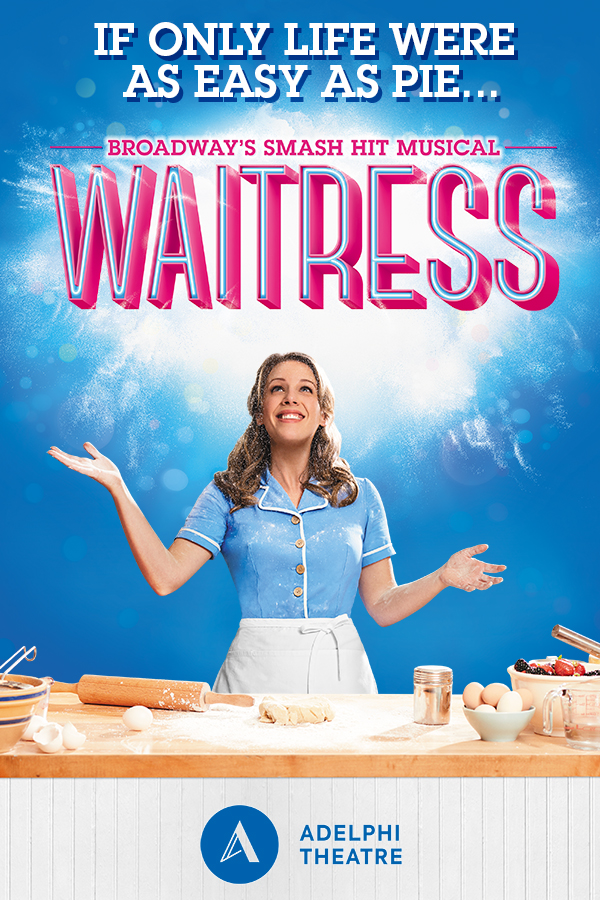