"Sally" opened at the New Amsterdam Theatre in New York City on December 21, 1920, and, by the time it closed in 1924, it had become the longest running Broadway musical up to that time. By the end of the decade, "Sally" would prove to be among the top five moneymakers of the 1920s. The show was designed as the musical comedy debut of the 22-year old "Ziegfeld Follies" headliner Marilyn Miller (pictured at far left with Leon Errol in the original production). A talented protege of Ziegfeld, Miss Miller's debut with the "Follies" took place two years before in 1918. Although her rise to leading lady status appears meteoric, Marilyn Miller had been a part of the Broadway theater scene since her arrival in New York City in 1914. Primarily a dancer, Marilyn was also a gifted singer and actress. She would continue to reign on Broadway until her untimely death in 1936. Her three film appearances (including a 1929 full Technicolor and sound version of "Sally") were far less successful.

The plot hinges on a mistaken-identity: Sally, a waif, is a dishwasher at the Alley Inn. She poses as a famous foreign ballerina and rises to fame (and finds love) through joining the Ziegfeld Follies. There is a rags to riches story, a ballet as a centrepiece, and a wedding as a finale.

Based on an unproduced musical The Little Thing by PG Wodehouse.

The story of the creation of "Sally" begins with the team of Jerome Kern, Guy Bolton, and P.G. Wodehouse, three collaborators whose early musical comedies at the Princess Theatre were intended to scale down the opulence of the age of operetta. Having been asked by Broadway's most extravagant producer, Florenz Ziegfeld, to write a show for his star Marilyn Miller, the three men concocted a story which combined the innocence of their earlier musicals with the lavishness of the "Follies" formula. Eventually, Wodehouse would bow out and Guy Bolton would become ultimately responsible for the libretto. For his part, Kern seemed uninterested in the prospect of a Ziegfeld-produced musical comedy. Much of his score recycles material from previous shows, including "Look for the Silver Lining" and "Whip-poor-will" (with lyrics by Buddy De Sylva, from the flop "Zip Goes a Million"); "The Lorelei" (lyrics by Anne Caldwell); and "You Can't Keep a Good Girl Down" and "The Church 'Round the Comer" (lyrics by P.G. Wodehouse). Clifford Grey supplied the lyrics for the few new songs in the score. At the request of Ziegfeld, who believed Kern to be an inexperienced symphonic composer, Victor Herbert was engaged to write the music to "The Butterfly Ballet" in Act Three. Herbert also conducted the ballet on opening night. 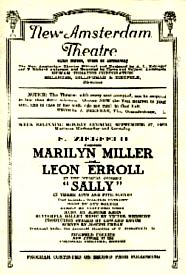