Set against the backdrop of the semi-fictional Headingley Cricket Club's matches, the comic and slightly melodramatic plot of Cricket has star player Donald torn between his team and his girlfriend Emma – as she decides to abandon watching cricket for what appears to be a far more exciting life at the race track with the caddish Vincent.

The leads in the cast are Donald, Emma, Emma's father, Vincent, and a West Indian fast-bowler from the opposing team named Winston B. Packer. The musical's chorus are the rest of the cricket players

After their collaboration on Evita in 1978, composer Andrew Lloyd Webber and lyricist Tim Rice took what was originally intended to be a temporary break from their illustrious theatrical partnership. They did not work together again until the request for this pièce d'occasion came up, and Cricket ended up being their final original musical.

Prince Edward, the Queen's youngest son, had joined Lloyd Webber's Really Useful Theatre Company as staff assistant in 1986. He commissioned a short musical from Lloyd Webber and Rice for his mother's 60th birthday celebration. The game of cricket was Tim Rice's favourite pastime – he had a cricket field on the grounds of his home and had his own cricket team – and Rice had a particular passion for this new comic musical about England's national sport. Rice used actual cricket-related names for his characters, boosting the light-hearted feeling of the piece. He and Lloyd Webber created a 25-minute tongue-in-cheek "musicalette" for the Queen.

Cricket is entirely sung-through, with no spoken dialogue.

The show debuted as planned on 18 June 1986 at Windsor Castle, directed by Trevor Nunn and starring Ian Charleson, Sarah Payne, and John Savident. The musicians were members of Colosseum II and others – the ensemble that had first performed Lloyd Webber's Variations. The men's vocal group Cantabile played the cricketers' chorus.

The Windsor Castle performance was quite spirited and amusing, and was very well received. Two more performances followed. One was at Lloyd Webber's Sydmonton Festival on 15 July 1986. Another performance followed in November 1986 at Tim Rice's favourite charity, the Lord's Taverners Ball, where Rice played the cricketer Wittering, dressed in his own Heartaches Cricket Club uniform.

A segment of the original rehearsals of Cricket was televised on the Andrew Lloyd Webber installment of The South Bank Show, which aired on 15 November 1986. The segment featured Sarah Payne and Alvin Stardust rehearsing "As the Seasons Slip Fruitlessly By" and "The Sport of Kings".

There have been no further performances of the musical.

Lloyd Webber used at least five of the tunes from Cricket in his musical Aspects of Love (1989). This meant that Cricket, which had been extremely well received, was a dead item, a fact that greatly distressed Tim Rice. The piece could thus never be expanded into a full theatrical musical. Lloyd Webber used other tunes from Cricket in Sunset Boulevard.

The Cricket libretto was published in 'A Breathless Hush ...': The MCC Anthology of Cricket Verse (2004). Cricket has not been recorded for commercial release, although a non-commercial instrumental demo studio album was recorded on solo piano in 1986. The performance rights for the piece have not yet been made available.

The men's vocal group Cantabile recorded "The Summer Game", featuring Tim Rice singing as the Earl, on their 2011 CD Songs of Cricket.

The Summer Game – The Earl, cricketers chorus
As the Seasons Slip Fruitlessly By – Emma
The Sport of Kings – Vincent, Emma
The Art of Bowling – Winston B. Packer
All I Ask of Life – Donald
Fools Like Me – Emma and cricketers
A Ban for Life – the Earl and Vincent; Emma
Wittering's Final Innings – Cricketers, the Earl, Wittering
The Making of St. Leger – Vincent; All
The Final Stand – the Earl and cricketers; All
One Hot Afternoon – Donald and Emma; All 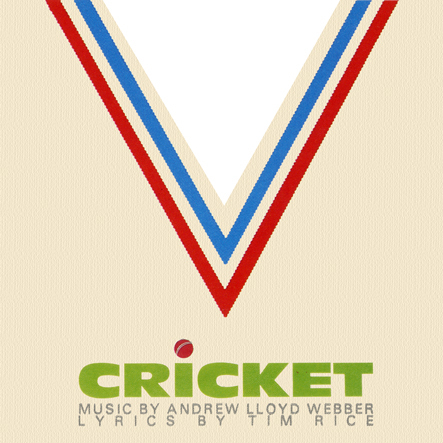