A backstage musical comedy murder mystery set in a Boston theatre in the 1950s. The leading lady has been murdered during the curtain call and homicide detective (and musical theatre afficianado) Frank Cioffi is called in to investigate. Bodies begin to pile up as the cast shrinks and everyone is a suspect.

Curtains is a musical with a book by Rupert Holmes, lyrics by Fred Ebb, and music by John Kander, with additional lyrics by Kander and Holmes.

Based on the original book and concept by Peter Stone, the musical is a send-up of backstage murder mystery plots, set in 1959 Boston, Massachusetts and follows the fallout when the supremely untalented star of Robbin' Hood of the Old West is murdered during her opening night curtain call. It is up to a police detective who moonlights as a musical theater fan to save the show, solve the case, and maybe even find love before the show reopens, without getting killed himself.

Stone died in April 2003, leaving the book unfinished, and Holmes was hired to rewrite it. Ebb also died before the musical was completed. Curtains had its world premiere on July 25, 2006 at the Ahmanson Theatre in Los Angeles. Local reviews were mixed but not discouraging, and the producers decided to transfer the show to Broadway with minor alterations.

The musical received mixed reviews on Broadway, with Ben Brantley writing in The New York Times :"David Hyde Pierce…steps into full-fledged Broadway stardom with his performance here…Perhaps this switching of creative horses accounts for the enervation that seems to underlie the lavish expenditure of energy by a top-of-the line cast that includes Debra Monk, Karen Ziemba and Jason Danieley. Brightly packaged, with Kiss Me, Kate-style sets by Anna Louizos and costumes to match by the industrious William Ivey Long, Curtains lies on the stage like a promisingly gaudy string of firecrackers, waiting in vain for that vital, necessary spark to set it off."

Clive Barnes wrote in the New York Post: "Part of the trouble was director Scott Ellis' failure to italicize sufficiently the inside comedy, but there probably wasn't much he could do. The choreography by Rob Ashford was unnoticeable, the scenery by Anna Louizos uninterestingly ugly, while William Ivey Long unwisely saved his best and funniest costumes for the curtain calls. Through all this farrago, Hyde Pierce moved (or, in that curtain call, "rode") with unshatterable aplomb - taking the basically comic concept of a tough plainclothes detective as a musical comedy queen, and running with it just as far, and even a bit beyond, as the material could take it.

LIEUTENANT FRANK CIOFFI (40s): Local Boston detective who is also a musical theatre aficionado. Aside from being exceptionally good at his job, he has also aspired to be a musical theatre performer his entire life. He falls in love with Niki.
NIKI HARRIS (20s-early 30s) Pretty, naïve ingénue. Niki is a chorus girl/understudy in the chorus of the show-within-the-show during its Boston tryout. She aspires to make it as a performer on Broadway. She meets and falls in love with Dt. Frank Cioffi who is investigating a murder at the theatre.
GEORGIA HENDRICKS (30s) Female half of our songwriting team. Ends up taking on the leading lady role.
CARMEN BERNSTEIN (45-65) Brassy Broadway producer.
AARON FOX (40s) The composer of the show-within-the-show. His songwriting partner, Georgia, is also his wife from whom he's separated. He's a sexy, charming ladies man.
SIDNEY BERNSTEIN (Late 50s-Mid 60s): The producer of an out of town flop. Sidney is tough and self-serving.
CHRISTOPHER BELLING (40-60) English director. Very camp. Very funny.
BAMBI BERNÉT (Early 20s-early 30s) Performer in the chorus and daughter of Carmen, the lead producer. Hungry to work her way up to leading performer many think she was only hired because of her mother.
DARYL GRADY (30s): A Theatre critic for the local Boston newspaper, he enjoys using the power he has to make or break shows during their out of town tryouts.
JOHNNY HARMON (40s-50s) The Stage Manager of the show-within-the-show. Johnny is is gruff but lovable. He keeps the company in line and on their toes throughout the rehearsal process.
OSCAR SHAPIRO (45-65): The general manager. An agreeable if slightly gruff man. He is always looking for any angle to find money.
BOBBY PEPPER (20s to early 30s) The choreographer and lead dancer.
JESSICA CRENSHAW (30s-40s) Fading Hollywood star. A diva, who has no right to be one, she is a terrible singer and actress who stars in the show within a show and gets murdered on its opening night. 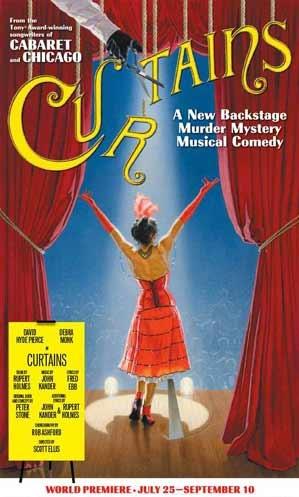 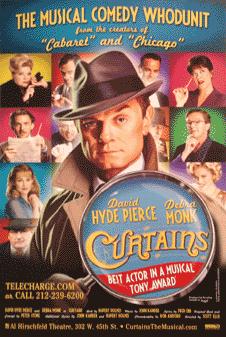 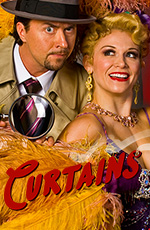 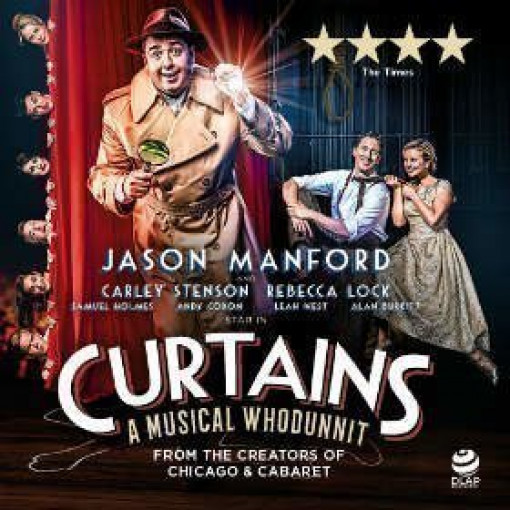