«Lend Me a Tenor» 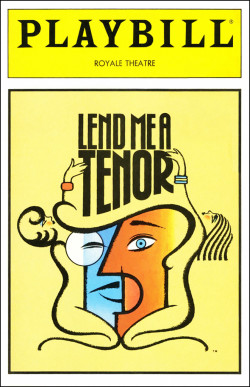 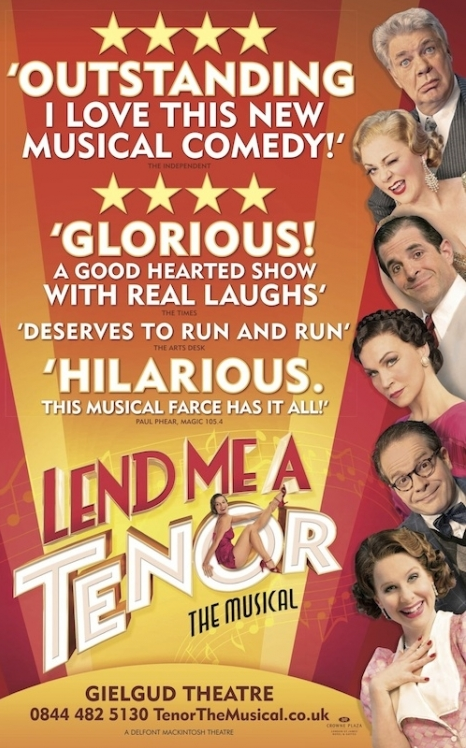 Type de série: Original London
Théâtre: Gielgud Theatre (Londres - Angleterre)
Durée : 1 mois 3 semaines Nombre : Première Preview : jeudi 02 juin 2011Première : mercredi 15 juin 2011Dernière : samedi 06 août 2011Mise en scène : Ian Talbot • Chorégraphie : Randy Skinner • Producteur : Avec : Matthew Kelly (Henry Saunders), Joanna Riding (Maria Marelli), Damian Humbley (Max), Michael Matus (Tito Merelli), Sophie-Louise Dann (Diana Divane), Cassidy Janson (Maggie Saunders), Gay Soper, Jane Quinn , Michelle Bishop will star as the 'Ladies of the Opera Guild', Jemma Alexander, Karen Aspinall, Natasha J. Barnes, Nick Butcher, Kelly Chinery, Sharon Eckman, Daniel Farrow, Andrew Keelan, Kara Lane, Connor McAllister, Haydn Oakley, Stephen Oliver-Webb, Ryan Pidgen, Jeremy Secomb, Emma Sewell, John Stacey, Robert Traynor, Michelle White.Commentaires : The show originally had a try-out at the Theatre Royal Plymouth on September 24th 2010, and was re-worked for a West End production, previewing from June 2nd. It received very mixed notices (though the producers claimed they were “mostly wonderful”) with several critics pointing out that a musical farce is hard to achieve: farce requires break-neck action, while the songs and dances tend to slow things down. For some, the songs were too bland, and Ken Ludwig’s original hugely successful play had gained nothing by being turned into a musical. For others, it was a good-hearted show that had the audiences roaring with laughter.
However, business dropped, and although bookings were being taken until November 19th, the producers decided to cut their losses and close the production on August 6th.Presse : "It’s all passably entertaining – if you’re prepared to accept this light-hearted and sometimes laboured mix of high art, high jinks and hokum for the fluff and nonsense it is. The songs – with flip, throwaway lines – are barely memorable, the dance sequences fine but infrequent and emotions are brought to the boil with all the sophistication of four-minute pasta."
Dominic Cavendish for The Daily Telegraph

"It gets by on period charm and one dazzling knockout number."
Michael Billington for The Guardian

"Polished but instantly forgettable musical...It skips along breezily without a single memorable tune or unforced rhyme."
Nick Curtis for The Evening Standard