«Women on the Verge of a Nervous Breakdown»

Both touching and hilarious, it's a story about women and the men who pursue them...finding them, losing them, needing them, and rejecting them. At the center is Pepa whose friends and lovers are blazing a trail through 1980s Madrid. And why do they all keep showing up at her high-rise apartment? Is it her gazpacho? Along with Pepa, there's her missing (possibly philandering) lover, Ivan; his ex-wife of questionable sanity, Lucia; Pepa's friend, Candela, and her terrorist boyfriend; a power-suited lawyer plus a taxi driver who dispenses tissues, mints and advice in equal proportion. Mayhem and comic madness abound, balanced by the empathy and heart.

Based on the 1988 film by Pedro Almodóvar

In October 2009, a workshop reading for the Lincoln Center Theater production of the musical was held, featuring Salma Hayek, Jessica Biel, Matthew Morrison and Paulo Szot. Patti LuPone, Tom Hewitt, and Sherie Rene Scott were in workshop readings of the musical in March 2010, with direction by Bartlett Sher.

Women on the Verge opened on Broadway at the Belasco Theatre on November 4, 2010, with previews starting October 8. The musical starred Sherie Rene Scott, Patti LuPone, Brian Stokes Mitchell, and Laura Benanti, with direction by Bartlett Sher. Justin Guarini, the runner up from the first season of American Idol, made his Broadway debut as Carlos. The production was a limited engagement that was scheduled to end on January 23, 2011, but due to low grosses and ticket sales, closed early on January 2, 2011. At the time of closing, the show had played 30 previews and 69 regular performances.

A West End production, also directed by Bartlett Sher and starring Tamsin Greig, Jérôme Pradon, Haydn Gwynne, Anna Skellern, and Willemijn Verkaik is scheduled to open at the Playhouse Theatre in January 2015 for a 20 week run. 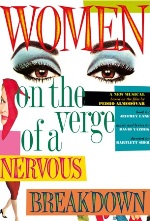 Type de série: Original
Théâtre: Belasco Theatre (Broadway - Etats-Unis)
Durée : 1 mois 4 semaines Nombre : 30 previews - 69 représentationsPremière Preview : vendredi 08 octobre 2010Première : jeudi 04 novembre 2010Dernière : dimanche 02 janvier 2011Mise en scène : Bartlett Sher • Chorégraphie : Christopher Gattelli • Producteur : Commentaires longs: Delayed previews twice in order to allow the creative team and cast to work on the complex cinematic transitions between scenes.
Limited engagement. The limited run was to have ended on 1/23/2011 but closed early.
During previews: "My Crazy Heart" opened the show and was performed by the Women. / Where "My Crazy Heart" is now, there was a reprise. / "Madrid" opened the second Act. / "Shoes From Heaven" was the original finale.Presse : NEW YORK TIMES REVIEW: "They’re giving out the wrong drug at the Belasco Theater, where “Women on the Verge of a Nervous Breakdown” opened on Thursday night. As in the 1988 Pedro Almodóvar movie that inspired this star-jammed musical, Valium is consumed in large quantities by many characters. That is so pharmaceutically irresponsible. What this production needs — immediately and intravenously — is Ritalin. " 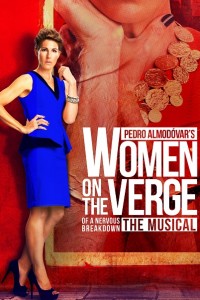