«Witches of Eastwick (The)»

The show is set in the tiny New England community of Eastwick, where three modern-day witches, to brighten up their lives, innocently plot and conjure over a heady brew of weak Martinis and peanut butter brownies. With the arrival of 'Darryl Van Horne', in whom their fantasies are made fresh, he makes them have so much fun that they are really flying! And then all hell breaks loose. Quite literally. 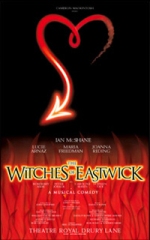 EDWARD SECKERSON for THE INDEPENDENT, says "The enjoyment factor is high, the production values sky-high." He goes on to say it is a "likeable and beautifully mounted show".

MATT WOLF for REUTERS/VARIETY, also generally liked the show, saying, "As long as its leading ladies join forces vocally, not to mention aerially, the show flies.. As it happens, that's often enough to keep director Eric Schaeffer's production mostly airborne, despite some dead patches in the second act and a game if underpowered leading man..... When he's not attempting to sing or dance, McShane cuts an attractive roue who matches up perfectly to the ``bearish, dark man'' described in Updike's novel."

BENEDICT NIGHTINGALE for THE TIMES, says, "Dana P. Rowe's music remains refreshingly tuneful, whether it opts for the energetic and brash or for the soft and slightly soppy. John Dempsey's rhymes are never feeble or silly, though seldom very clever. But I caught myself wishing for a dash of Sondheim or Weill, a pinch more toughness and acerbity, along with the fingernails and frogs in the witches' brew."

NICHOLAS DE JONGH for THE EVENING STANDARD gave the show a mixed review saying, "Of the 20 songs, some inspiring frenetic choreography by Bob Avian and Stephen Mear, just one, the witty Dirty Laundry, boasts the impact of a hit. And Maria Friedman also plays powerful, poignant vocal gymnastics in Words, Words Words. But though Rowe's score achieves snatches of symphonic excitement and drama, this is a musical where the scenes between songs and music provide most of the fun and amusement."

ROBERT HEWISON for THE SUNDAY TIMES says,"There are many things to be enjoyed in The Witches of Eastwick."

MICHAEL BILLINGTON for THE GUARDIAN says, "Devil of a good sex fantasy set to music." He goes on to say "Ian McShane as the devil may not have all the best tunes but, after a long absence from the stage, he overflows with energy and a leering, saloon bar smuttiness." Billington goes on to say that "Maria Friedman is outstanding...Joanna Riding is also sharply funny."

SUSANNAH CLAPP for the OBSERVER says, "It's a bubbling cauldron, but it's not spellbinding. The Witches of Eastwick, the catchy and colourful new musical production from Sir Cameron Mackintosh, has lots to recommend it. What it lacks is an original pulse, and a dynamic leading man."

CHARLES SPENCER for THE DAILY TELEGRAPH says, "WHAT a relief. After a string of duds this year, the West End finally has a new musical worth making a song and dance about."

CHARLES SPENCER for THE DAILY TELEGRAPH says, “Now it has transferred to the smaller Prince of Wales, McShane has been replaced by the great Clarke Peters, and The Witches of Eastwick looks like a brimmingly confident smash hit.” THE DAILY MAIL says, “Did I enjoy it more this time round? Well, yes, actually. Not a lot, but a bit. “

THE EVENING STANDARD says, "This comic operetta has been given a shot in the erogenous zones through its casting of Clarke Peters as the devilish seducer....Eric Schaeffer’s production bustles with ardent singing, dancing brio and broad humour."

SHERIDAN MORLEY for TELETEXT says, "It still looks, a year on, like work in progress and that is what gives it such fascination: in here somewhere are about five quite different musicals."

ROBERT HEWISON for THE SUNDAY TIMES says, "Josefina Gabrielle, Joanna Riding and Rebecca Thornhill are warm and sexy." He goes on to say, Clarke Peters is "entertaining", but "what had been a musical comedy has become a comedy musical".

RHODA KOENIG for THE INDEPENDENT was not too impressed saying, “After his promising entrance, Peters turns out to be about as sexy and subversive as Burt Reynolds trying to embarrass a female guest on a chat show.”

Witches of Eastwick (The) (2002-08-Princess Theatre-Melbourne)

Witches of Eastwick (The) (2007-06-Signature Theatre-Arlington)

Type de série: Revival
Théâtre: Signature Theatre (Arlington - Etats-Unis) Durée : 1 mois 1 semaine Nombre : Première Preview : mardi 05 juin 2007Première : mardi 05 juin 2007Dernière : dimanche 15 juillet 2007Mise en scène : Eric Schaeffer • Chorégraphie : Bob Avian • Stephen Mear • Producteur : Commentaires longs: The authors made numerous changes to the show. Numbers were abbreviated (Eastwick Knows), cut (I Love A Little Town) and added (Your Wildest Dreams). Scenes and songs were re-arranged, and the production received positive notices.Presse : The Washington Post reviewer wrote that "The musical adaptation has way more kick than the wispy 1987 film…. It's on the technical level that [Eric Schaeffer]'s production still has kinks to work out, for until the actresses are airborne… the mechanics look and feel clunky." BroadwayWorld.com stated that "director Eric Schaeffer certainly pulls The Witches of Eastwick all together… does it ever succeed." CultureVulture.net commented that the show is "full of body-shaking thunder, raunchy behavior, and surprises. Gut reaction based on the performance seen June 17 says this show will make it to Broadway and be reasonably successful there." Talkin' Broadway wrote that the "Broadway actors… give memorable and funny performances in the four lead roles…. Choreographer Karma Camp gets a chance to show off in this production."