«On with the Dance»

The 22 scenes were filled with a large cast and chorus that took 27 hours to get through the dress-rehearsal in Manchester! Noel says of the revue," ...was lavish to a degree and very good in spots." "Those three days in Manchester were on the whole unpleasant although fraught with incident. In the first place I discovered that my name was not on the bills at all. The show was labelled 'Charles Cochran's Revue,' which, considering that I had done three-quarters of the score, all the lyrics, all of the book and directed all the dialogue, scenes, and several of the numbers, seemed to be a slight overstatement. i went roaring back from the theatre to the Midland Hotel and attacked Cockie in his bathroom. i am not at all sure I did not deprive him of his towel while I shrieked at him over the noise of the water gurgling down the plug-hole. I will say however that he retained his dignity magnificantly, far more so than I, and in due course calmed me down and gave me some sherry. It is odd that in all of the years I have since worked with Cockie, that show was the only one over which we have ever quarrelled. i think the psychological explanation mnust be that then, in those early days of our association, we had neither of us estimated accurately enough our respective egos. And a couple of tougher ones it would be difficult to find."

Coward wrote his songs while he was acting in his first stage hit, The Vortex. 1925 was a busy year for Coward, in which he produced three other plays in London: Hay Fever, Fallen Angels and Easy Virtue.

The show opened at the Palace Theatre, Manchester, England, on 17 March 1925 and transferred to the London Pavilion, where it ran for 229 performances. It is best remembered for Alice Delysia's singing "Poor Little Rich Girl". Cochran wanted to cut the piece and had to be dissuaded by Coward. As well as Delysia, the cast included Hermione Baddeley, Ernest Thesiger, Nigel Bruce and Douglas Byng. On opening night, Coward was not yet the famous name he would be by the end of the year: The Manchester Guardian review mentioned him only once, and The Times review did not mention him at all.

Aucun dossier informatif complémentaire concernant On with the Dance 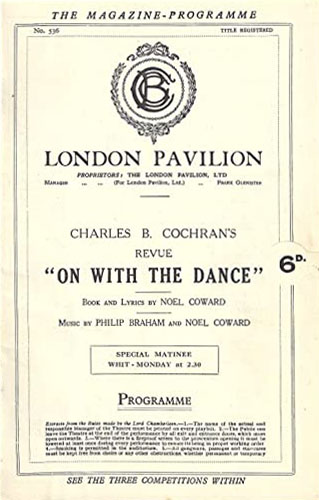 The reviewer in The Sunday Times was not impressed, calling it "a curious mixture of perfect beauty and perfect drivel," with "not a good tune in the whole piece"

Whereas The Times critic responded more positively, noting that "as a whole, with the dancing always preponderating, the revue [was] excellent."

The Era's reviewer wrote on May 9, 1925, "The most comical thing in the revue is the Vicarage Garden Party on the lines of a musical comedy, with Miss Hermione Baddeley giving a clever and cruel burlesque of Nellie, the heroine, and Mr. Ernest Thesiger and Mr. Douglas Byng, as two clergymen, singing the funniest number of the evening."

The Morning Post (1 May 1925) says: "Mr Charles Cochran's new revue is at once the most decadent and most brilliant thing he has ever done. the whole thing is more than modern, bizarre, grotesque, fantastic, unnatrual. the speed of the change from scene to scene, of the performance of each number, is feverish, burlesquing the speed of opur overheated life. At times the players seem mad, intoxicated with the desire to force their bodies to do something faster, faster."

"As befits Mr. Coward's genius, many of the incidents are as nature seen through a glass crookedly, and when we see some normal little typical revue duet-dance face to face, it seems positively dull - an effort to restore the company to a state of mental balance. Those arid, futile people that Mr. Coeward puts into his plays dash about the stage, worked into afrenzy by the syncopated music."

"M. Massine, who produced the two amazing ballets, 'The Rake', suggested by engravings of Hogarth, and 'Crescendo', an attempt to 'shatter' the gentle tranquility of Les Sylphides by the insistent clamour of modernity - both left one gasping - danced briliantly. His resource is magnificent, his multiplicity of movement astonishing, his accuracy marvellous. But all of course, bizarre, preposterous, in so much that the beautiful stately 'Hungarian Wedding' with which the revue ended almost perished because the contrast was too great. The number at the end of the first part, 'Couldn't We Keep on Dancing?' should be taken as the finale."