The city of Metropolis - around the year 2000. The workers operate vast machines below the city and power the privileged lives of the upper class on the surface of the city. Workers are forbidden to read and to learn. They never see daylight.

The city was built by John Freeman, who now runs it like a despot. His son, Steven, lives the privileged life of the sons of the upper class playing games and taking his pleasures in the Eternal Gardens, ignorant of the dark secrets below the city.

Soon, he discovers a young woman from the lower depths of the city. Maria escapes briefly from "down below" in an effort to educate the children of the workers how the rich enjoy themselves. In pursuit of this vision, Steven ends up at one of the machines. Shocked by seeing how the workers suffer for no meaningful purpose, he trades places with worker 11811 (George). A group of discontented workers poised for revolution attend inspirational homilies given by Maria in the catacombs.

Meanwhile, the inventor, Warner, has developed a human-like female machine - 'Futura'. John Freeman wants to use the machine to deceive his son Steven and the workers as an attempt to break down the burgeoning resistance. Freeman wants the machine to take the form of Maria and to use it to discredit and destroy her.

Metropolis is a musical based on the 1927 silent movie of the same name that was staged at the Piccadilly Theatre in London in 1989. The music was written by Joe Brooks, the lyrics by Dusty Hughes. The show was directed by Jerome Savary. The cast included Judy Kuhn, Brian Blessed, Graham Bickley, Jonathan Adams, Paul Keown and Stifyn Parri.

After that time Joe Brooks worked with American Randy Bowser at editing the already finished musical. By 2002 they had created a more complete libretto to the show, and it was first produced at the Pentacle Theater in Salem, Oregon.

Main changes between the silent film and the musical are name changes for many of the characters (Joh Fredersen = John Freeman, Freder Fredersen = Steven, Rotwang = Warner, Hel = Helen), slightly different religious themes, a completely different ending, and a larger focus on the children. 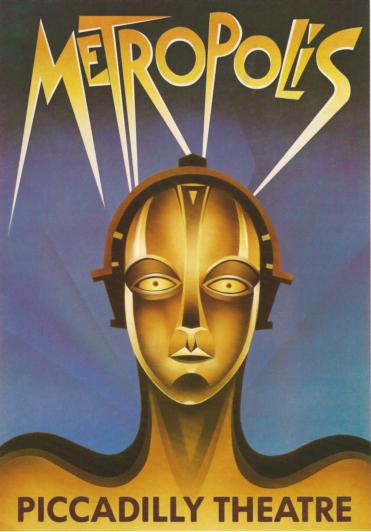