While it's true that most musicals take a long time to get to Broadway, GRAND HOTEL's journey was particularly long--almost 30 years!
Menschen im Hotel marked the beginning of the career of popular Austrian novelist Vicki Baum in 1929. She dramatized the novel for the Berlin stage later in the same year. The play became a hit, and its English-language adaptation enjoyed success in New York in the early 1930s and was made in to the blockbuster 1932 Academy Award-winning film, Grand Hotel, starring John Barrymore, Greta Garbo and Joan Crawford.
At the Grand
Davis, Wright, and Forrest first adapted Baum's story in 1958 under the title At the Grand, changing the setting from 1928 Berlin to contemporary Rome and transforming the ballerina into an opera singer closely resembling Maria Callas to accommodate Joan Diener, who was scheduled to star under the direction of her husband Albert Marre. All of them had collaborated on the earlier musical Kismet and anticipated another success, but Davis' book strayed too far from the story familiar to fans of the film. When Paul Muni agreed to portray Kringelein, the role was changed and expanded, with the character becoming a lowly hotel employee whose stay in a hotel suite is kept secret from the management. Flaemmchen became a dancing soubrette, Preysing and his dramatic story line were eliminated completely, and two deported American gangsters were added for comic relief.
At the Grand opened to mixed reviews and good business in Los Angeles and San Francisco, but when an unhappy Muni refused to extend his preliminary contract and left the production, producer Edwin Lester decided to cancel the Broadway opening scheduled for September 25, 1958, and everyone moved on to other projects.
Grand Hotel
Three decades later, Davis, Wright, and Forrest decided to dust off their original material and give the show another try. This time it was placed in the hands of director/choreographer Tommy Tune, who envisioned it as a two-hour, non-stop production comprising dialogue scenes, musical numbers, and dance routines overlapping and at times competing with each other, thereby capturing the mood of a bustling hotel where something is happening at all times. Seven songs from At the Grand were incorporated into what was now called Grand Hotel, although two were dropped during the Boston tryout.
The creative team proved to be too attached to the original material and resisted every change that Tune proposed. "Bluntly stated, the show didn’t work. With the exception of the choreography and the physical trappings, the show was deadly," Tune recalled in his memoir Footnotes. Frustrated, he finally fired Wright and Forrest and brought in Maury Yeston in 1989, with whom he had worked in Nine, to compose six new songs and revise others (including rewriting over half the lyrics in the show). He also hired Peter Stone to doctor Davis' book, although Stone refused official credit for his work. Tune later commented, "I hate it when it gets ugly on a show. It always does though, and you've gotta be hearty to survive. If it's not the writers, then it's the producers or the cast. There is always turmoil, but if you're lucky some good can come of it all. I have always tried to be kind to everyone, but please don’t mistake my kindness for weakness."

Broadway and subsequent productions
After thirty-one previews, Grand Hotel opened on November 12, 1989 at the Martin Beck Theatre, and later transferred to the George Gershwin to complete its total run of 1,017 performances. The show is played without an intermission. The original cast included Liliane Montevecchi as Elizaveta Grushinskaya, Michael Jeter as Otto Kringelein (garnering much praise and several awards), David Carroll as the Baron, Timothy Jerome as Preysing, John Wylie as Otternschlag, Bob Stillman as Erik, and Jane Krakowski as Flaemmchen. Replacements later in the run included Cyd Charisse (in her Broadway debut at age 70) and Zina Bethune as Elizaveta, Austin Pendleton and Chip Zien as Otto, and John Schneider, Rex Smith, and Brent Barrett as the Baron. The production captured 12 Tony nominations, winning five awards, including best direction and choreography for Tommy Tune.
The release of the much in-demand original cast recording was delayed nearly two years due to legal disputes with Wright and Forrest. By the time the situation was resolved, Carroll was seriously ill with AIDS, and died from a pulmonary embolism while in the bathroom of the recording studio early in the session. Brent Barrett, who had appeared as the Baron both on Broadway and in the national tour, sang the role for the cast album released by RCA Victor. As an homage to Carroll the cast album features a bonus track of his performance during a 1991 cabaret fundraiser for Equity Fights AIDS, singing the Baron's major song, "Love Can't Happen".
The first West End production opened on July 6, 1992 at the Dominion Theatre, where it ran for slightly less than four months. In 2004, Mary Elizabeth Mastrantonio starred as Elizaveta in a small-scale production directed by Michael Grandage at the Donmar Warehouse. 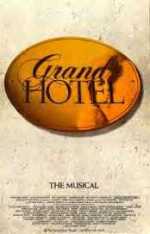 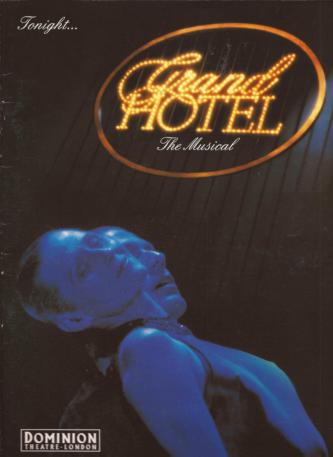 Type de série: Revival
Théâtre: Donmar Warehouse (Londres - Angleterre) Durée : 2 mois 2 semaines Nombre : Première Preview : vendredi 19 novembre 2004Première : lundi 29 novembre 2004Dernière : samedi 12 février 2005Mise en scène : Michael Grandage • Chorégraphie : Producteur : Avec : Mary-Elizabeth Mastrantonio (Elizaveta Grushinskaya) - Helen Baker (Flaemmchen) - Julian Ovenden (Baron Felix von Gaigern) - Daniel Evans (Otto Kringelein) - Gillian Bevan (Raffaella) - Martyn Ellis (Herman Preysing) - Gary Raymond (Colonel-Doctor) - Sara Annis - Hattie Bayton - David Birrell - John Conroy - Elizabeth Cooper-Gee - Paul Hazel - David Lukas - Graham Macduff - Joseph Noble - Sevan StephanCommentaires : Michael Grandage’s scaled-down production in the Donmar was much better received than the original short-run, lavish Dominion Theatre production twelve years earlier - though the book itself was still considered to be a handicap. This time there was much praise for the intimacy of the performances and the emotional appeal of the score.Presse : NICHOLAS DE JONGH for THE EVENING STANDARD says, "Well-sung production...how utterly entranced and moved I was....worth a four-star rating"
PAUL TAYLOR for THE INDEPENDENT says, "Michael Grandage's splendid studio-sized version at the Donmar Warehouse hits you with a thrilling, complicitous immediacy."
CHARLES SPENCER for THE DAILY TELEGRAPH says, "It's a stylish and enjoyable production, but... Grandage can't quite disguise the fact that Grand Hotel is often second-rate."
MICHAEL BILLINGTON for THE GUARDIAN says, "It isn't a classic Berlin musical. But it manages to suggest that a hotel offers a microcosm of human experience; and, when the cast lines up against the back wall economically to evoke a disgruntled shareholders' meeting or a depleted ballet-audience, you know you are in the hands of a master director."
BENEDICT NIGHTINGALE for THE TIMES says, "If you ignore many of the lyrics — “here’s the place where the great ones walk, here’s the place where the smart ones talk” — you should enjoy tunes that have a Weimar lilt in keeping both with the period, which is 1928.....But there’s still too much dud dialogue and, if you’ll permit the paradox, too much overblown banality."
ALSTAIR MACAULAY for THE FINANCIAL TIMES says, "A much-needed reminder that a musical can be musically thrilling - and can count as true music drama, too. This new production at the Donmar Warehouse also leaves an intensely stylish visual impression."
LISA MARTLAND for THE STAGE says, "Intimate as the Donmar.....drawing the audience in so close that it is almost impossible not to experience the guests’ feelings of passion, hope and despair."