"Girl Crazy" was written during the Depression, partly in an attempt to lighten the spirits of its audiences. Although the plot is frothy, the musical score is exquisite and features such enduring and beloved standards as "Embraceable You" and "I've Got Rhythm."

According to his father, Danny Churchill Jr. too focused on girls and parties. Thus, Danny’s father ships him off to a mostly male town in Arizona with the goal of getting Danny’s attention focused on more serious matters. However, soon after arriving, Danny falls in love with the local postmistress, Molly Gray. He wins Molly’s affections – but can he beat off a New York rival?

The musical opened at the Alvin Theatre on October 14, 1930 and closed on June 6, 1931 after 272 performances. It was directed by Alexander Leftwich, with choreography by George Hale and sets by Donald Oenslager. This musical made a star of Ginger Rogers, who, with Allen Kearns, sang "Could You Use Me?" and "Embraceable You" and, with Willie Howard, "But Not for Me". Ethel Merman, in her Broadway debut sang "I Got Rhythm", "Sam and Delilah", and "Boy! What Love Has Done To Me!" and "became an overnight sensation...that launched her fifty year career." Also of note is the opening night pit orchestra, which was composed of many well-known jazz musicians, including Benny Goodman, Gene Krupa, Glenn Miller and Jimmy Dorsey.

"The score was one of the Gershwins' best" according to theatre writer Ken Bloom.

In 1992 it was produced with a new title as the stage musical Crazy for You. The show was heavily revised, with a completely new plot, and songs from other Gershwin shows added.

Acte I
Bidin' My Time
The Lonesome Cowboy
Could You Use Me
Bronco Busters
Barbary Coast
Embraceable You
Goldfarb, That's I'm!
Embraceable You (Reprise)
Sam and Delilah
I Got Rhythm

Acte II
Land of the Gay Caballero
But Not For Me
Treat Me Rough
Boy! What Love Has Done To Me!
(When It's) Cactus Time in Arizona

Film adaptations: The 1932 RKO Radio Pictures production was very unlike the stage play except for its score. The film was tailored for the comic talents of Wheeler & Woolsey, a then-popular comedy team. In 1943, Metro-Goldwyn-Mayer produced a lavish version starring Mickey Rooney and Judy Garland. In 1965, MGM once again made the musical into a film, for Connie Francis. Unlike the previous two versions, the title was changed to When the Boys Meet the Girls. It co-starred Herman's Hermits, Sam the Sham and the Pharaohs, Louis Armstrong, and Liberace. A number of Gershwin songs were retained, including "Embraceable You", "Bidin' My Time", "But Not for Me", "Treat Me Rough", and "I Got Rhythm".

Two roles (June and Chesty) were eliminated during rehearsals. They were to have performed the song "Are You Dancing?".
The song "Embraceable You" needed to be restaged and Fred Astaire was brought in to do so. It was the first time that he and Ginger Rogers met. 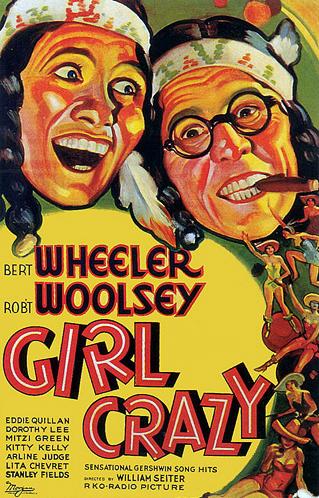 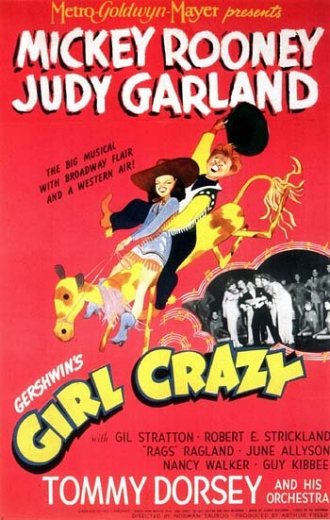 In the finale of the movie, a musical scene entitled "I Got Rhythm" Ginger Gray (played by Judy Garland) and Danny Churchill Jr. (played by Mickey Rooney) are lifted by a group of cowboys, while guns were going off around them. Garland was terribly afraid to do this shot, and Rooney had to coax her into it.

The musical play opened on Broadway in New York City, New York, USA on 14 October 1930 and had 272 performances. The leads were played by Ginger Rogers and Allen Kearns, but the cast also included Ethel Merman in her first Broadway production. She was featured in the "I Got Rhythm" number.

After Busby Berkeley finished directing the finale ("I Got Rhythm" number, which was filmed first), he was fired by producer Arthur Freed and replaced by Norman Taurog. The reasons vary: modern sources say he was way over budget and behind schedule. Freed himself claimed it was because of a personality clash with Judy Garland, who requested his dismissal.

"Bronco Busters" (music by George Gershwin, lyrics by Ira Gershwin), sung by Mickey Rooney, Judy Garland, Nancy Walker and chorus, was prerecorded but not filmed. The song is heard on the soundtrack CD from Rhino, and also on "The Mickey Rooney & Judy Garland Collection," a Warner Home Video release.

Another number, "Ginger Dear" by Roger Edens was recorded but deleted before release. 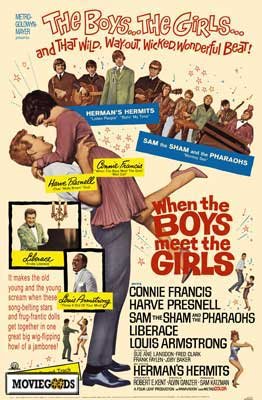 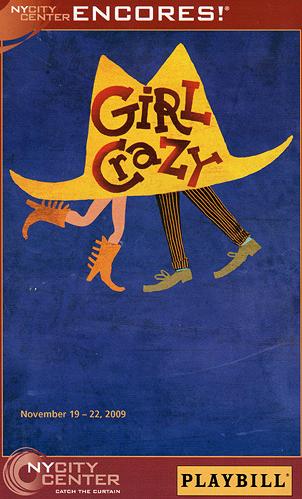