Based on libretto by Henri Meilhac and Ludovic Halevy, adapted from the story Carmen by Prosper Merimee. 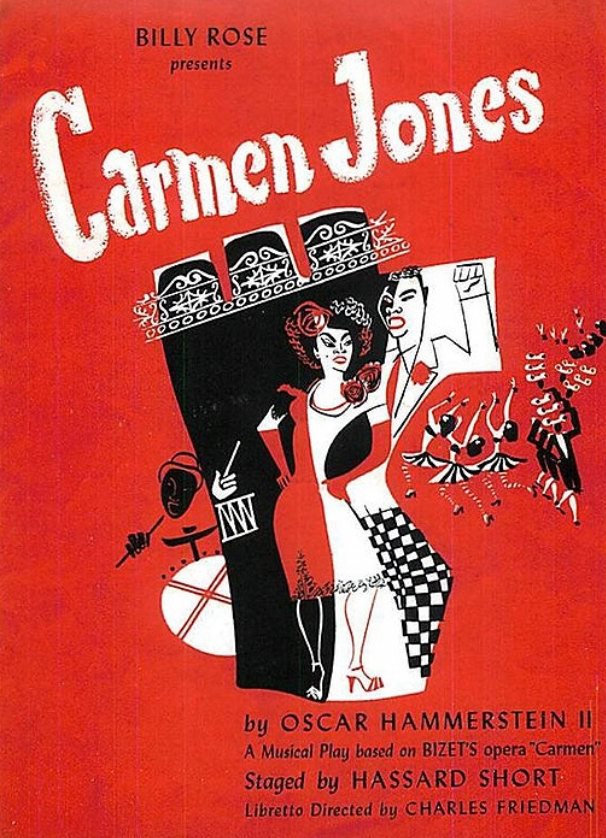 Originally, Max Gordon was to produce.
Rehearsals were originally to begin in September 1942. But when work on Oklahoma! took up more of writer Oscar Hammerstein II's time, the production was postponed. Because of the postponement, Max Gordon dropped out as producer. Not long after, Billy Rose came on as producer (Al Jolson was also trying to acquire the show).Commentaires longs: Auditions were held in Los Angeles, Chicago and New York searching for black performers who could sing the score. Of the 115 performers in the cast, only one had previous Broadway experience.

Muriel Smith, who played Carmen, had been cleaning film for a photographer in Philadelphia when she was cast. Luther Saxon (Joe) had been a checker at the Philadelphia Navy Yard. Glenn Bryant (Husky Miller) was a New York policeman on a leave of absence.

Other cast members included a Detroit social worker, a Cleveland housewife, a Los Angeles chauffeur, a Buffalo bellhop, and so on.

Agnes de Mille was announced as choreographer but Eugene Loring eventually took on the job when Ms. de Mille took on One Touch of Venus instead.

Once plans were solidified with Billy Rose as the new producer, rehearsals were announced as beginning on August 15, 1943. However, they did not begin until early October (at the Century Theatre).

There was a shortage of theaters in New York. Carmen Jones was sent on its pre-Broadway tour and remained there until a theatre was available. Rose had hoped that the show would go into New York the week of November 22.

The lack of available theaters didn't both Rose too much. The show played to capacity houses in Philadelphia. After the first week of performances, he sent a telegram to the New York Times, "As of Tuesday, Carmen Jones went clean in a 2,200 seat house that has been dark for several years. Business this week should top $30,000. If you run into Henry Kaiser, try to persuade him to put up a theatre for me on the Hippodrome lot in the next few weeks." (The Hippodrome was a 5000-seat theatre which had housed one of Billy Rose's biggest hits.)

United Artists approached Rose about the screen rights while the show was still in its Philadelphia tryout. UA had wanted to produce a film with an all-white cast in blackface starring Nelson Eddy.

Author's note: "Believing Carmen to be a perfect wedding of story and music, we have adhered, as closely as possible, to its original form. All the melodies – with a very few minor exceptions – are sung in their accustomed order. The small deviations we have made were only those which seemed honestly demanded by a transference of Carmen to a modern American background.

"In our elimination of the recitatif passages, we are not taking as great a liberty as may be supposed. Bizet and his collaborators originally wrote Carmen with spoken dialogue scenes betweeen the airs that were sung. The work was intended for theatres of average size, like the Opera Comique in Paris (where it is played today as a dialogue opera).

"Carmen' was not converted to a 'grand opera' until after Bizet's death. The music set to the dialogue is not his music. It was written by Ernest Guiraud." --Oscar Hammerstein II 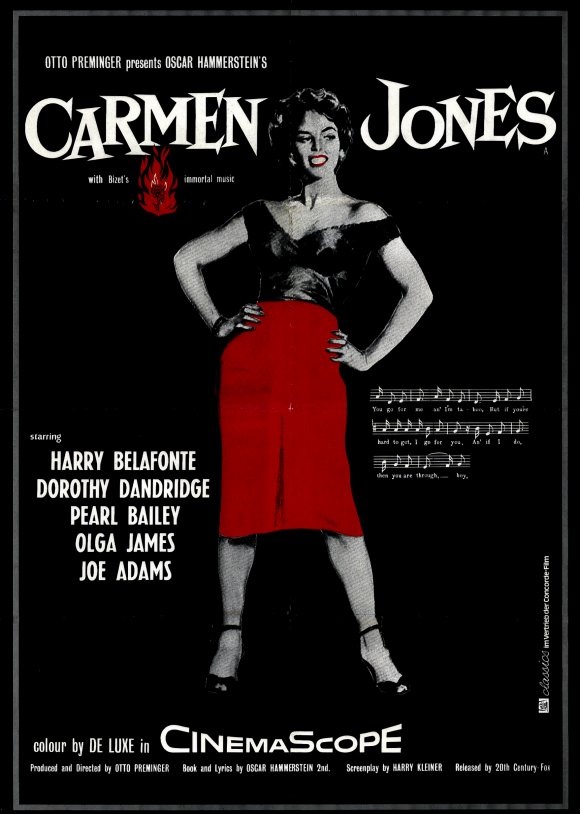 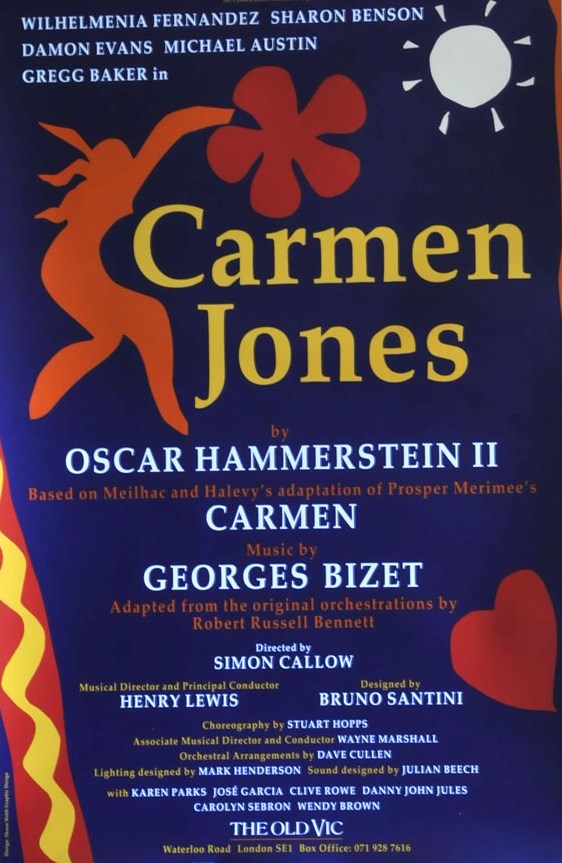 Type de série: Revival
Théâtre: Old Vic (Londres - Angleterre) Durée : 1 semaine Nombre : 730 représentationsPremière Preview : lundi 08 avril 1991Première : lundi 08 avril 1991Dernière : lundi 15 avril 1991Mise en scène : Simon Callow • Chorégraphie : Stuart Hopps • Producteur : Avec : Wilhelmina Fernandez/Sharon Benson (Carmen), Damon Evans/Michael Austin (Joe), Gregg Baker (Husky Miller), Karen Parks (Cindy-Lou), Clive Rowe, Llewellyn RayappenCommentaires : Using all the music from the opera “Carmen”, Oscar Hammerstein II provided completely new lyrics and a new setting. All the characters are Negro workers in a southern parachute factory during World War II. It is the story of Joe, an army corporal, and his love for the temptress, Carmen Jones, which ends with him stabbing her to death after she leaves him for the boxer, Husky Miller. The show was first produced on Broadway in December 1943 where it ran for 502 performances. This was its British premiere and it received something of a mixed reaction from the critics - mainly feeling the production and staging were a bit unadventurous, although the music and lyrics were much appreciated. However, it ran for one year and nine months and won several awards. During the course of its run the part of Joe was taken over by Gary Wilmot. 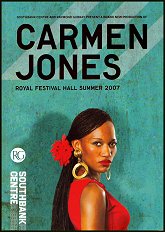