«Bridges of Madison County (The)»

THE BRIDGES OF MADISON COUNTY tells the story of Iowa housewife Francesca Johnson and her life-changing, four-day whirlwind romance with traveling photographer Robert Kincaid. It’s an unforgettable story of two people caught between decision and desire, as a chance encounter becomes a second chance at so much more.

Broadway
The musical opened on Broadway at the Gerald Schoenfeld Theatre in previews on January 17, 2014, and officially on February 20, 2014. The creative team remained the same, with additional credits for Hair and Wig design by David Brian Brown and Make-Up Design by Ashley Ryan. The orchestrations are by Jason Robert Brown.

The original cast featured Pasquale, Bashor, Martin, Marinkovich, Morgan, Allen, and Kinnunen reprising their roles. The new cast members were Kelli O'Hara as Francesca, Hunter Foster as Bud, Derek Klena as Michael, Ephie Aardema, Katie Klaus, Aaron Ramey, and Dan Sharkey.
O'Hara had been originally announced to appear in the Williamstown production, but because she expected her second child in September 2013, Elena Shaddow played Francesca instead.
The musical closed on May 18, 2014, after 137 performances.
A recording of the original Broadway cast was released in April 2014 (digital) and May 2014 (CD) on the Ghostlight label.

Subsequent productions
A US National tour, incorporating some minor changes, was announced by producers after the closing of the Broadway production. The tour began on November 28, 2015 at the Des Moines Civic Center in Des Moines, Iowa, with Brown conducting.[9] Additional stops include the Ahmanson Theatre in Los Angeles, California (starting December 8, 2015), the Hobby Center in Houston, Texas, The Smith Center for the Performing Arts in Las Vegas, Nevada, the Orpheum Theatre in Minneapolis, Minnesota, and the Kennedy Center in Washington, DC (June-July 2016). The tour stars Elizabeth Stanley as Francesca and Andrew Samonsky as Robert. The tour ends in Greenville, South Carolina, in July 2016.
The international premiere of the musical will be staged in Manila, the Philippines by Manila-based Atlantis Theatrical Entertainment Group. It will run from November 20, 2015 until December 6 at the Carlos P. Romulo Auditorium, RCBC Plaza, Makati. The production stars Joanna Ampil as Francesca and Mig Ayesa as Robert. It will be directed by Bobby Garcia, with choreography by Cecil Martinez, musical direction by Ceejay Javier, scenic design by Faust Peneyra, costumes by Eric Pineda, and lighting by Jonjon Villareal.

Acte II
State Road 21/The Real World - State Fair Singer, Michael, Carolyn and Company
Who We Are and Who We Want to Be - Robert, Francesca and Company
Almost Real - Francesca
Before and After You/One Second and a Million Miles - Robert and Francesca
When I'm Gone - Charlie, Bud and Company
It All Fades Away - Robert
Always Better - Francesca, Robert and Company

According to Playbill, the critical reviews were divided. Although the musical had "admirers who responded to Brown's score that mixed folk, country, pop and operatic passages, it failed to ignite wide audience appeal at the box office."

The musical was nominated for three 2014 Drama League Awards: Outstanding Production Of A Broadway Or Off-Broadway Musical and Distinguished Performance Award (Kelli O'Hara and Steven Pasquale). 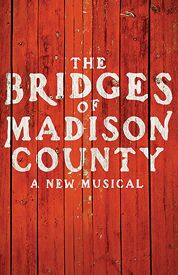 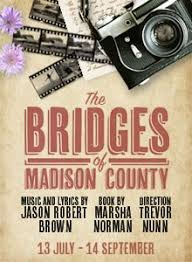