In Chicago, Gerry Siegal and Sally Nathan, a young suburban Chicago couple, decide to marry. The bride's Uncle Alfie (her guardian) wants an intimate wedding and wages a war of words with the groom's entire family. The groom's brassy Jewish mother Tillie commandeers the planning, steering it towards a large country club wedding (despite her husband's scolding her for taking over). Caterers, dressmakers, band leaders, rabbis, florists, photographers and a bossy wedding planner are pushed to the limit by the madcap preparations. The bride and groom, who have retained their sanity, realize that their families have almost destroyed the wedding. They announce their intention to have a quiet family affair.

Originally planned as a project for Gertrude Berg to be directed by Jerome Robbins, it opened in Philadelphia directed instead by Word Baker, who recently had staged The Fantasticks off-Broadway. With everything from the script to the score to the set in disarray, theatre producer Hal Prince was brought in to replace Baker and repair the damage. Poor box office prevented the out-of-town tryout from being extended and Prince, making his directorial debut, brought the show to New York City knowing it was better but still in need of serious work.

The Broadway production opened on January 27, 1962 at the Billy Rose Theatre, where it ran for 65 performances and five previews. The cast included neurotic comic Shelley Berman as Alfie, Eileen Heckart as Tillie, Rita Gardner as Sally, and Larry Kert as Gerry, with Morris Carnovsky, Cathryn Damon, Bibi Osterwald, and Linda Lavin in supporting roles.

An original cast recording was released by United Artists Records.

Act I
Anything for You
Beautiful
My Son, the Lawyer
Every Girl Wants to Get Married
Right Girls
Kalua Bay
There's a Room in My House
Siegal Marching Song
Nathan Marching Song
Harmony

Act II
Now, Morris
Wonderful Party
Revenge
Summer is Over
Harmony (Reprise)
I'm Worse Than Anybody
What I Say Goes
The Wedding 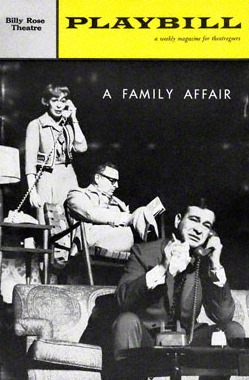