Paris is under siege by the forces of the Duke of Burgundy; popular support for King Louis XI is at a low point. Villon – poet, braggart, thief and darling of the Paris rabble – has sent anonymous love poems to the beautiful Katherine de Vaucelles. These have caused her to reject proposals from King Louis. She goes to seek the mysterious poet at an inn, but King Louis shadows her in disguise. Louis is incensed to hear Villon mocking the failures of his reign and saying what he would do instead "if I were king." The infuriated monarch reveals himself. The king gives Villon a hard choice: as punishment for speaking treasonously, he must either stop courting Katherine or accept the position of Grand Marshal, with all the powers of King, for 24 hours, during which time he must make good on his boasts and free Paris. At the end of the 24 hours, Villon will hang. Villon's dilemma is that he has promised himself to Huguette, his mistress, but now is deeply in love with Katherine.

Villon and Katherine declare their love for each other ("Only a Rose"). Hugette describes her means of livelihood ("Love for Sale"). Villon accepts Louis' challenge. Rather than sending the King's Scottish mercenaries against the Burgundians, Villon rouses the Paris mob to defend the city. Huguette discovers that Thibault, one of Louis's advisors, is a traitor. When Thibault ambushes Villon and tries to stab him to death, Huguette steps in front of the blade and takes the blow, thus sacrificing her life, and freeing Villon to be with Katherine. He kills Thibault in retaliation and then leads the Paris rabble to fight the Burgundians. The Parisians emerge victorious. After the battle is over, Katharine offers to sacrifice herself to the hangman in order to save Villon. Louis, realizing he cannot shed noble blood without a just cause, rewards Villon with exile instead of death, and the two lovers leave together.

In 1901, writer Justin Huntly McCarthy sentimentalized Villon's career in a novel, If I Were King, that borrowed the king-for-a-day theme, allowing Villon to defeat France's enemies and win the hand of an aristocratic lady, all in under 24 hours. The author adapted it as a Broadway play the same year and in London in 1902, and it was revived several times. In 1923, Richard Rodgers and Lorenz Hart were at the beginning of their careers. They created a musical version of the McCarthy play for a Manhattan girls' school and then looked for a more prestigious venue for their collaboration. Broadway backers turned down the young team, but producer Russell Janney "borrowed" their idea and commissioned the more established Rudolf Friml to compose, and Brian Hooker to adapt the piece into a musical, increasing the comedy roles.

The original production opened at the Casino Theatre on September 21, 1925. It starred Dennis King as Villon and Carolyn Thomson as Katherine and ran for a very successful 511 performances. The production was lavish and used an unusually large pit orchestra. It received unanimously enthusiastic reviews. The operetta then had a successful run in London in 1927 at the Winter Garden Theatre, running for 480 performances, and toured extensively. Its revivals include a 1943 Broadway revival. It was also performed regularly in the 1970s and 1980s in New York by the Light Opera of Manhattan.

A 1930 musical film with the same title was filmed in two-color Technicolor, with Dennis King reprising his stage role. Jeanette MacDonald and Lillian Roth co-starred. It was long thought lost, but was recovered and restored in 1998. Several non-Friml songs were added in this version. The film was remade in 1956 in regular Technicolor and VistaVision. It starred Kathryn Grayson, Oreste Kirkop, Rita Moreno, Walter Hampden and Cedric Hardwicke. Only a few songs were from the original, but new Friml numbers were added. Leslie Nielsen and Jack Lord were featured in villainous roles. This remake was not a success.

Act 1
Life is Like a Bubble in Our Glasses – Ensemble
Love for Sale – Huguette du Hamel, Chorus and Dance Ensemble
Drinking Song (A Flagon of Wine) – Guy Tabarie and Male Chorus
Song of the Vagabonds – Villon and Chorus
Some Day – Katherine de Vaucelles
Only a Rose and Finale – Katherine and Villon 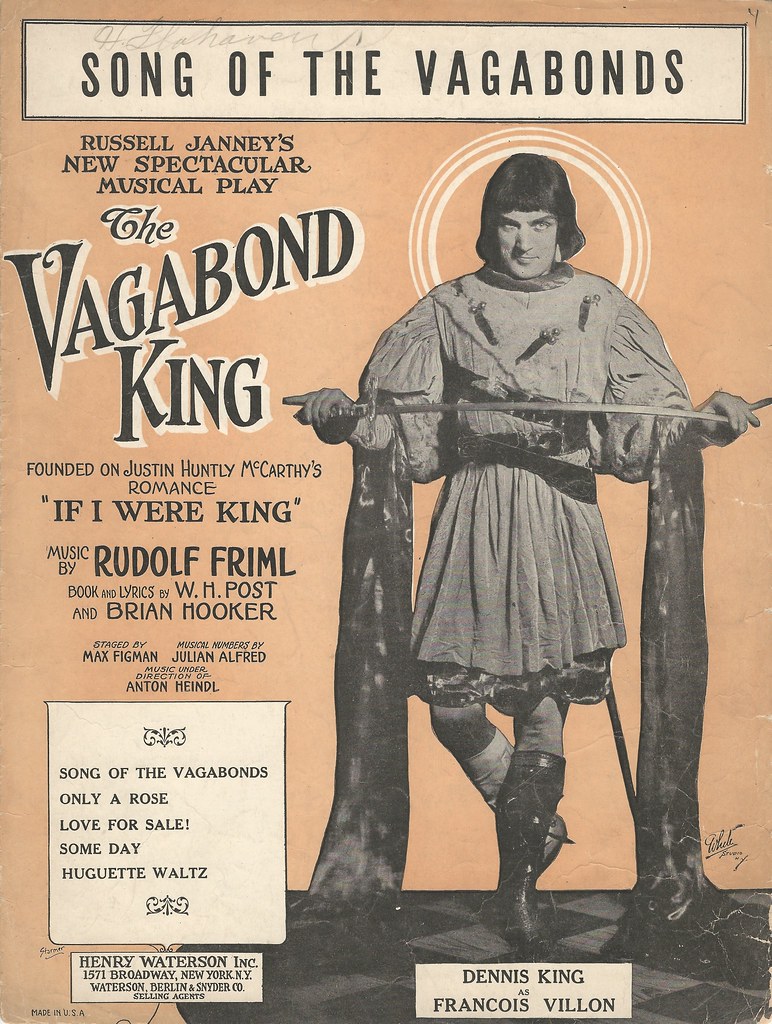