This musical thriller is set in darkest Victorian England and tells the infamous tale of Sweeney Todd - the demon barber of Fleet Street - who seeks revenge when a malicious Judge frames him, ravages his young wife and kidnaps his daughter Johanna. Together with Mrs Lovett - the enterprising proprietress of the pie shop downstairs - the pair form an innovative business partnership cooking up blood-curdling results.

The musical is based on the 1973 play Sweeney Todd, the Demon Barber of Fleet Street by Christopher Bond.

Original Broadway production and tour
The original production premiered on Broadway at the Uris Theatre on March 1, 1979 and closed on June 29, 1980 after 557 performances and 19 previews. Directed by Hal Prince and choreographed by Larry Fuller, the scenic design was by Eugene Lee, costumes by Franne Lee and lighting by Ken Billington. The cast included Angela Lansbury as Mrs. Lovett, Len Cariou as Todd, Victor Garber as Anthony, Sarah Rice as Johanna, Merle Louise as the Beggar Woman, Ken Jennings as Tobias, Edmund Lyndeck as Judge Turpin, Joaquin Romaguera as Pirelli, and Jack Eric Williams as Beadle Bamford. The production was nominated for nine Tony Awards, winning eight including Best Musical. Dorothy Loudon and George Hearn replaced Lansbury and Cariou on March 4, 1980.
The first national US tour started on October 24, 1980, in Washington, D.C. and ended in August 1981 in Los Angeles, California. Lansbury was joined by Hearn and this version was taped during the Los Angeles engagement and broadcast on PBS on September 12, 1982.
A North American tour started on February 23, 1982, in Wilmington, Delaware, and ended on July 17, 1982, in Toronto, Ontario. June Havoc and Ross Petty starred.

1989 Broadway revival
The first Broadway revival opened on September 14, 1989 at the Circle in the Square Theatre, and closed on February 25, 1990 after 189 performances and 46 previews. It was produced by Theodore Mann, directed by Susan H. Schulman, with choreography by Michael Lichtefeld. The cast featured Bob Gunton (Sweeney Todd), Beth Fowler (Mrs. Lovett), Eddie Korbich (Tobias Ragg), Jim Walton (Anthony Hope) and David Barron (Judge Turpin). The production was originally produced Off-Off-Broadway by the York Theatre Company at the Church of the Heavenly Rest from March 31, 1989 to April 29, 1989. This production received four Tony Award nominations: for Best Revival of a Musical, Best Actor in a Musical, Best Actress in a Musical and Best Direction of a Musical, but failed to win any.

1993 West End revival
In 1993, the show received its first West End revival at the National Theatre. The production opened originally at the Cottesloe Theatre on June 2, 1993, and later transferred to the Lyttleton Theatre on December 16, 1993, playing in repertory and closing on June 1, 1994. The show's design was slightly altered to fit a proscenium arch theatre space for the Lyttleton Theatre. The director was Declan Donnellan and the Cottesloe Theatre production starred Alun Armstrong as Todd and Julia McKenzie as Mrs. Lovett, with Adrian Lester as Anthony, Barry James as Beadle Bamford and Denis Quilley as Judge Turpin. Quilley had originated the title role in the original London production in 1980. When the show transferred, Quilley replaced Armstrong in the title role. Sondheim praised Donnellan for the "small 'chamber' approach to the show which was the composer's original vision for the piece." This production received Olivier Awards for Best Musical Revival, Best Actor in a Musical (Armstrong) and Best Actress in a Musical (McKenzie), as well as nominations for Best Director and two for Best Supporting Performance in a musical.

2004 London revival
In 2004, John Doyle directed a revival of the musical at the Watermill Theatre in Newbury, England, running from July 27, 2004 until October 9, 2004. This production subsequently transferred to the West End's Trafalgar Studios and then the Ambassadors Theatre. This production was notable for having no orchestra, with the 10-person cast playing the score themselves on musical instruments that they carried onstage. This marked the first time in nearly ten years that a Sondheim show had been presented in the commercial West End. It starred Paul Hegarty as Todd, Karen Mann as Mrs. Lovett, Rebecca Jackson as The Beggar Woman, Sam Kenyon as Tobias, Rebecca Jenkins as Johanna, David Ricardo-Pearce as Anthony and Colin Wakefield as Judge Turpin. This production closed February 5, 2005.

2005 Broadway revival
A version of the John Doyle West End production transferred to Broadway, opening on November 3, 2005 at the Eugene O'Neill Theatre with a new cast, all of whom played their own instruments, as had been done in London. The cast consisted of: Patti LuPone (Mrs. Lovett/Tuba/Percussion), Michael Cerveris (Todd/Guitar), Manoel Felciano (Tobias/Violin/Clarinet/Piano), Alexander Gemignani (Beadle/Piano/Trumpet), Lauren Molina (Johanna/Cello), Benjamin Magnuson (Anthony/Cello/Piano), Mark Jacoby (Turpin/Trumpet/Percussion), Donna Lynne Champlin (Pirelli/Accordion/Flute/Piano), Diana DiMarzio (Beggar Woman/Clarinet) and John Arbo (Fogg/Double bass). The production ran for 384 performances and was nominated for six Tony Awards, winning two: Best Direction of a Musical for Doyle and Best Orchestrations for Sarah Travis who had reconstructed Jonathan Tunick's original arrangements to suit the ten-person cast and orchestra. Because of the small scale of the musical, it cost $3.5 million to make, a sum small in comparison to many Broadway musicals and recouped in nineteen weeks.[15] A national tour based on Doyle's Broadway production began on August 30, 2007 with Judy Kaye (who had temporarily replaced LuPone in the Broadway run) as Mrs. Lovett and David Hess as Todd. Alexander Gemignani also played the title role for the Toronto run of the tour in November 2007.

2012 London revival
Michael Ball and Imelda Staunton starred in a new production of the show which played at The Chichester Festival Theatre, running from 24 September to 5 November 2011. Directed by Jonathan Kent, the cast included Ball as Todd, Staunton as Mrs. Lovett, James McConville as Tobias, John Bowe as Judge Turpin, Robert Burt as Pirelli, Luke Brady as Anthony, Gillian Kirkpatrick as Lucy Barker, Lucy May Barker as Johanna and Peter Polycarpou as Beadle Bamford. It notably takes place in the 1930s instead of 1846 and restored the oft-cut song "Johanna (Mea Culpa)". The production received positive reviews from both critics and audience members and transferred to the Adelphi Theatre in the West End in 2012 for a limited run from March 10 until September 22. The West End transfer received six Laurence Olivier Award nominations of which it won the three; Best Musical Revival, Best Actor in a Musical for Ball and Best Actress in a Musical for Staunton.

Notes on the songs:

† Despite being cut in previews for reasons of length, these numbers were included on the Original Cast Recording. It has been restored in subsequent productions.
‡ This song is after "The Contest" in the 2005 Broadway Revival.
§ This number was written for the London production and first recorded for the 2000 New York Philharmonic concert performance.

Sweeney Todd/Benjamin Barker: Morose and brooding, a barber by profession who returned to London (after fifteen years of unjust incarceration in an Australian penal colony) to seek revenge first on the corrupt judge who sent him there, and then simply on whoever proves unfortunate enough to end up in his shop.
Mrs. Nellie Lovett: A cheery and chatty but wholly amoral restaurateur whose business has become run down due to a scarcity of meat and who would like to be more than a landlady to Mr. Todd.
Anthony Hope: A young, naïve sailor who has rescued Todd and falls in love with Johanna Barker.
Johanna Barker : Todd's beautiful young daughter, claimed by Judge Turpin as his own ward.
Judge Turpin : A corrupt and depraved judiciary official who twists the system to serve his own ends and who has become infatuated by Johanna as she has matured.
Tobias Ragg : A simple young lad who works first for Pirelli, and then for Mrs. Lovett, but does not trust Todd.
Beadle Bamford Turpin's right-hand man and accomplice to his dirty deeds.
Beggar Woman/Lucy Barker: A mad crone with a filthy tongue whose interjections go unheeded, but who is eventually revealed to be Lucy Barker, the wife of Benjamin Barker.
Adolfo Pirelli/Danny O'Higgins: An Irish charlatan and former employee of Benjamin Barker's who has since developed a public persona as a flashy, Italian barber; he attempts to blackmail Todd whom he ultimately recognizes from his youth. (In some productions, Pirelli has been played by a woman but still portrayed as a male character.) 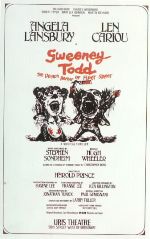 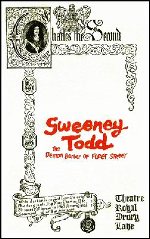 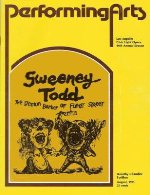 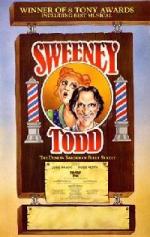 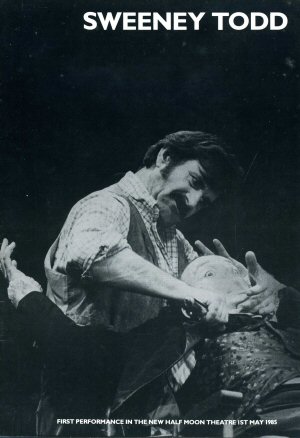 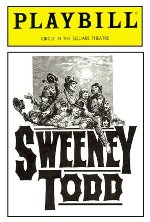 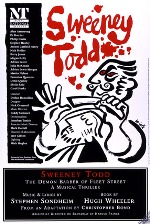 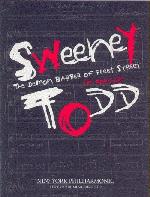 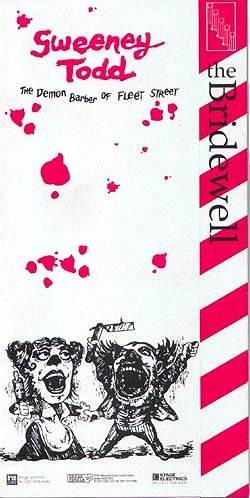 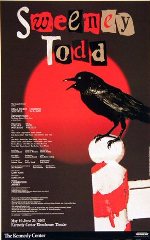 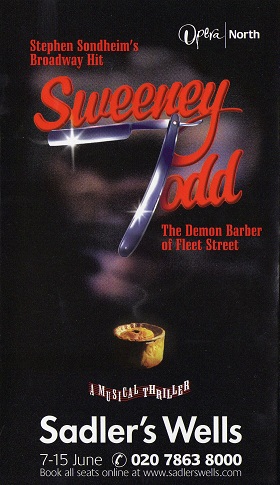 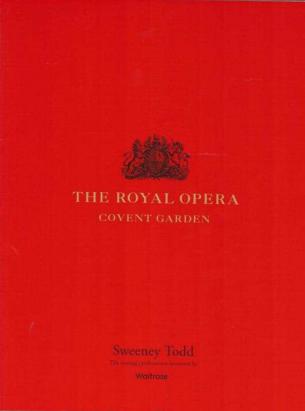 Type de série: Revival
Théâtre: Royal Opera House (Londres - Angleterre) Salle : Main AuditoriumDurée : 1 mois Nombre : 9 représentationsPremière Preview : lundi 15 décembre 2003Première : lundi 15 décembre 2003Dernière : mercredi 14 janvier 2004Mise en scène : Neil Armfield • Chorégraphie : Avec : Thomas Allen (Sweeney Todd), Felicity Palmer (Mrs Lovett), William Dazely (Anthony), Jonathan Veira (Judge Turpin), Rebecca Evans (Joanna), Doug Jones (Tobias), Bonaventura Bottone (Pirelli), Rosalind Plowright (Beggar Woman), Robert Tear (Beadle)Commentaires : This production originated at the Lyric Opera House Chicago where its performance was accepted without question. When it came to Covent Garden it was subject to much discussion. Was it an “opera” or a “musical”? Did it really belong in the Opera House? Did it work when performed by proper opera singers rather than musical theatre actors? Did it really need the radio microphones that were used? And, since it was sung in English, why did the production use sur-tities? The critics mused and differed on all these questions, but were almost unanimous in agreeing that the score, with a 50 piece orchestra, conducted by the legendary Paul Gemignani, would probably never be better performed. The physical production was a bit sparse, and the opera chorus occasionally looked uncomfortable when required to “act” - but, all in all, this was regarded as a feather in the cap of the Royal Opera (even if not quite as glorious a feather as the recent Opera North version at Sadler’s Wells.)En savoir plus sur cette version 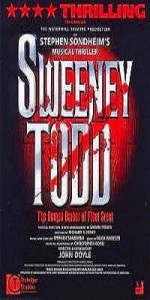 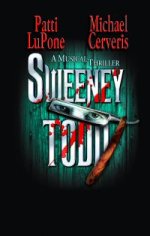 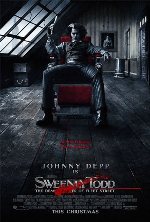 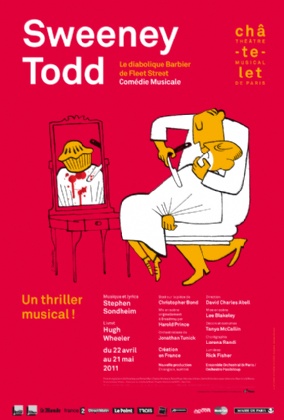 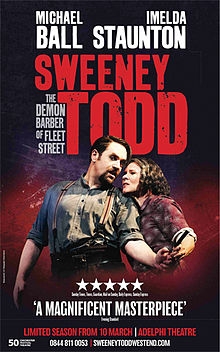 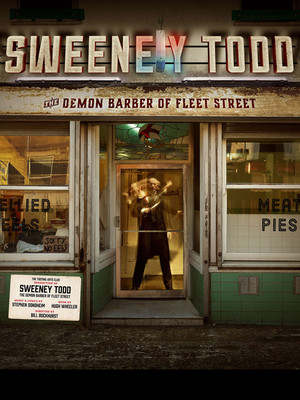 For this Off-Broadway transfer, the cosy Barrow Street Theatre has been reconfigured to capture the close atmosphere of Harrington's, and pies will once again be served up for those brave enough to sample Mrs Lovett's culinary skills. Bill Buckhurst, who oversaw the London staging, will direct.En savoir plus sur cette version