Coward was in the middle of an extensive Asian tour when he contracted influenza in Shanghai. He spent the better part of his two-week convalescence sketching out the play and then completed the actual writing of the piece in only four days. He immediately cabled Gertrude Lawrence in New York to ask her to keep autumn 1930 free to appear in the play. After spending a few more weeks revising it, he typed the final draft in The Cathay Hotel in Shanghai and sent copies to Lawrence and his producer and manager, John C. Wilson, with instructions to cable him with their reactions.

Coward received no fewer than 30 telegrams from Lawrence about the play. She first said that she had read the play and there was "nothing wrong with it that can't be fixed." Coward "wired back curtly that the only thing that was going to be fixed was her performance." Lawrence was indecisive about what to do about her previous commitment to André Charlot. Coward finally responded that he planned to cast the play with another actress. By the time he returned to London, he found Lawrence not only had cleared her schedule but was staying at Edward Molyneux's villa in Cap-d'Ail in southeastern France learning her lines. Coward joined her, and the two began rehearsing the scenes they shared. At the end of July they returned to London where Coward began to direct the production. Coward played the part of Elyot Chase himself, Adrianne Allen was his bride Sibyl, Lawrence played Amanda Prynne, and Laurence Olivier was her new husband Victor. Coward wrote Sibyl and Victor as minor characters, "extra puppets, lightly wooden ninepins, only to be repeatedly knocked down and stood up again". He later insisted, however, that they must be credible new spouses for the lead characters: "We've got to have two people as attractive as Larry and Adrianne were in the first place, if we can find them."

Rehearsals were still under way when the Lord Chamberlain took exception to the second act love scene, labelling it too risqué in light of the fact the characters were divorced and married to others. Coward went to St. James's Palace to plead his case by acting out the play himself and assuring the censor that with artful direction the scene would be presented in a dignified and unobjectionable manner. Coward repeats one of his signature theatrical devices at the end of the play, where the main characters tiptoe out as the curtain falls – a device that he also used in Present Laughter, Hay Fever and Blithe Spirit.

The play contains one of Coward's most popular songs, "Some Day I'll Find You". The Noël Coward Society's website, drawing on performing statistics from the publishers and the Performing Rights Society, ranks it among Coward's ten most performed songs.


Produced by C. B. Cochran, the play premiered on 18 August 1930, at the King's Theatre in Edinburgh, directed by Coward and starring Coward as Elyot, Adrianne Allen as Sibyl, Gertrude Lawrence as Amanda, and Laurence Olivier as Victor. Sets and costumes were designed by Gladys Calthrop. After successfully touring Liverpool, Birmingham, Manchester and Southsea for five weeks, the production opened the new Phoenix Theatre in London on 24 September 1930. A week after the play opened, Heinemann published the text; a week later, HMV issued recordings of scenes from the play performed by Coward and Lawrence. Coward disliked appearing in long runs, and the London run was therefore a limited three-month season. It sold out within a week and was still playing to packed houses when, despite "the gratifying knowledge that we could have run on for another six [months]," it ended on 20 December 1930.

The first Broadway production opened at the Times Square Theatre on 27 January 1931 with Coward, Lawrence and Olivier reprising their roles and Jill Esmond, who had married Olivier a few months earlier, as Sibyl. Walter Winchell described the production as "something to go quite silly over." The New York critics were enthusiastic about the play and Coward's performance. A few weeks before Coward and Lawrence were scheduled to be replaced by Otto Kruger and Madge Kennedy, Lawrence collapsed with a combined attack of laryngitis and nervous exhaustion. Coward appeared at five performances with her understudy, and then closed the production for two weeks to allow Lawrence to recuperate. She returned, and the two continued in their roles until 9 May 1931. The production ran a total of 256 performances.

Major revivals (1940s to 1970s)
The first West End revival was at the Apollo Theatre in 1944 starring John Clements and Kay Hammond.[20] Googie Withers took over as Amanda during the run. Over the years, the play has been revived on Broadway six times. The first of these, in 1948, starred Tallulah Bankhead as Amanda and Donald Cook as Elyot, with Barbara Baxley as Sibyl and William Langford as Victor, in a production directed by Martin Manulis at the Plymouth Theatre, where it ran for 248 performances. The production toured all but three states of the U.S., and grossed more than $1.5 million. Coward went to see the production "with my heart in my boots and was very pleasantly surprised ... her vitality was amazing, and, strange to say, she played the love scene quite beautifully."

In 1963, at the start of what Coward called "Dad's Renaissance", a London revival directed by James Roose-Evans at the Hampstead Theatre Club heralded Coward's return to critical favour. The success of the production, with Edward de Souza as Elyot and Rosemary Martin as Amanda, led to its transfer to the Duke of York's Theatre. The West End producer wanted to cast established stars in the transfer, but Coward insisted that the young Hampstead cast should be retained. It ran in the West End for 212 performances. A May 1968 Off-Broadway production directed by Charles Nelson Reilly starred Elaine Stritch as Amanda, and ran for nine performances at the Theatre de Lys. A 1969 production, directed by Stephen Porter and starring Brian Bedford as Elyot and Tammy Grimes as Amanda (winning a Tony Award for her performance), with David Glover as Victor and Suzanne Grossman as Sibyl, opened at Broadway's Billy Rose Theatre and then moved to the Broadhurst Theatre to complete its run of 198 performances. The last major revival during Coward's lifetime was at London's Queen's Theatre in 1972. It was directed by John Gielgud and starred Maggie Smith and Robert Stephens. During the run of the production, John Standing took over as Elyot, and Jill Bennett was a replacement as Amanda. Gielgud directed a 1975 Broadway transfer of his production, starring Maggie Smith and John Standing at the 46th Street Theatre, where it ran for 92 performances. In 1978, Smith reprised her role (alongside Brian Bedford) in a Stratford Festival production of the play.

Major revivals (1980s to present)
In 1980, a production from the Greenwich Theatre transferred to the Duchess Theatre in the West End. It starred Michael Jayston and Maria Aitken, and it was directed by Alan Strachan. Elizabeth Taylor as Amanda and Richard Burton as Elyot were the headliners in a highly anticipated 1983 Broadway production directed by Milton Katselas, which opened at the Lunt-Fontanne Theatre in May 1983 following a pre-Broadway run at the Shubert Theatre in Boston in April 1983. It co-starred John Cullum as Victor and Kathryn Walker as Sibyl and ran for 63 performances. After closing on Broadway, this production toured to the John F. Kennedy Center for the Performing Arts in August and September 1983, the Shubert Theatre, Chicago in September, and the Wilshire Theatre, Los Angeles in October 1983.

In 1990, a revival at London's Aldwych Theatre, starring Keith Baxter and Joan Collins, directed by Tim Luscombe, was not well received, although Sara Crowe won an Olivier Award, Actress in a Supporting Role, as Sibyl. Arvin Brown directed Collins as Amanda and Simon Jones as Elyot in a 1992 Broadway production that closed after only 11 previews and 37 performances at the Broadhurst Theatre. The last West End production of the 20th century was at the National Theatre, running from May to September 1999, with Anton Lesser as Elyot and Juliet Stevenson as Amanda, directed by Philip Franks.

A 2001 London revival emphasised the harshness and darker side of the play; it starred Alan Rickman and Lindsay Duncan, directed by Howard Davies at the Albery Theatre (subsequently renamed the Noël Coward Theatre). Duncan won the Olivier Award for her performance, Tim Hatley won for his set designs, and Jenny Beavan won for costumes. A Broadway transfer of Davies's West End production, starring Rickman and Duncan, ran for 127 performances at the Richard Rodgers Theatre in 2002. It won the Tony Award for Best Revival, while Duncan won for Leading Actress and Hatley won for sets. In 2009 at its new home, the Hampstead Theatre presented a revival directed by Lucy Bailey, with Jasper Britton as Elyot and Claire Price as Amanda.

A 2010 revival at the Vaudeville Theatre in London was directed by Richard Eyre and starred Matthew Macfadyen as Elyot and Kim Cattrall as Amanda. The ten-week limited season ran from February to May 2010. This production then moved to North America, starring Cattrall and Paul Gross. It had tryouts in Toronto from 16 September to 30 October 2011 and played on Broadway at the Music Box Theatre from 6 November, with an official opening on 17 November. Simon Paisley Day played Victor, and Anna Madeley played Sibyl. The production closed early, on 31 December 2011.

A production ran at the Chichester Festival Theatre from 28 September (previews from 21 September) to 27 October 2012, starring Anna Chancellor as Amanda and Toby Stephens as Elyot, with Anthony Calf as Victor and Anna-Louise Plowman as Sibyl. It was directed by Jonathan Kent. This production was reprised with the same cast at the Gielgud Theatre, in London, from 3 July (previews from 22 June) to 21 September 2013. This performance was broadcast to participating cinemas in the UK from 6 February 2014, and in the US on 11 December 2013, by CinemaLive and Digital Theatre in their West End Theatre Series. 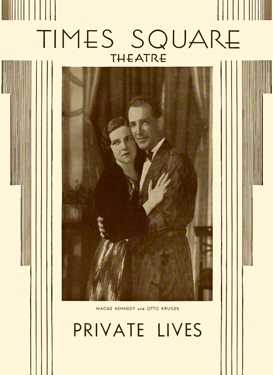 Type de série: Revival
Théâtre: National Theatre (Londres - Angleterre) Salle : Lyttelton TheatreDurée : 3 mois 3 semaines Nombre : 91 représentationsPremière Preview : vendredi 07 mai 1999Première : jeudi 13 mai 1999Dernière : lundi 06 septembre 1999Mise en scène : Philip Franks • Chorégraphie : Producteur : Avec : Juliet Stevenson, Anton Lesser Dominic Rowan, Rebecca Saire, Darlene JohnsonPresse : SHERIDAN MORLEY describes the play as a "loving revival". JOHN THAXTER of THE STAGE says the show is "set to be a hit", but goes on to say "this production is not one for Coward purists". NICHOLAS DE JONGH of THE EVENING STANDARD says the show is "Miscast" and goes on to say, "This handsome comedy of manners is left scarred and sagging." CHARLES GODFREY-FAUSETT of TIME OUT describes the play as "Stirring" and "Gutsy".JOHN PETER of THE SUNDAY TIMES says, "This is a first-rate production, observant,precisely paced, and irresistibly and liberatingly funny." THE DAILY EXPRESS says, "There's genuine moral depravity on display here - when you stop chuckling long enough to think about it, that is." THE DAILY MAIL says, "Noel Coward's perfectly constructed comedy has been given a thorough but only intermittently funny revival in the Lyttelton." 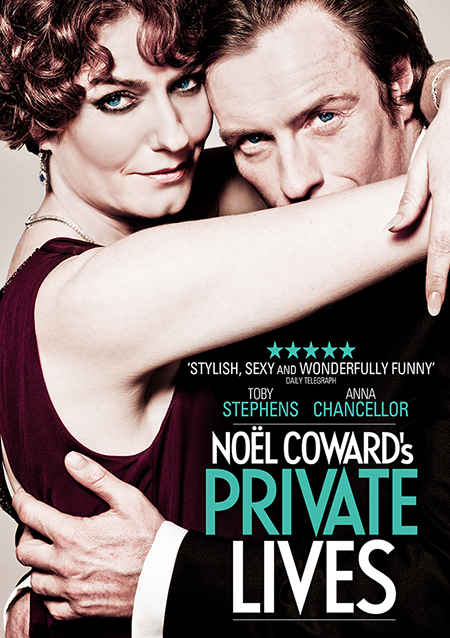 "The lack of raw passion might not matter so much if Kent's production had the lightness of touch to get away with it, but after a sublimely delicate first act, he loses his hold on the comedy." Lyn Gardner for The Guardian

"This is a comedy that in Jonathan Kent’s superb production feels forever young, fresh and delightful...This is a gloriously entertaining evening, opulently designed by Anthony Ward, and offering two hours of comic bliss." Charles Spencer for The Daily Telegraph