Design for Living was a success on Broadway in 1933, but it has been revived less often than Coward's other major comedies. Coward said, "it was liked and disliked, and hated and admired, but never, I think, sufficiently loved by any but its three leading actors." The play was adapted into a film in 1933, directed by Ernst Lubitsch, with a screenplay by Ben Hecht, and starring Fredric March, Gary Cooper, and Miriam Hopkins. It first played in London in 1939 and has enjoyed a number of stage revivals.

Coward had known Alfred Lunt and Lynn Fontanne since his first trip to New York in 1921, when he was penniless, and they were scarcely better off. Dreaming of future stardom, they resolved that when all three were famous, Coward would write a play for them all to star in. In the following decade, Coward became one of the world's most famous playwrights, with a succession of popular hits. These ranged from the operetta Bitter Sweet (1929) and the extravaganza Cavalcade (1931), to the intimate comedies Hay Fever (1924) and Private Lives (1930). Lunt and Fontanne too had achieved fame, and by the early 1930s the time was right for Coward to write their star vehicle.

The Lunts' marriage was devoted and long-lived, but there were triangular relationships in their private lives which Coward could draw on for his plot. Coward recorded that while he was refining his original ideas for the play, "Alfred had suggested a few stage directions which if followed faithfully, would undoubtedly have landed all three of us in gaol". Of the three principal characters, Coward later commented: "These glib, over-articulate and amoral creatures force their lives into fantastic shapes and problems because they cannot help themselves. Impelled chiefly by the impact of their personalities each upon the other, they are like moths in a pool of light, unable to tolerate the lonely outer darkness but equally unable to share the light without colliding constantly and bruising each other's wings.... The ending of the play is equivocal. The three of them... are left together as the curtain falls, laughing.... Some saw it as the lascivious anticipation of a sort of a carnal frolic. Others with less ribald imaginations regarded it as a meaningless and slightly inept excuse to bring the curtain down. I as author, however, prefer to think that Gilda and Otto and Leo were laughing at themselves."

Original production
Design for Living previewed in Cleveland, Ohio on 2 January 1933 and opened in New York on 24 January, at the Ethel Barrymore Theatre on Broadway to popular and critical acclaim. In The New York Times, Brooks Atkinson described it as a play of "skill, art and clairvoyance, performed by an incomparable trio of comedians. ... Miss Fontanne with her slow, languorous deliberation, Mr Lunt with his boyish enthusiasm, Mr Coward with his biting, nervous clarity. ... Skill, art, even erudition of a sort have gone into this gay bit of drollery." The New York Sun called it "as happy a spectacle of surface skating as one might see," adding that the skaters were "sometimes on very thin ice." For the opening night, the price of tickets more than quintupled, and the three stars were reported to be receiving record salaries for a Broadway production.

Revivals
The first London production of Design for Living opened at the Haymarket Theatre on 25 January 1939, later transferring to the Savoy Theatre, and running for 233 performances. The run was cut short by the outbreak of World War II. Gilda was played by Diana Wynyard, Otto by Anton Walbrook and Leo by Rex Harrison. By the time the play made its delayed debut in London Ivor Brown thought it "very much of its time and already seems a trifle faded. It will not be long before they revive it in costume as a specimen comedy of 'early thirties' manners."

In 1944 it was performed at the Prince of Wales Theatre in Birmingham from 13 November.

As part of Play of the Week in August 1964 four Coward plays directed and produced by Joan Kemp-Welch were transmitted on ITV, including Design for Living with Jill Bennett as Gilda, Daniel Massey as Leo, and John Wood as Otto.

The first major revival was at the Phoenix Theatre, London, shortly after Coward's death in 1973. Vanessa Redgrave played Gilda, with John Stride and Jeremy Brett as Otto and Leo. In 1982, at the Globe Theatre, Maria Aitken, Gary Bond and Ian Ogilvy played the lead roles.

The first Broadway revival was in 1984 at Circle in the Square Theater, directed by George C. Scott, starring Jill Clayburgh as Gilda, Raul Julia as Leo and Frank Langella as Otto.

A 1994 revival of the play directed by Sean Mathias at the Donmar Warehouse theatre emphasised the sexual overtones of the play. Though the Coward estate has been wary of radical reinterpretations of the plays, the author's partner, Graham Payn, attended at least one performance. The production featured Rachel Weisz, Paul Rhys and Clive Owen. It transferred to the West End with Weisz, Rupert Graves and Marcus D'Amico. Rupert Everett stood in for Graves in at least one performance during the run.

In July 2002 Marianne Elliott directed a production for the Royal Exchange, Manchester with Victoria Scarborough as Gilda, Ken Bones as Ernest and Oliver Milburn as Otto.

London's Old Vic Theatre staged a revival in 2010, with Tom Burke as Otto, Lisa Dillon as Gilda, and Andrew Scott as Leo.

Spectator thought it a pity the play had not been staged earlier because it now seemed “a little old-fashioned.” 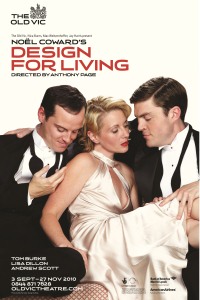 "A long and largely unrewarding slog." Charles Spencer for The Daily Telegraph

"The first act is chewy and the second is interminable. The end is definitely worth seeing." Quentin Letts for The Daily Mail

"Slick and stylish production ." Julie Carpenter for The Daily Express

"Although the production could do with some neat cuts, it is full of intriguing subtleties and symmetries, cleverly accentuated. And the stellar acting makes Coward’s comic lines seem piercingly precise." Henry Hitchings for The Evening Standard