The show consists of "traditional material ... routines going back 50 to 60 years. It contains standard songs such as 'Don't Blame Me' and 'I Feel a Song Comin' On', interspersed with newly created musical numbers, including 'The Sugar Baby Bounce' ". The show had burlesque "tropes" such as the swing number, the sister act, the fan dance, the vaudeville dog act. It was all fast and funny and it ended with a patriotic number...with the entire company in red, white, and blue with a flag background and Miller as the Statue of Liberty." 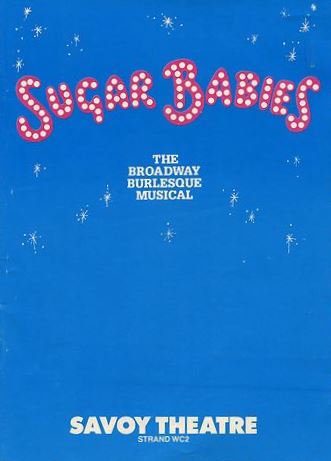 Type de série: Original London
Théâtre: Savoy Theatre (Londres - Angleterre) Durée : 3 mois 2 semaines Nombre : 127 représentationsPremière Preview : InconnuPremière : Tuesday 20 September 1988Dernière : Saturday 07 January 1989Mise en scène : Ralph G. Allen • Chorégraphie : Producteur : Avec : Mickey Rooney, Ann Miller, Rhonda Burchmore, Chris Emmett, Peter Reeves, Len Howe, Bryan Burdon, Michael DavisCommentaires : This was a show plagued by injury and postponement. Originally planned to open in the middle of August, it was delayed for a month after Ann Miller suffered an injury. However, once it opened it was acclaimed as a glorious throw-back to the days of variety - a dove act, a juggling act, and a series of sketches in a schoolroom, in a court-room, and a flag-waving finale. Ann Miller and Mickey Rooney won over the critics and audiences alike with their “professionalism and sheer class”. The production had opened in New York in 1979 and had been touring more or less ever since.