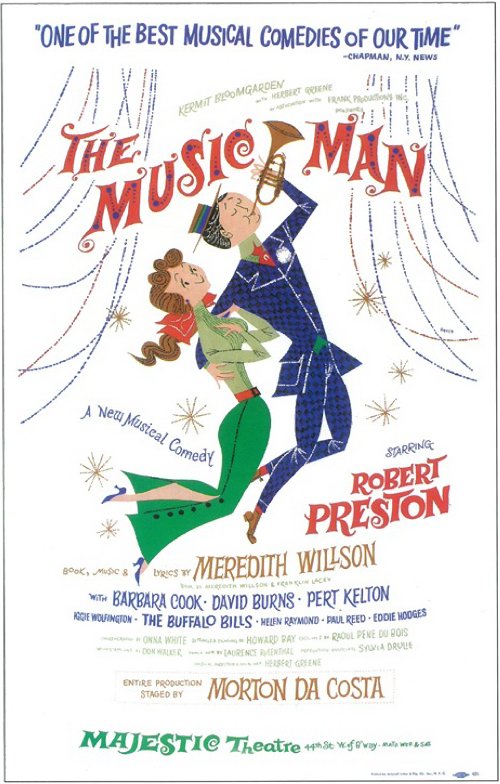 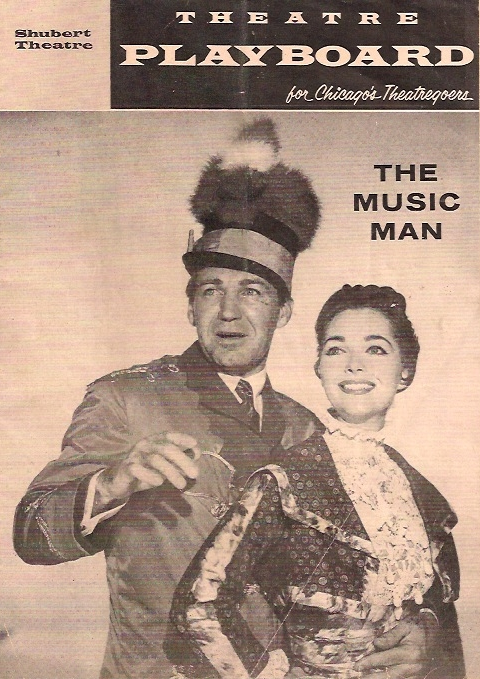 Type de série: Film
Théâtre: *** Film (*** - ***) Durée : Nombre : Première Preview : InconnuPremière : Tuesday 19 June 1962Dernière : InconnuMise en scène : Morton Da Costa • Chorégraphie : Producteur : Avec : Robert Preston as Harold Hill / Shirley Jones as Marian Paroo / Buddy Hackett as Marcellus Washburn / Paul Ford as Mayor George Shinn / Hermione Gingold as Eulalie Mackechnie Shinn / Pert Kelton as Mrs. Paroo / Vern Reed as Jacey Squires / Al Shea as Ewart Dunlop / Bill Spangenberg as Olin Britt / Wayne Ward as Oliver Hix / Timmy Everett as Tommy Djilas / Susan Luckey as Zaneeta Shinn / Ronny Howard as Winthrop Paroo / Harry Hickox as Charlie Cowell / Charles Lane as Constable Locke / Adnia Rice as Alma Hix / Peggy Mondo as Ethel Toffelmier / Mary Wickes as Mrs. Squires / Sara Seegar as Maud Dunlop / Ronnie Dapo as Norbert Smith / Jesslyn Fax as Avis Grubb / Monique Vermont as AmaryllisCommentaires longs: Unusual for a musical film at the time, Morton DaCosta, who had directed the show onstage, not only directed the film, but produced it as well, ensuring that the film was extremely faithful to the show. The actress Pert Kelton and the Buffalo Bills also reprised their stage roles. All of the show's songs were retained for the film with the exception of "My White Knight", which was replaced by "Being in Love" (this new song included some of the original song's lyrics); and "It's You", a barbershop quartet number which opens the second act of the play.

Several phrases were altered for the film, as the writers felt they were too obscurely Midwestern to appeal to a broader audience; "Jeely kly!" is Tommy Djilas's catchphrase in the play, while in the film he exclaims, "Great honk!" The word "shipoopi" has no meaning and was concocted by Willson for the show.

Shirley Jones found out she was pregnant while filming was already underway; the costume designers kept having to adjust her dresses to conceal her pregnancy. In the scene at the footbridge when Marian and Harold embrace, Shirley Jones says that baby Patrick kicked hard enough for Robert Preston to feel him.

To film the final parade scene in 1962, Jack L. Warner selected The University of Southern California's marching band, the Spirit of Troy. He used many junior high school students from Southern California for the majority of the band. It took about 8 hours of shooting over two days to film the scene. All the musical instruments for the production were specially made for the film by the Olds Instrument Company in Fullerton, CA. The instruments were then refurbished and sold by Olds with no indication they were ever used in the film.