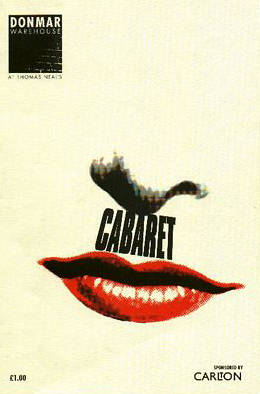 Type de série: Revival
Théâtre: Donmar Warehouse (Londres - Angleterre)
Durée : 3 mois 2 semaines Nombre : 124 représentationsPremière Preview : InconnuPremière : Thursday 09 December 1993Dernière : Saturday 26 March 1994Mise en scène : Sam Mendes • Chorégraphie : Lea Anderson • Producteur : Avec : Jane Horrocks (Sally Bowles), Alan Cumming (MC), Adam Godley (Clifford), Sara Kestelman (Fraulein Schneider), George Raistrick (Herr Schultz), Michael Gardiner (Ernst Ludwig)Commentaires : Mendes' conception was a very different show than either the original production or the rather conventional first revival. The most significant change was the character of the Emcee. The role, as played by Joel Grey, in both prior incarnations, was an asexual, malevolent character in a tuxedo with rouged cheeks. Alan Cumming's portrayal was highly sexualized, wearing suspenders (i.e. braces) around his crotch and red paint on his nipples. The cabaret number "Two Ladies" was staged with the Emcee, a cabaret girl, and a cabaret boy in drag and included a shadow play simulating various sexual positions. The score was entirely re-orchestrated, utilizing synthesizer effects and expanding the stage band, with all the instruments now being played by the cabaret girls and boys. The brutally satiric "Sitting Pretty", with its mocking references to deprivation, despair and hunger, was eliminated entirely, as it had been in the film version, and replaced with "Money". "I Don't Care Much", which was cut from the original production, was reinstated, and "Mein Herr" and "Maybe This Time", written for the film adaptation, were added to the score. Staging details differed as well; instead of "Tomorrow Belongs To Me" being performed by a male choir, the Emcee plays a recording of a boy soprano singing it. Most dramatic of all was in the final scene in which the Emcee removes his outer clothes to reveal a striped suit of the type worn by the internees in concentration camps on which were pinned a yellow badge (identifying a Jewish prisoner) and a pink triangle (denoting a homosexual prisoner). Other changes included added references to Cliff's bisexuality, including a brief scene where he kisses one of the Cabaret boys. 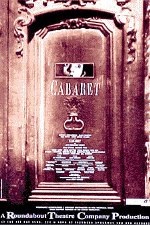