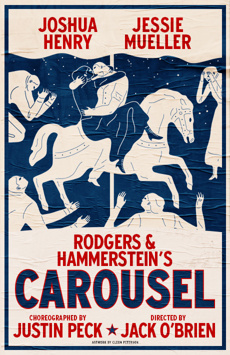 Infused with brand new choreography by New York City Ballet's Justin Peck, the dance sequences range from dreamily graceful to strikingly masculine and have given new life to this timeless classic. In addition, the difficult theme of domestic abuse is sensitively addressed by director Jack O'Brien for the modern day audience and we are reminded how progressive Rodgers & Hammerstein actually were to shine a light on the topic in a Broadway musical way back in 1945.

This production boasts a beautifully crafted scenic design by Santo Loquasto that allows the audience to admire and be inspired to use their own imaginations in equal measures. He paints a picture of a bygone era that has a deliberately hazy atmosphere about it, as if being recalled from a distant memory. It blends with Rodgers & Hammerstein's sumptuous score to great effect and the production delivers an inescapable air of nostalgia as a result.Presse : "Blame it on God, or the fates, or — to use the metaphor of choice here — the stars. But when Billy meets Julie in the heartfelt, half-terrific revival of Rodgers and Hammerstein’s Carousel... you can tell they’ve been felled by a force beyond their comprehension or control." Ben Brantley for New York Times

"Carousel has such a glorious score that the music always shines bright — even in a revival as wobbly as the one now on Broadway at the Imperial Theatre." Joe Dziemianowicz for New York Daily News

"Carousel embraces darkness and brutality while balancing sorrow with jubilation, tragedy with redemption in a show whose emotional complexity is equaled by its ravishing score. What a gift to have it back on Broadway in a magnificently sung revival that breathes pulsing new life into this shimmering masterwork." David Rooney for Hollywood Reporter

"Audiences encountering Joshua Henry's electrifying performance as the charismatic but star-cursed Billy Bigelow will long remember the experience. In this new Broadway revival of Rodgers and Hammerstein's Carousel, Henry shows off the exceptionally beautiful voice of a genuine actor-singer, a voice that while warm and mellow, can also soar with joy and tremble in despair." Marilyn Stasio for Variety