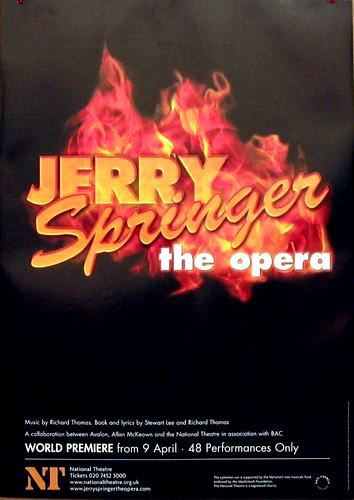 Type de série: Original
Théâtre: National Theatre (Londres - Angleterre) Salle : Lyttelton TheatreDurée : 5 mois Nombre : 87 représentationsPremière Preview : Wednesday 09 April 2003Première : Tuesday 29 April 2003Dernière : Tuesday 30 September 2003Mise en scène : Stewart Lee • Chorégraphie : Jenny Arnold • Producteur : Avec : Michael Brandon (Jerry Springer), Alison Jiear (Chantel/Eve), David Dedella (Warm-up Man/Satan), Wills Morgan (Montel/Jesus), Marcus Cunningham (Chucky/Adam), Valda Aviks (Zandra/Mary), Benjamin Lake (Dwight/God), Aally Bourne (Andrea/Archangel Michael),Commentaires : This was Nicholas Hytner’s first show as the new artistic director of the Royal National Theatre, and it seemed to herald a new era, very different from Trevor Nunn’s series of American musicals’ “golden oldies”.
It had been rewritten and enlarged from earlier “fringe” versions at the Edinburgh Festival and the BAC, and proved to be hugely controversial. The clash of high operatic music and big choral parodies with scatological lyrics about whores, crack, and junkies made some critics compare it to a modern day “Beggar’s Opera”. A nearly naked Jesus admitting to being “a bit gay”, a plump glam-rock God descending on a golden swing singing “It Ain’t Easy Being Me”, and Jesus and Satan performing a baroque duet caused some critics to scream blasphemy. Adam and Eve and the Holy Virgin appearing as guest artists on the Jerry Springer TV chat-show made some critics respond enthusiastically to the satire on the cheap values of modern society. The show won four Olivier Awards including Best Musical.Commentaires longs: In July 2004 David Soul took over the role of Jerry Springer. The show ran a total of 609 performances, closing in February 2005. In January 2005 BBC2 broadcast the show and immediately received 55,000 complaints – the largest number ever recorded for a single TV show. Demonstrations were held outside many BBC offices and the organisation Christian Voice attempted to bring blasphemy charges against the show, but the Magistrates Court refused to issue a summons, a decision later upheld by the High Court. Protests continued at several of its tour venues, and a number of theatres cancelled their plans to stage the tour because of the controversy.
In January 2004 a planned Broadway production was suddenly cancelled, and the show had to wait until 2007, and a concert version, for its American premiere in Las Vegas. It received its first New York staging at Carnegie Hall in 2008 with Harvey Keitel as Jerry Springer. Originally produced as a three-week try out of concert performances at the BAC in February 2002.Presse : NICHOLAS DE JONGH for THE EVENING STANDARD says, "It's vulgar, salacious but such a pleasure."

MICHAEL BILLINGTON for THE GUARDIAN says, "But the supreme merit of Lee's Lyttelton production is that it is superbly sung."

BENEDICT NIGHTINGALE for THE TIMES says, " If ever a show seems destined for cult status, this is it." 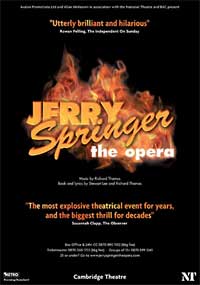 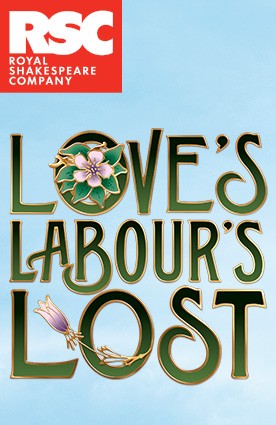 PETER HEPPLE of THE STAGE thinks the same, describing the show as " lacking in wit" and "suffering an almost excruciatingly boring second half." Funnily enough I thought the second half was better than the first!! However, not all critics panned it.

THE DAILY TELEGRAPH says "The piece still strikes me as a breath of fresh air in the West End." 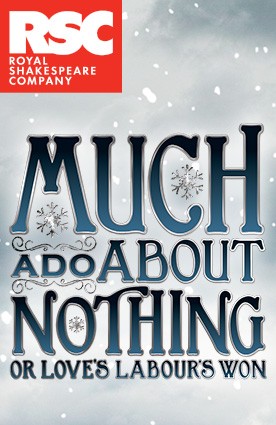 Much ado about nothing (2016-12-Haymarket Theatre-London)

On the Twentieth Century (1996-08-Bridewell Theatre-London)