With great passion and humor, the story is told of Rebecca, a naive Russian immigrant arriving at Ellis Island with her young son, and their struggle to make a life for themselves in the New World. She goes to work in a sweatshop while searching for her husband who has preceded them to America. When they are finally reunited she discovers that his assimilation is not entirely for the best. His desire to change their name and strip away their ethnic culture so as to fit in with his cronies distresses Rebecca, whose gradual enlightenment leads her into union activities against the very men her husband so hopes to impress. Subplots concern an elderly immigrant, his daughter, and their respective romances, one of which ends tragically. This sweeping saga of awakenings and disappointments, of greed and power, of strength and love is as deeply moving and inspirational a musical as you could hope to present.

The Broadway production opened on August 21, 1986 at the Mark Hellinger Theatre with little advance sale and to mostly indifferent reviews, and it closed after only four performances (and 18 previews). Directed by Gene Saks and choreographed by Ron Field, the cast included Teresa Stratas as Rebecca Hershkowitz, Larry Kert as Nathan Hershkowitz, Lonny Price as Ben, Judy Kuhn as Bella Cohen, Dick Latessa as Avram Cohen, Marcia Lewis as Rachel Halpern, and Terrence Mann as Saul, a union organizer. Despite its failure, it garnered a good deal of attention during the awards season.

In 1991, Sony released a studio recording of the score. It featured most of the original cast joined by Julia Migenes replacing Stratas.

Revised versions
In 1991 the creators reunited to present a dramatically rewritten and severely streamlined production at The American Jewish Theatre, New York City, directed by Richard Sabellico. The version had 9 actors playing all of the roles, and a reduced set, with two pushcarts on stage and imaginary windows, with the actors describing the exterior activity. The young immigrant mother has a best friend of almost equal importance, and the story is now told by David, the heroine's young son.

They reworked the show again, staging it first at Florida's Coconut Grove Playhouse (February 1999) and then the Paper Mill Playhouse in New Jersey in November 1999. The revised version cut the cast to 15, from the original Broadway cast of 30. According to Strouse, "We tried to do too much.And now it's tightened, more focused. People got lost in it...The diffuse, scattered story now centers on Rebecca Hershkowitz, a young immigrant mother who escapes to the Lower East Side after a pogrom, and her love affair with Saul, an American labor organizer trying to unionize the sweatshop where she works...The [original] score was influenced by Middle Eastern, Irish, Scottish, English folk, American honky-tonk, obviously jazz and ragtime and klezmer -- even Greek music of that day, and Broadway, too...It is now 'more impressionistic'."

In 2006, Schwartz, Stein and Strouse collaborated on the World AIDS Day Concert version of the musical, celebrating the 20th Anniversary of the show's Broadway opening. The concert was at Times Square's Nokia Theatre and featured Carolee Carmello, Gregg Edelman, Eden Espinosa, Lainie Kazan and Michael Rupert.

Act I
Overture/I Remember
If We Never Meet Again*
Greenhorns
Brand New World
Children of the Wind
Penny a Tune
Easy for You
Hard To Be a Prince
Blame It on the Summer Night
For My Mary
Rags
What's Wrong with That?
On the Fourth Day of July*^
In America*^
Nothing Will Hurt Us Again 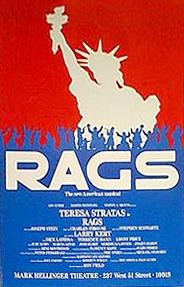 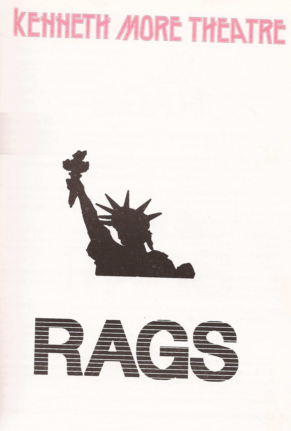 Type de série: Original London
Théâtre: Kenneth More Theatre (Londres - Angleterre) Durée : Nombre : Première Preview : InconnuPremière : mardi 17 novembre 1992Dernière : InconnuMise en scène : Vivian Ellacott • Chorégraphie : Loraine Porter • Avec : Laura Nayman (Rebecca), Adam Perl/Simon Parsons (David), Jason Belne (Nathan Hershkowitz), Philip Halpin (Saul), Joann Kenny (Bella Cohen), James Norris (Avram), Jeremy Lynch (Ben Levitowitz), Simon Curtis, Sally WoodfieldCommentaires : “Rags” opened on Broadway on August 21st 1986 and closed three nights and one matinee later - by any reckoning a major flop. Between the matinee and evening on the last day the cast organised a protest march down Broadway calling for the show to be saved. Seven months after it closed most of the cast were re-assembled to make a recording of music from the show (though the original leading lady, opera singer Teresa Stratas, was not available and was replaced by another opera diva, Julia Migenes.) This CD earned much respect and led to a much smaller-scale (two pianos only) version being re-written for the off-Broadway American Jewish Theatre in the summer of 1991.
This production at the Kenneth More Theatre was the British premiere, and was re-assembled with bits from both previous American versions. It attracted much interest and was attended by several British and European managers with a view to further European productions. Sadly, none materialised.En savoir plus sur cette version

Type de série: Revival
Théâtre: Spitalfields Market Opera (Londres - Angleterre) Durée : Nombre : Première Preview : mardi 18 juin 1996Première : mardi 18 juin 1996Dernière : dimanche 23 juin 1996Mise en scène : Raymond Wright • Barry Hooper • Chorégraphie : Avec : Jill Gardner (Rebecca), Lee Wright/ Daryl Fox (David), Terry Ashwell (Older David), Richard Reece (Nathan Hershkowitz), Simon Rothman (Saul), Gill Hack (Bella Cohen), Denis Steer (Avram), Josh Rochford (Ben Levitowitz),Commentaires : Notes: The original 1986 Broadway production closed after only four performances (and 18 previews) and a dramatically rewritten and streamlined production was created in 1991 and performed at The American Jewish Theatre, New York City. This version had 9 actors playing all of the roles, and a reduced set, with two pushcarts on stage and imaginary windows, with the actors describing the exterior activity. The music was provided by two pianos. The story was now told in retrospect by the Older David, the heroine's young son.
The first UK production, at the Kenneth More Theatre in 1992 was basically the original 1986 version with one or two amendments from the 1991 re-write. This version at the Spitalfields Market Opera was the 1991 version but instead of 9 actors playing many different parts, it was enlarged with a cast of 25 and with an orchestra rather than a piano score. Accordingly, it counted as the fourth different version of this show.En savoir plus sur cette version 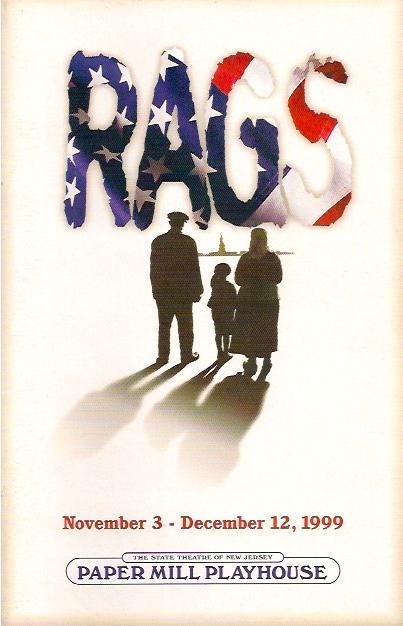 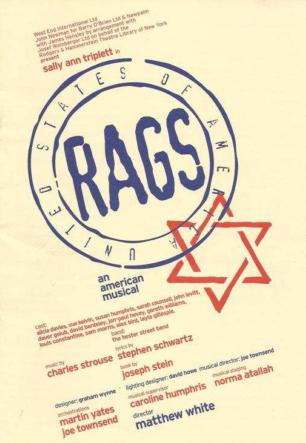