The first memorable post-World War I hit was the Cinderella-like story of a Manhattan shop girl (played by Edith Day) who becomes a high fashion model and wins the love of a Long Island millionaire. The twist is that the millionaire has to win over the girl's impoverished mother who is prejudiced against wealth! Following the Princess Theatre model with believable characters facing realistic problems, Irene set a new long-run record for Broadway by giving audiences sentimental, easy going fun with a fresh "modern" energy.

The original Broadway production, directed by Edward Royce, opened on November 18, 1919 at the Vanderbilt Theatre, where it ran for 675 performances, at the time the record for the longest-running show in Broadway history, one it maintained for nearly two decades, until it was overtaken by Oklahoma! (1943) in 1945.

Based on Montgomery's play Irene O'Dare

Early productions
The original Broadway production, directed by Edward Royce, opened on November 18, 1919 at the Vanderbilt Theatre, where it ran for 675 performances, at the time the record for the longest-running show in Broadway history, one it maintained for nearly two decades. The cast included Edith Day as Irene, Walter Regan as tycoon Donald Marshall, Eva Puck as Helen Cheston, Gladys Miller as Jane Gilmour, and Bobbie Watson as 'Madame Lucy', a flamboyant male dress designer. The show made a star of Day, who departed the cast after five months to recreate her role at London's Empire Theatre, where it ran for 399 performances. Day was replaced in the Broadway production by Helen Shipman.
Irene enjoyed a brief Broadway revival at Jolson's 59th Street Theatre in 1923 with Dale Winter as Irene, Jere Delaney as Madame Lucy, and Walter Regan reprising his role as Donald. Eventually there were seventeen national touring companies, and it was filmed twice, first as a 1926 silent movie with Colleen Moore and again in 1940 with Anna Neagle.
Later productions
In 1971, the revival of the 1925 musical No, No, Nanette with screen legend Ruby Keeler proved to be an enormous hit. Its producer, Harry Rigby, deciding to cash in on the nostalgia craze by reviving another vintage show with another glamorous movie star as its centerpiece, zeroed in on Irene with Debbie Reynolds making her Broadway debut in the title role. Rigby hired librettist Hugh Wheeler to rework the show, which retained only five of the original songs and added tunes written by McCarthy with other composers and original numbers by Charles Gaynor and Otis Clements, with additional material by Wally Harper and Jack Lloyd, written specifically for the revival.
The production was troubled from the start. Billy De Wolfe was forced to withdraw due to illness and was replaced by George S. Irving as Madame Lucy. Reviews in Toronto were mixed, and when Reynolds was stricken with a throat ailment, the producers, rather than cancel the sell-out performances, had her mime her dialogue and songs on stage to director John Gielgud's reading of them from the wings, much to the dismay of angry audiences. Philadelphia critics were brutal, and Gielgud, an odd choice for a lightweight musical comedy, was replaced by Gower Champion, who had helmed a Los Angeles revival of Annie Get Your Gun with Reynolds. Peter Gennaro was hired to restage the musical numbers, and Joseph Stein was brought in to doctor the book, which now had Irene posing as a countess in cahoots with couturier Madame Lucy (the former Liam O'Dougherty) in a scheme to promote his fashions. Postponing the Broadway opening, the producers brought the work-in-progress to Washington, D.C., where it was seen by President Nixon and his family. Their declaration that Irene was a hit made headlines and spurred advance-ticket sales in New York City.
After thirteen previews, the show opened on March 13, 1973 as the inaugural production of the Minskoff Theatre, where it ran for 594 performances. In addition to Reynolds and Irving (who won the Tony Award for his performance), the cast included Patsy Kelly, Monte Markham as Donald, Ruth Warrick, Janie Sell, Meg Bussert, and Reynolds' daughter Carrie Fisher. While reviews were still mixed, the all-important Clive Barnes of the New York Times described it as "raucous, frequently cheerful, and the best 1919 musical in town." On February 7, 1974, Reynold's former MGM co-star, Jane Powell, replaced her. "I'm Always Chasing Rainbows", which had been cut during the pre-Broadway run (although Reynolds' rendition was included in the original cast album), was restored to the score. Reynolds returned to play the final week in New York, then took the show on tour, playing for five months before being replaced again by Powell.
The Broadway revival led to an Australian production with Julie Anthony, who then went on to star in a 1976 London revival that lasted 974 performances.


Original production
Act I
Hobbies – Eleanor Worth and Ensemble
Alice Blue Gown – Irene O'Dare
Castle of Dreams – Eleanor and Ensemble
The Talk of the Town – Madame Lucy, Helen Cheston and Jane Gilmour
To Be Worthy (of You) – Irene and Ensemble

Act II
We're Getting Away With It – Madame Lucy, Donald Marshall, Robert Harrison, Helen and Jane
Irene – Irene and Company
To Love You – J. P. Bowden and Irene
Sky Rocket (Skyrocket) – Irene and Ensemble
The Last Part of Every Party – Helen, Jane and Ensemble
There's Something in the Air – Ensemble


1973 production
Act I
The World Must Be Bigger Than an Avenue – Irene (Lyrics by Jack Lloyd; music by Wally Harper)
The Family Tree – Mrs. Marshall and Debutantes
Alice Blue Gown – Irene
They Go Wild, Simply Wild, Over Me – Lucy and Debutantes (Music by Fred Fisher)
An Irish Girl – Irene and Company (Lyrics by Otis Clements; music by Charles Gaynor)
Stepping on Butterflies – Lucy, Irene, Helen McFudd and Jane Gilmour (Music by Harper)
Mother Angel Darling – Irene and Mrs. O'Dare (Music and lyrics by Gaynor)
The Riviera Rage – Irene and Company (Music by Harper)

Act II
I'm Always Chasing Rainbows – Irene
The Last Part of Every Party – Company
We're Getting Away With It – Lucy, Helen, Jane and Ozzie Babson
Irene – Irene and Company
The Great Lover Tango – Donald Marshall, Helen and Jane (Lyrics by Gaynor; music by Clements)
You Made Me Love You – Irene and Donald (Music by James Monaco)
You Made Me Love You (reprise) – Lucy and Mrs. O'Dare
Finale – Company 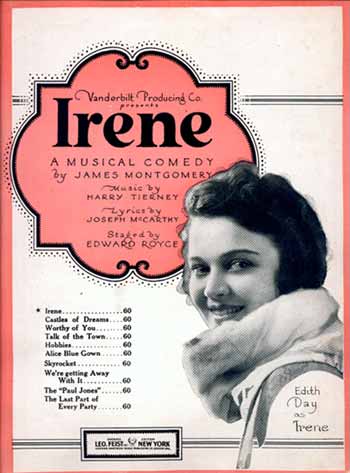 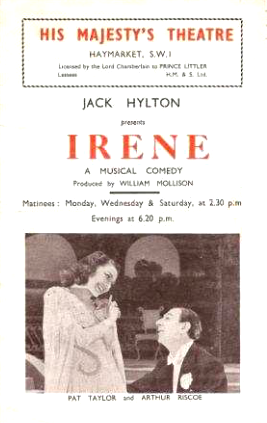 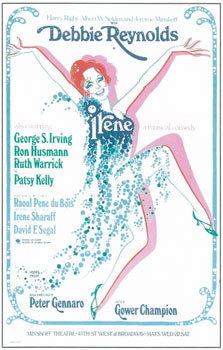 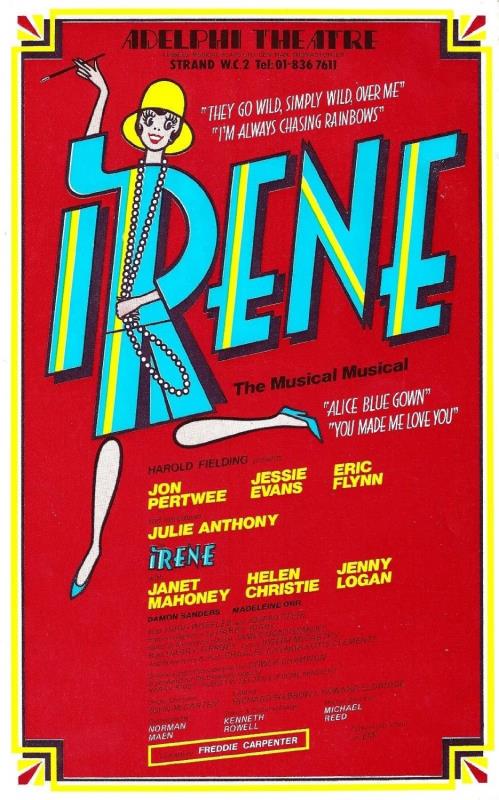