Gilbert returns, in this opera, to satire of snobbery regarding class distinctions and begins his fascination, which will play an even larger part in the next opera, Utopia Limited, with the "stock company act" using the absurd convergence of natural persons and legal entities. Again setting his work comfortably far away from mother England, Gilbert is emboldened to level somewhat harsh criticism on the noble class, and the institution of the monarchy itself.

Two just-married Venetian gondoliers are informed by the Grand Inquisitor that one of them has just become the King of "Barataria", but only their foster mother, presently at large, knows which one. As Barataria needs a king to put down unrest in the country, they travel there to reign jointly, leaving their wives behind in Venice until the old lady can be interviewed. It turns out that the king was wed in infancy to the beautiful daughter of the Spanish Duke of Plaza Toro, and so it seems he is an unintentional bigamist. Of course, the beautiful daughter is in love with a common servant! When the young Spaniard and the two Venetian wives all show up wanting to know which of them is queen, complications arise. No worries: The true identity of the king is revealed, and all is combed out spectacularly well by the end.

Genesis of the opera
The Gondoliers was preceded by the most serious of the Gilbert and Sullivan collaborations, The Yeomen of the Guard. On 9 January 1889, three months into that opera's fourteen-month run, Sullivan informed the librettist that he "wanted to do some dramatic work on a larger musical scale", that he "wished to get rid of the strongly marked rhythm, and rhymed couplets, and have words that would have a chance of developing musical effects." Gilbert counselled strongly that the partnership should continue on its former course: "I have thought carefully over your letter, and while I quite understand and sympathize with your desire to write what, for want of a better term, I suppose we must call 'grand opera,' I cannot believe that it would succeed either at the Savoy or at Carte's new theatre.... Moreover, to speak from my own selfish point of view, such an opera would afford me no chance of doing what I best do — the librettist of a grand opera is always swamped in the composer. Anybody — Hersee, Farnie, Reece — can write a good libretto for such a purpose; personally, I should be lost in it. Again, the success of the Yeoman — which is a step in the direction of serious opera — has not been so convincing as to warrant us in assuming that the public want something more earnest still".
On 12 March, Sullivan responded, "I have lost the liking for writing comic opera, and entertain very grave doubts as to my power of doing it.... You say that in a serious opera, you must more or less sacrifice yourself. I say that this is just what I have been doing in all our joint pieces, and, what is more, must continue to do in comic opera to make it successful."
A series of increasingly acrimonious letters followed over the ensuing weeks, with Sullivan laying down new terms for the collaboration, and Gilbert insisting that he had always bent over backwards to comply with the composer's musical requirements. Gilbert tried to encourage his collaborator: "You say that our operas are Gilbert's pieces with music added by you.... I say that when you deliberately assert that for 12 years you, incomparably the greatest English musician of the age — a man whose genius is a proverb wherever the English tongue is spoken — a man who can deal en prince with operatic managers, singers, music publishers and musical societies — when you, who hold this unparalleled position, deliberately state that you have submitted silently and uncomplainingly for 12 years to be extinguished, ignored, set aside, rebuffed, and generally effaced by your librettist, you grievously reflect, not upon him, but upon yourself and the noble art of which you are so eminent a professor".
Gilbert offered a compromise that Sullivan ultimately accepted — that the composer would write a light opera for the Savoy, and a grand opera (Ivanhoe) for a new theatre that Carte was constructing for that purpose. Sullivan's acceptance came with the proviso that "we are thoroughly agreed upon the subject." Gilbert suggested an opera based on a theatrical company, which Sullivan rejected (though a version of it would be resurrected in 1896 as The Grand Duke), but he accepted an idea "connected with Venice and Venetian life, and this seemed to me to hold out great chances of bright colour and taking music. Can you not develop this with something we can both go into with warmth and enthusiasm and thus give me a subject in which (like the Mikado and Patience) we can both be interested....?"
Gilbert set to work on the new libretto by the early summer of 1889, and by the mid-summer Sullivan had started composing Act I. Gilbert provided Sullivan with alternative lyrics for many passages, allowing the composer to choose which ones he preferred. The long opening number (more than fifteen minutes of continuous music) was the librettist's idea, and it gave Sullivan the opportunity to establish the mood of the work through music. The costumes were designed by Percy Anderson, with choreography by Willie Warde.
They worked all summer and autumn, with a successful opening on 7 December 1889. Press accounts were almost entirely favourable, and the opera enjoyed a run longer than any of their other joint works except for H.M.S. Pinafore, Patience and The Mikado. Sullivan's old collaborator on Cox and Box (and the editor of Punch), F. C. Burnand, wrote, "Magnificento! ... I envy you and W.S.G. being able to place a piece like this on the stage in so complete a fashion."

Reaction of the press and public
Leslie Baily notes, "The bubbling, champagne-quality of the libretto brought out the gayest Sullivan, and the Italian setting called up a warm, southern response from his own ancestry. The Graphic (14 December 1889) pointed out that the music contains not only an English idiom but 'the composer has borrowed from France the stately gavotte, from Spain the Andalusian cachucha, from Italy the saltarello and the tarantella, and from Venice itself the Venetian barcarolle'.
Of Gilbert's contribution, the Illustrated London News reported, "Mr. W. S. Gilbert has returned to the Gilbert of the past, and everyone is delighted. He is himself again. The Gilbert of The Bab Ballads, the Gilbert of whimsical conceit, inoffensive cynicism, subtle satire, and playful paradox; the Gilbert who invented a school of his own, who in it was schoolmaster and pupil, who has never taught anybody but himself, and is never likely to have any imitator—this is the Gilbert the public want to see, and this is the Gilbert who on Saturday night was cheered till the audience was weary of cheering any more."
There was a command performance of The Gondoliers for Queen Victoria and the royal family at Windsor Castle on 6 March 1891, the first performance of a Gilbert and Sullivan opera to be so honoured and the first theatrical entertainment to take place at Windsor since the death of Prince Albert thirty years earlier.

The Carpet Quarrel
With the exception of their first opera, Richard D'Oyly Carte produced every Gilbert and Sullivan opera and had built the Savoy Theatre specifically for productions of their shows. However, on several occasions during the 1880s the relationship among Gilbert, Sullivan and Carte had been strained.
In April 1890, during the run of The Gondoliers, Gilbert discovered that maintenance expenses for the theatre, including a new £500 carpet for the front lobby of the theatre, were being charged to the partnership instead of borne by Carte. Gilbert confronted Carte, but the producer refused to reconsider the accounts. Gilbert stormed out and wrote to Sullivan that "I left him with the remark that it was a mistake to kick down the ladder by which he had risen". Helen D'Oyly Carte wrote that Gilbert had addressed Carte "in a way that I should not have thought you would have used to an offending menial." As scholar Andrew Crowther has explained:
After all, the carpet was only one of a number of disputed items, and the real issue lay not in the mere money value of these things, but in whether Carte could be trusted with the financial affairs of Gilbert and Sullivan. Gilbert contended that Carte had at best made a series of serious blunders in the accounts, and at worst deliberately attempted to swindle the others. It is not easy to settle the rights and wrongs of the issue at this distance, but it does seem fairly clear that there was something very wrong with the accounts at this time. Gilbert wrote to Sullivan on 28 May 1891, a year after the end of the "Quarrel", that Carte had admitted "an unintentional overcharge of nearly £1,000 in the electric lighting accounts alone.
Sullivan supported Carte, and Gilbert felt betrayed. Sullivan felt that Gilbert was questioning his good faith, and in any event, Sullivan had other reasons to stay in Carte's good graces: Carte was building a new theatre, the Royal English Opera House, to produce Sullivan's only grand opera, Ivanhoe. On 5 May 1890, Gilbert had written to Sullivan: "The time for putting an end to our collaboration has at last arrived." Gilbert brought suit, and after The Gondoliers closed in 1891, he withdrew the performance rights to his libretti and vowed to write no more operas for the Savoy.
Gilbert's aggressive, though successful, legal action had embittered Sullivan and Carte. But the partnership had been so profitable that Carte eventually sought to reunite the dramatist and composer. After many failed attempts by Carte and his wife, Gilbert and Sullivan reunited through the efforts of Tom Chappell, who published the sheet music to their operas. In 1893, they produced their penultimate collaboration, Utopia, Limited. But The Gondoliers would prove to be Gilbert and Sullivan's last big hit. Utopia was only a modest success, and their final collaboration, The Grand Duke, in 1896, was a failure. The two would never collaborate again.

Act II
11. "Of happiness the very pith" (Marco, Giuseppe, and Chorus of Men)
12. "Rising early in the morning" (Giuseppe with Chorus)
13. "Take a pair of sparkling eyes" (Marco)
14. "Here we are at the risk of our lives" (Giuseppe, Tessa, Gianetta, Marco, and Chorus)
15. "Dance a cachucha" (Chorus and Dance)
16. "There lived a king" (Don Alhambra with Marco and Giuseppe)
17. "In a contemplative fashion" (Marco, Giuseppe, Gianetta, and Tessa)
18. "With ducal pomp" (Chorus of Men with Duke and Duchess)
19. "On the day when I was wedded" (Duchess)
20. "To help unhappy commoners" (Duke and Duchess)
21. "I am a courtier grave and serious" (Duke, Duchess, Casilda, Marco, and Giuseppe)
22. "Here is a case unprecedented" (Marco, Giuseppe, Casilda, Gianetta, Tessa, and Chorus) 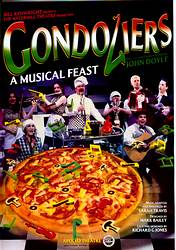 Type de série: Revival
Théâtre: Apollo Theatre (Londres - Angleterre) Durée : 3 semaines Nombre : Première Preview : mercredi 27 juin 2001Première : mardi 03 juillet 2001Dernière : dimanche 29 juillet 2001Mise en scène : John Doyle • Chorégraphie : Avec : Karen Mann, Mike Afford, Elizabeth Marsh, Mark Crossland, Rebecca Arch, Josephine Baird, Eddie Burton, Christopher DickinsCommentaires : Eight actor-musician-singers performed all the roles and played all the music in this completely re-written version, which abandoned nearly all Gilbert’s dialogue and all Sullivan’s original orchestration in favour Mafia and spaghetti gags and boogie-woogie/cool jazz/easy listening . The production had originated at the Watermill, Newbury, where John Doyle had been pioneering a new kind of approach to musicals using actor-musicians accompanying themselves as they perform. This had brought interesting new interpretations to his earlier “Irma la Douce”, “Cabaret” and “Carmen”, but it was generally felt not to have worked with such a period piece as Gilbert & Sullivan’s “The Gondoliers”. It was booked into the Apollo for a limited ten week season.En savoir plus sur cette version 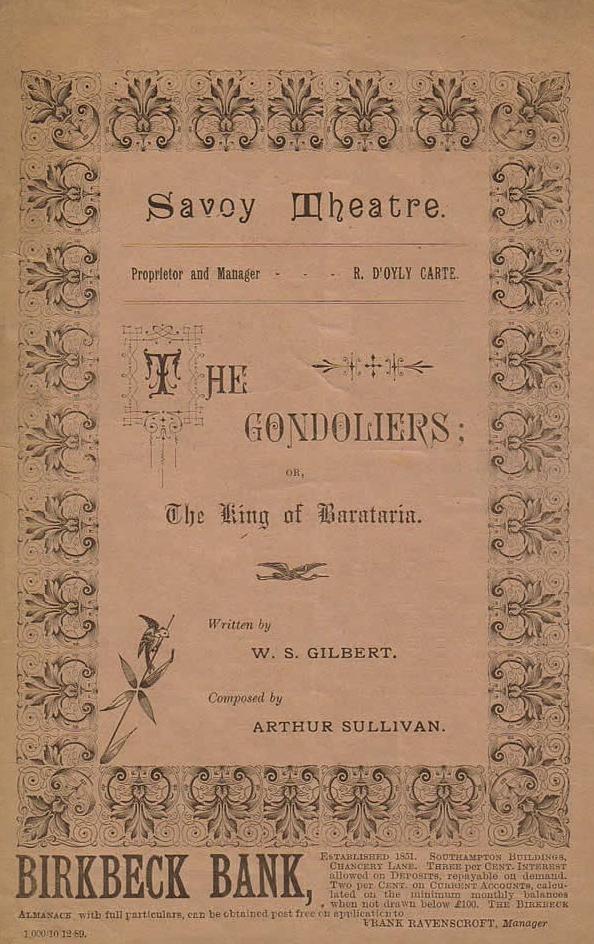