TABOO tells the story of the times, with actors playing out the parts of the bill-topping performers who defined a generation, including STEVE STRANGE from VISAGE, the indefinable phenomenon that was LEIGH BOWERY, the one-man extravaganza MARILYN and club entrepreneur extraordinaire PHILIP SALLON. And then of course, there's BOY GEORGE, travelling from squat to superstardom, from rock to rock bottom. The show interweaves some fantastical facts of the 80s with a classic love story of ambition, passion and betrayal.

The show premiered in London's West End at the newly opened Venue Theatre on January 29, 2002. Comedian/talk show host Rosie O'Donnell was so enamoured with it that she decided to finance a Broadway production. After 16 previews, it opened on November 13, 2003 at the Plymouth Theatre where, hampered by mostly scathing reviews, it closed after 100 performances. The cast, directed by Christopher Renshaw, included Boy George (credited under his real name, George O'Dowd), Euan Morton, Dianne Pilkington, Raúl Esparza, Sarah Uriarte Berry, Jeffrey Carlson, and Brooke Elliott. O'Donnell reportedly lost her entire $10 million investment in the project. O'Donnell said in an interview about Leigh Bowery that she will take Taboo back to Broadway in the future.

2012 Brixton production
In September 2012, Director Christopher Renshaw revived the show in a "site specific" form in Brixton Clubhouse in South London. The production was based on the original show with book by Mark Davies, but included several changes to the original storyline.

Most of the songs stayed the same, but Boy George and Kevan Frost penned a brand new song "No need to work so hard" to replace "Independent woman", and the show's finale was "Come on in from the outside", which had previously been part of the Broadway show.

The following characters were added:
Mick Jagger – A rock star trying to gain access to the club "Taboo" - told by Leigh to "Fuck off, fossil"
Lucien Freud – An artist who painted portraits of Leigh Bowery

Since the plot no longer took the company to India, the role of Guru Dazzle was dropped.
The show was such a success that it was extend to run beyond its initial Christmas deadline. This made the show require a cast change, so the second company included: George - Paul Treacy, Marilyn - Jordan Luke Gage, Billy - Alex Jordan Mills, Derek/Petal - Paul Kevin Taylor, Kim - Devon Elise Johnson, Josie - Julia Worsley, Janey - Sarah Goggin, Male Ensemble - Matthew Gent, all joining existing company members in their previous roles.

The production won the 2013 Whatsonstage.com Awards award for BEST OFF WEST-END PRODUCTION
The second company continued its successful run, and eventually closed on Sunday 31 March 2013 after having done 213 performances.

Original London Production & UK tour
Act I
"Ode To Attention Seekers" – Philip Sallon and Freaks
"Safe In The City" – Billy
"Freak" – Philip Sallon and Freaks
"Stranger In This World" – Boy George
"Genocide Peroxide" – Marilyn
"I'll Have You All" – Leigh Bowery, Billy and Philip Sallon
"Love Is A Question Mark" – Billy and Kim
"Shelter" – Petal and Tarts
"Pretty Lies" – Kim
"Guttersnipe" – George and Marilyn
"Talk Amongst Yourselves" – Josie
"Do You Really Want To Hurt Me" – Boy George
"Touched By The Hand Of Cool" – Leigh Bowery, Billy and Slaves
"Stranger In This World" (Reprise) – Billy

2012 London Revival
"Ode To Attention Seekers" – Philip and Freaks
"Safe In The City" – Billy
"Stranger In This World" – George and Josie
"Dress To Kill" - Freaks
"Fade To Grey" – Steve Strange and Princess Julia
"Genocide Peroxide" – Marilyn
"I'll Have You All" – Leigh
"Love Is A Question Mark" – Billy and Kim
"Shelter" – Petal and Tarts
"Pretty Lies" – Kim and George
"Guttersnipe" – Marilyn, George and Company
"Talk Amongst Yourselves" – Josie
"The Eyes Of Medusa / Do You Really Want To Hurt Me" – George
"Touched By The Hands Of Cool" – Leigh, Sue and Slaves
"Talk Amongst Yourselves" (Reprise) – Derek
"Stranger In This World" (Reprise) – Billy, Marilyn, Steve, George, Leigh and Philip

Act II
"Everything Taboo" – Leigh and Company
"No Need To Work So Hard" – Philip, Kim and Josie
"I See Through You" – Billy
"Petrified" – Philip
"Ich Bin Kunst" – Leigh and Sue
"No Need To Work So Hard / Stranger In This World (Reprise)" – Josie, Kim and Billy
"Il Adore" – Big Sue
"Out Of Fashion" – Steve, George, Marilyn and Billy
"Pie In The Sky" – George, Kim and Billy
"Come On In From the Outside" – Company
Encore: "Karma Chameleon" – Company

Billy – the protagonist, Billy is an aspiring photographer. Frustrated with suburban life in Bromley, he runs to London ('Safe in the city') to make his fortune. There he meets Philip Sallon, who introduces him to Kim and George. He soon falls in love with Kim, and attaches himself to George's rising star. Not based on any one real life person. Played by Luke Evans in the original London production.
Kim – an aspiring punk fashion designer and George's squat-mate. Kim is fiery but insecure, rarely emerging from behind her makeup. She ran away from home at 15, and her mother was too drunk to come looking for her. Not based on any one real life person. Played by Dianne Pilkington in the Original London Cast
George – Artist, poet, singer/songwriter George O'Dowd is shown before and during his initial success, as a supporting role. He takes an immediate shine to Billy. Thrives on attention and shocking others, never appears dressed conventionally. Originally played by Euan Morton, who Boy George said was 'more Boy George than I am'.
Leigh Bowery – flamboyant Australian designer and performance artist. He delights in antagonising Kim, and is constantly surrounded by a gaggle of admirers/slaves. Absorbs Billy into his flock. Played by Boy George himself in both the London and Broadway productions.
Philip Sallon – the second person Billy meets in London, who takes him to Kim and George's squat. Opens the show. Character based on a real person.
Josie James – Billy's mother, who later becomes Kim's best friend and business partner. Not based on any one real life person. Supposedly a part written specially for the performer Lyn Paul to play.
Marilyn – another of the Blitz Kids, Marilyn is first George's rival, then best friend.
Janey – a reporter for the Sun newspaper, who has a connection to George.
Steve Strange – doorman at the 'Blitz' club, and singer with the group Visage who achieved success with 'Fade to Grey'. Good-natured rival of George.
Derek – Billy's father. Violent, drunk and homophobic, he beats up Philip for verbally teasing him. Not based on any one real life person.
Petal – scary cross-dressing drug pusher. Not a convincing woman, just a violent man in a miniskirt. In previews Petal killed Billy near the end of the show. Based on a very real person.
Big Sue – Leigh's main assistant and confidante. Character based on Sue Tilley.
Gary/Guru Dazzle – the bouncer at the 'Blitz' club, who becomes a Krishna devotee. 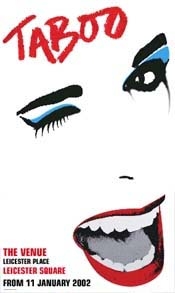 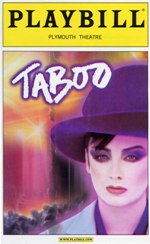