Set in 1890s Paris and traces the life of diminutive Impressionist painter Henri de Toulouse Lautrec whose work captured the decadent and colourful age in which he lived.

Lautrec is Charles Aznavour's first musical. His dramatic 'chanson' style is unioue and instantly recognisable. Bom of Armenian parents in 1924, he has written over 1000 songs and sold more tnan 100 million records in a career spanning six decades. He has appeared in more than 50 films including Don't Shoot the Pianist and A Taxi To Tobruk. He has worked with or nad his songs recorded by many musical 'greats' over the years including Edith Piaf, Ray Charles, Bob Dylan, Fred Astaire, Bing Crosby and Liza Minnelli. He has performed in over 80 countries and is still doing so undertaking a tour of Belgium this autumn followed by a return to the Palais de Congres in Paris for a two month concert season. His Number One hit song 'She', sung by Elvis Costello, was recently featured in the film Notting Hill. 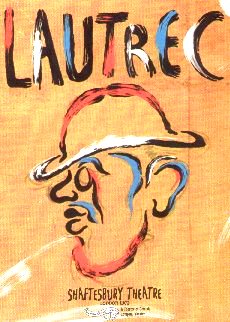 Type de série: Original
Théâtre: Shaftesbury Theatre (Londres - Angleterre)
Durée : 2 mois 1 semaine Nombre : Première Preview : lundi 27 mars 2000Première : jeudi 06 avril 2000Dernière : samedi 17 juin 2000Mise en scène : Rob Bettinson • Chorégraphie : Queeny Sachs • Producteur : Avec : Sevan Stephan (Henri Toulouse-Lautrec), Hannah Waddingham (Suzanne Valadon), Jill Martin (Adele), Nigel Williams (Alphonse), Martin Fisher (Gabriel), Peter Gallagher (Aristide Bruant), Sadie Nine (La Goulue), David Langham, Alexander Delamere, Wendy Lee Taylor, Richard Gauntlett, Roz McCutcheon, Jon Emmanuel, Nic GreenshieldsCommentaires : Praised for its lavish scenery and costumes, the rest of the show was heavily criticised with phrases like “a poorly structured and under-written book”, “dreary music and trite lyrics”. It ran for just ten weeks.Presse : "One way to pass the time during Charles Aznavour's mawkish study of Toulouse-Lautrec is to try to catch echoes of other musicals. The ghosts of Les Mis. Phantom and Fiddler on the Roof all flash by at various points. But by the time the final glass of absinthe has been sunk, you simply feel sorry for the brave-hearted cast - led by Sevan Stephan in the title role - who do their best to breathe life into a collection of resolutely wooden songs. Robert Jones's set gives the evening a touch of class... Hannah Waddingham makes a feisty romantic partner, but her part remains as flimsy as a second-hand camisole. All in all, not so much Folies Bergeres as a straightforward folly." The Sunday Times

"The story of Lautrec boasts all the poster-paint simplicity of a period lithograph. Played with verve and swagger by Sevan Stephan, the tiny, frail maestro pursues his art and his tarts in Montmartre while his creepy, in-bred clan plot to drag him back to the old chateau. Along the way he falls in love with the would-be painter Suzanne Valadon - the promising Hannah Waddingham - as her ambitions drive her from the streets to the studio... And, behind the velvet and venery, Aznavour's ever-so-digestible score (with smart English lyrics by Dee Shipman) slots smoothly into every standard groove of its genre, from the impassioned 'I-just-want-to-be-ME' solo to bring-the-house-down drinking-songs... Sevan Stephan's agile bundle of laughs and lubricity is always entertaining, and Hannah Waddingham - especially when she really lets rip - gives a thrilling taster of what she might do with more strenuous material. In fact, amid all the salacious bonhomie, it's more than feasible to describe Lautrec as a good time had by all - just like so many of its characters, of course." The Independent on Sunday