Compared to Oliver! This show is now virtually unknown but was originally described by one critic ‘a breathtaking theatrical adventure which restores spectacle to British musicals on a huge imaginative scale’.

The story centers on the relationship between a Jewish family, the Blitzteins, and a Cockney family, the Lockes, in 1940s London as the city takes a pounding from Hitler’s bombs. At first Mrs. Blitztein and Alfie Locke work at adjacent food stalls – and can’t stand each other. But when their children fall in love with each other and Hitler’s bombing intensifies, Mrs. Blitztein and Alfie are able to bury the hatchet and become friends.

Blitz! opened in London 8 May 1962 at the Adelphi Theatre, while Bart's enormous West End success Oliver! was still running at the New Theatre; at that time Oliver! had not yet been produced on Broadway. Blitz ran for 568 performances. It never ran on Broadway: between its scale and the fact that New Yorkers could hardly be expected to share Londoners' nostalgia for the period, it proved "unexportable". Bart wrote the music and lyrics, and had directed the original London production himself; Joan Maitland contributed to the libretto. Sean Kenny designed the elaborate sets, which included representations of Victoria Station, Petticoat Lane, and the Bank underground station, not to mention London on fire during an air raid. Four revolving house units and an enormous, mobile overhead bridge carried on two shifting towers made it, at the time, the most expensive West End musical ever produced. Noël Coward called it "twice as loud and twice as long as the real thing."

The song "The Day After Tomorrow" was specially written by Bart for Vera Lynn. Lynn had been a star at the time of the German bombing attacks; in the play, the characters listen to Lynn sing it on the radio while they shelter underground. Lynn did not actually appear onstage during the production, but she recorded the song for it, and the production used her recording on the "radio". The play also makes use of a recording of a Winston Churchill radio speech.

The role of Mrs. Blitztein was played by Amelia Bayntun in the original cast; it was her only role in a stage musical. The cast included a large number of children. There is a scene in which the children are to be evacuated from London; they cheerfully sing "We’re Going To The Country", while their mothers try to put on a cheerful face. The children's chorus "Mums and Dads" was a "showstopper"[6] that drew much radio play.

The musical was never seen for many years, largely because the original scores went missing during Bart's turbulent years. It was reassembled in Australia by 19 year old Andrew Jarrett, a Bart devotee, with orchestrations by Kevin Hocking, Jack Westmore and Stephen Smith. So impressed was Bart, that he came out of obscurity and travelled to Australia for Jarrett's triumphant production in 1985. The Royal Shakespeare Company's intended 1990 revival (for the fiftieth anniversary of the Blitz) never happened, although the National Youth Theatre did revive it in London's West End at the Playhouse Theatre in September 1990 with Jarrett imported as Music Director. This production was directed by Edward Wilson and choreographed by David Toguri, with the role of Mrs. Blitzstein played by Jessica Stephenson (now Hynes), (now an established UK screen actor). According to the review in The Guardian "Edward Wilson's production for the NYT is necessarily more modest and contains some beautiful, slate-grey designs from Brian Lee: his backdrop of a soaring-arched Victorian railway terminus is stunning. David Toguri's musical staging shows his customary flair, camouflaging the cast's vocal weaknesses by bringing out their physical athleticism. And Jessica Stevenson as the mob-capped Mrs Blitzstein admirably conveys truculent working-class defiance." Benedict Nightingale wrote in his review: "But the strongest performance comes from Jessica Stevenson as a Jewish matriarch able to sing a silly song about baking cakes being the answer to all ills, yet remain quietly dignified throughout. Here is an apprentice actress to encourage."[8] This production became the basis for a touring Northern Stage Company revival starring Diane Langton as Mrs. Blitztein.

Mrs Blitztien - Typical Jewish matriarch and self confessed 'Queen of Petticoat Lane'. Mrs Blitztien has spent her entire life trying to bring up her seven children in the proper Jewish way and very disappointed at the fact that they have all in their own way rebelled. Her rival on the street is fruit & veg man Alf Locke with whom she has an explosive relationship and neither can ever resist making snide comments to the other when they get the chance. Her poor relationship with Alf clouds her judgement of Georgie as a potential husband for Carol but she soon realises she was wrong about him.
Carol Blitztien - Mrs Blitztien's youngest daughter. She clearly loves her mother very much but is not willing to let her run her life. She is in a sort of relationship with a Jewish boy early in the show but she breaks it off when she falls in love with Georgie Locke. Carol is blinded the night before Georgie goes off to fight whilst looking for her brother during an air raid. When Georgie doesn't tell her he's coming home, she worries he has gone off her but he ends up proposing and she marries him. It is implied at the end that her sight is coming back.
Harry Blitztien - Harry is the eldest son of Mrs Blitztien. He like all his siblings adores his mum but also finds her a pain and is not above rebellion even to the point of having Georgie Locke as his best friend. Harry is a typical Jack the Lad type and a huge hit with ladies, even the married ones. Harry's philandering ways disappoint his mother enough but he makes it worse when he deserts the army. He spends six months on the run working the black market but soon tires of it and wishes that like Georgie he had faced his duty. He ends up turning himself in.
Alf Locke - Alf owns the fruit & veg stall at the market and is Mrs Blitztien's nemesis. A World War I veteran he is now Chief ARP Warden and along with his mate Ernie Nearmiss he takes the job very seriously. He is father to Georgie and Franie who he tries to keep on a tight leash with little success. Alf has never been happy about Georgie's friendship with Harry and is less happy about his relationship with Carol. He reluctantly attends his son's wedding and resigns himself to the fact that Georgie has married a Blitztien but unlike Mrs Blitztien he is never entirely happy about it.
Georgie Locke - Eldest child and only son of Alf. Georgie is very different to his father, quiet and shy around people especially women. He joined the army at the start of the war and during basic training he made Lance Corporal. On returning home he found Carol Blitztien had grown from a girl into a beautiful young woman and he instantly fell for her and spent his weeks leave courting her. Georgie left for the front unaware that Carol had been blinded and was informed by his father in a letter. Georgie is injured in battle and loses one of his kidneys which means he is demobbed and sent home. Feeling a complete failure as a son, soldier and boyfriend he can't bring himself to face Carol and begins to think that Harry had the right idea running away. Mrs Blitztien tells him he's not a failure and she's proud of him for facing his duty unlike Harry. Georgie proposes to Carol and they marry.
Ernie Nearmiss - Alf's best mate and fellow Warden. He takes the job very seriously and he has a high level of self-importance as result. If he hears about any trouble nearby that requires ARP attention he will head off in a flash to investigate and take charge.
Elsie - Elsie is Mrs Blitztien's lodger and Harry's on/off girlfriend. Like Harry she is very popular with the opposite sex and has clearly had a string of boyfriends. When the Blackwells are killed in an air raid, Elsie seems to take on guardianship of their son Tommy.

There were rumors of a Broadway production starring Ethel Merman, Martha Raye or Molly Picon as Mrs. Blitzstein. The expensive production and British roots were obstacles that could not be overcome. 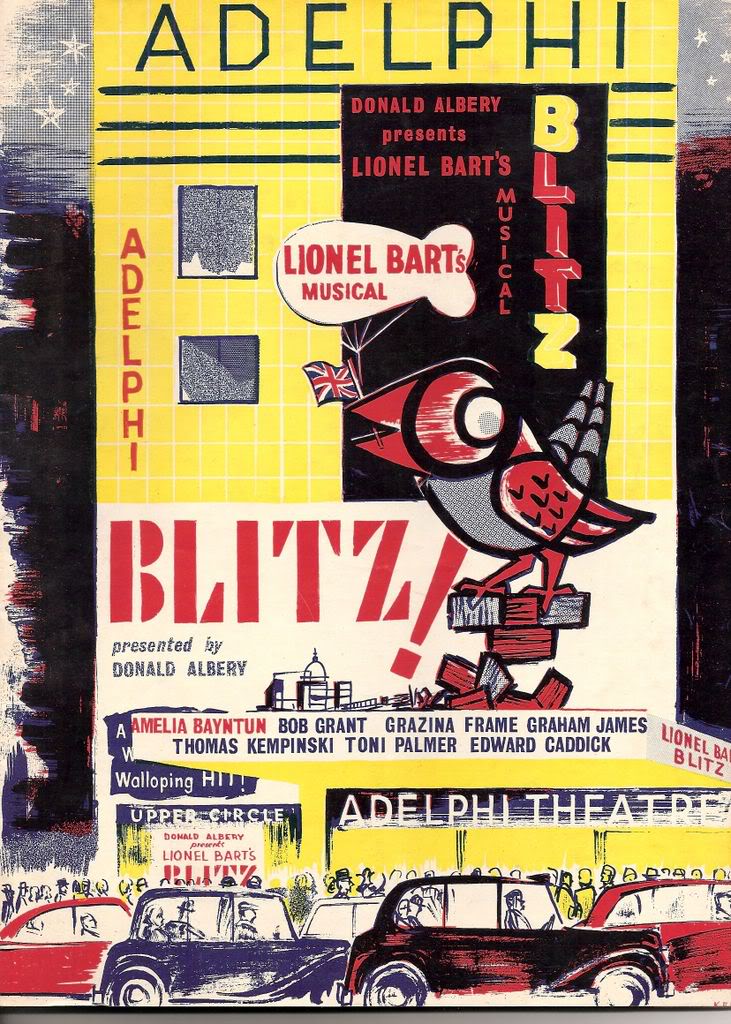