Lock up your kids, folks, he’s back! Beetlejuice is ruder, raunchier and frankly, more repellant than ever in this original musical based on Tim Burton’s wonderfully demented film. Beetlejuice tells the story of Lydia Deetz, a strange and unusual teenager obsessed with the whole “being dead thing.” Lucky for Lydia, her new house is haunted by a recently deceased couple and a degenerate demon who happens to have a thing for stripes. When Lydia calls on this ghost-with-the-most to scare away her insufferable parents, Beetlejuice comes up with the perfect plan, which involves exorcism, arranged marriages and an adorable girl scout who gets scared out of her wits. Plus singing and dancing, of course.

It is based on the 1988 film of the same name, directed by Tim Burton with story by Michael McDowell and Larry Wilson

In 2016 a musical adaptation of the 1988 film Beetlejuice (directed by Tim Burton and starring Geena Davis as Barbara Maitland, Alec Baldwin as Adam Maitland, Winona Ryder as Lydia Deetz and Michael Keaton as Beetlejuice) was reported to be in the works, directed by Alex Timbers and produced by Warner Brothers, following a reading with Christopher Fitzgerald in the title role. In March 2017 it was reported that Australian musical comedian Eddie Perfect would be writing the music and lyrics and Scott Brown and Anthony King would be writing the book of the musical, and that another reading would take place in May, featuring Kris Kukul as musical director. The musical has had three readings and two laboratory workshops with Alex Brightman in the title role, Sophia Anne Caruso as Lydia Deetz, Kerry Butler and Danny Pudi as Barbara and Adam Maitland.

On August 16, it was announced that Alex Brightman would star as the title role alongside Sophia Anne Caruso as Lydia Deetz, after playing the roles in the workshops.

On September 6, it was announced that following its Washington D.C. tryout, the musical will open during the 2018-19 season on Broadway at the Winter Garden Theatre with an official opening night on April 25, 2019. Exact start dates in March and casting are to be confirmed. 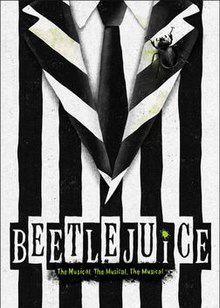