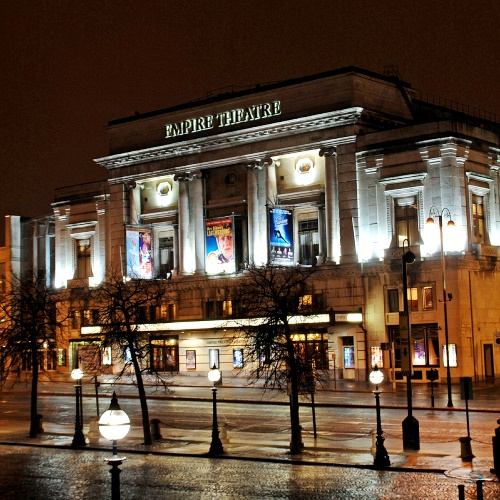 In October 1866 a new theatre, named The Prince of Wales Theatre and Opera House opened in Liverpool, on Lime Street. About three quarters the size of the theatre that stands today, it was lit by gas light and all the stage machinery was controlled by steam power. The very first production was the opera Faust, performed by an Italian company. Within a year the theatre had been renamed and became the Alexandra Theatre and Opera House, probably because the Prince of Wales married Princess Alexandra and it was named after her. The theatre staged a variety of shows, mainly focussing on opera but also featuring plays, ballet and musical shows.

A number of notable names travelled to Liverpool during this time to appear at the theatre, including Ellen Terry and Henry Irving, Marie Lloyd, Harry Lauder and, more notoriously, Sarah Bernhardt. Towards the end of the century the theatre began to struggle financially, operas were very expensive to produce and didn’t bring in the financial returns necessary. At one point in an attempt to prevent the bailiffs entering the theatre, management and staff stood together with fire hoses to fight them off, however they could not prevent the fact that bankruptcy was inevitable.

In 1895 a company called Moss Empires bought the theatre for £30,000. Moss Empires were a large theatrical company that eventually went on to become the Stoll Moss Group, and owned many ‘Empire’ theatres around the country. They changed the name of the theatre again, it now became the Empire Theatre, our name for just over one hundred years. They had the theatre refurbished by famous theatre architect Frank Matcham, and then continued to run the theatre along the same lines, opening with the pantomime Cinderella and also producing a number of variety shows.

Early in the 1900s electricity was put into the theatre. Most people didn’t have electricity in their homes at this time, so to come to the theatre and see it lit with electric light was quite spectacular. It also made a big difference from a safety point of view. The theatre stayed open throughout the First World War, with a seat in the ‘gods’ costing a tanner. During the 1920s Moss Empires decided the theatre wasn’t big enough or grand enough and so they pulled it down. The Empire Theatre that stands today was opened in March 1925, entirely rebuilt and enlarged to become the most up to date theatre in the provinces. It had the widest auditorium in Europe, and with a seating capacity of 2,381 is one of the largest two tier theatres in the country.

The theatre was based on an American design, possibly a theatre in Chicago or New York. During the 1920s the Americans had a law called Prohibition, which meant no alcohol could be consumed, either in public or private. So when the new Empire Theatre was opened they hadn’t put any bars in. We didn’t have the law of Prohibition in England and the people of Liverpool wanted a drink when they came to the theatre, so very quickly bars were put in both upstairs in the circle and downstairs below the stalls.

The first production in the new theatre was a revue called Better Days, and this heralded the new fashion in theatre during the 20s and 30s, when shows were a collection of music, dance and comedy but with little or no story to hold them together. The Empire welcomed stars such as Ivor Novello and Dame Sybil Thorndike during this time. At the beginning of the Second World War the government decided that all theatres and cinemas should be closed down. They thought it was too dangerous for a large number of people to be collected together under the threat of air raids.

It was soon reversed, however, when they realised that people needed entertaining more than ever during such difficult times. The Empire Theatre went from strength to strength staging a range of shows to keep people entertained with favourites such as Arthur Askey and Tommy Trinder, whose brother was the stage manager. The theatre was damaged by an incendiary bomb, which came through the roof and set one of the boxes on fire, but that was fortunate considering the heavy raids on Liverpool and the damage suffered by the museum and art gallery across the road. Audiences would stay in the theatre despite raids over Birkenhead and Liverpool, tempted by the shows – and the chance of a free pint of beer at the end of the night!

Julie Andrews, Laurel and Hardy and Frankie Vaughn all flocked to the theatre in the 1950s, closely followed by Frank Sinatra and Judy Garland in the 60s. Once again the style of theatre had changed and the Empire played host to concerts, with a big star at the top of the bill and aspiring stars working their way up. In 1965 the Beatles returned to Liverpool to perform at the Empire and the theatre was packed, with girls even jammed into the royal boxes, which aren’t normally sold as seats. You couldn’t hear a note they sang or played because of the screams of the audience, overwhelmed by being in the presence of the Fab Four.

The 1970s brought a down turn in theatres’ fortunes. Audiences were being attracted away by other forms of entertainment and theatre was unable to offer anything new or exciting enough to hold them. The Empire continued to offer a range of different shows, including a grand family pantomime every Christmas and it was decided to use the theatre space for meetings and other events during the day to bring in extra revenue.

By 1979, however, Moss Empires could carry on no longer and decided to sell the theatre. No one could be found to buy the Empire although a number of developers were interested in the land it is built on. Forefront to these was one who wanted to tear the theatre down and replace it with a multi storey car park, as parking has always been in short supply next to Lime Street Station. Luckily Merseyside County Council didn’t agree and they got together with the Arts Council for England to save the theatre. A rescue package was organised, debts discharged and the theatre handed over to the council. A Board of Trustees was formed and they employed a theatre manager. The Council were keen to save the theatre but this endeavour cost them £600,000 per year, which was a lot of money in the early 1980s.

Around this time there was a major resurgence in theatre, mainly due to the arrival of a number of Andrew Lloyd Webber and Cameron Mackintosh musicals in the West End. Suddenly musicals were the thing to see, and were popular with everyone. Gradually they began to tour to the provinces and this changed everything for theatre in general.

In 1986 the Government decided to restructure local councils and Merseyside County Council was one of the ones that ceased to exist. So once again the future of the Empire Theatre was uncertain. Liverpool City Council didn’t want the financial responsibility of the theatre, so they handed it over on a long lease to the Board of Trustees, who then set about finding a company to manage the theatre.

They eventually chose Apollo Leisure (UK) Ltd, a family run entertainment and leisure company, begun in 1977. Apollo Leisure was responsible for about twenty theatres and also cinemas, bingo halls and hotels. They came in to run the theatre as a business to make a profit, and from that time we no longer receive any government or local council funding for the day to day running of the theatre.

The Board of Trustees and Apollo did feel that extensive work needed to be done to the theatre. The canopy at the front of the theatre was propped up to prevent it falling off, the theatre in general was looking shabby and backstage needed serious improvement to bring it up to date with all the recent changes in theatre design and technology. After long discussions and a variety of different plans were put forward, a refurbishment programme was decided upon. Now the Trust and the theatre had to finance their plans. We were lucky enough to receive a grant of 7.5 million pounds from the Arts Council for England Lottery fund, made up to just over 11 million by donations from the European Regional Development Fund, the Foundation for Sport and the Arts, the council, Apollo and a number of other funding bodies.

In 1998 the theatre closed for five months for phase one of a major refurbishment. The auditorium was redecorated, seats reupholstered and the front of house areas improved to make the facilities better for our audiences, including increasing the ladies toilets by 180%. A number of significant backstage changes were also made, including a new flying system, dock doors and lift, orchestra pit lift and all dressing rooms provided with showers, toilets and mirrors with lights round. The most significant change was the extension of the stage by 20 feet at the back, this means there is no longer a touring show in this country that the theatre cannot fit on its stage, whereas before shows such as Les Miserables, The Phantom of the Opera, Jesus Christ Superstar, Doctor Dolittle and Sunset Boulevard would not have fitted onto the stage.

This is also the reason why the Empire was chosen by Disney to launch their first ever theatrical tour of the UK with Beauty and the Beast. It closed for six weeks for them to build the sets and rehearse and then had a hugely successful four week run of the show, selling more tickets than any previous show.

In 2001 Apollo Leisure became part of a large American company called Clear Channel Entertainment before the theatrical division of CCE became known as Live Nation. Recently the Ambassador Theatre Group completed the acquisition of all of Live Nation’s UK theatres, including the Liverpool Empire. ATG is also one of the country’s foremost theatre producers and has been behind some of the most successful and innovative productions in Britain and internationally.

All the redevelopment work has now finished and there now stands a new building next to the theatre on the corner of Lime Street and London Road, replacing the old Legs of Mann pub. The new building, attached to the theatre by a glass atrium contains the box office, bar and three floors of multi-function space that can be used for events, parties, conferences and performances. The new building also contains a lift, providing access to the circle on two levels and enabling us to increase the number of wheelchair spaces we have in the auditorium.