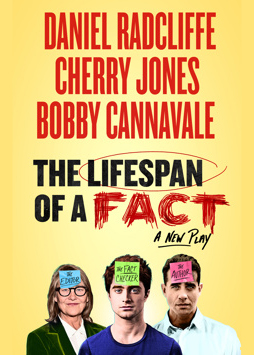 This production has an air of slickness about it - from Lucy Mackinnon's ultra-modern timeline and email projections to Mimi Lien's seamlessly efficient sliding sets - and director Leigh Silverman's execution is always precise, in terms of the pacing and use of space. It is a rare occasion that a new play stages its world premiere directly on Broadway and on this occasion, no doubt aided by the star quality and appeal of its cast, it has been a resounding success. Let's hope that the lifespan of this play reaches past Studio 54 and out into the rest of the theatrical world.Presse : "With its cast, its dead-on timing, its perfect set by Mimi Lien and sound design by Palmer Hefferan, it would probably nail its laughs even without the dialogue. It’s what you call a good time. Of course, I can’t prove that." Jesse Green for New York Times

"Like most issue plays these days, this one ends on a note of ambiguity, but I suspect that most people in the audience will have made up their minds by then. It may be a problem when you can’t see the forest for the trees, but if the trees aren’t real, can you even call it a forest?" Adam Feldman for Time Out New York

"Written by Jeremy Kareken, David Murrell, and Gordon Farrell, The Lifespan of a Fact is a riveting 90 minutes. Leigh Silverman directs with a sharp eye, encouraging her excellent actors to flesh out the roles with natural humor and nuance." Roma Torre for NY1

"At the first press performance of the crackerjack new Broadway play The Lifespan of a Fact, the laughs seemed especially explosive from copy editors in the audience, along with every writer who has ever dealt with that endangered species. But the spry humor, rippling tension and provocative reflections of this ingenious adaptation of the sui generis book of the same name will by no means speak exclusively to those of us who make our livings as members of the fourth estate." David Rooney for Hollywood Reporter

"Harry Potter had no sense of humor whatsoever, but Daniel Radcliffe proves to be a master of comedy in The Lifespan of a Fact, the brainy Broadway play that Jeremy Kareken, David Murrell and Gordon Farrell adapted from a magazine article — better described, perhaps, as that classier literary form, the Essay — and a subsequent book by John D’Agata and Jim Fingal." Marilyn Stasio for Variety