«Children of a Lesser God» 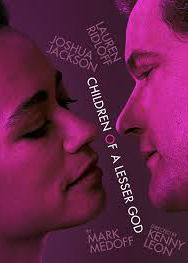 For hearing members of the audience, the play is an intriguing insight into the non-hearing world, especially in its consideration of how members of the deaf community relate to each other and if they desire to be a part of the hearing world or shut themselves away from it. For non-hearing members of the audience, Children of a Lesser God is a rare opportunity of total inclusion, where their trials, tribulations and triumphs stand rightfully in the limelight.Presse : "The pungency of sign language is not the subject of Mark Medoff’s Children of a Lesser God, which opened on Wednesday at Studio 54 in a mixed bag of a Broadway revival directed by Kenny Leon. But it’s a wonderful bonus to the play’s fierce rivalry between those who promote spoken English as the highest attainable form of communication and those who are staunch partisans of silence." Jesse Green for New York Times

"In the role for which Phyllis Frelich won a Tony and Marlee Matlin an Oscar, Ridloff, a wonderfully expressive actress, provides the show with its vibrant beating heart. She connects with and conveys Sarah’s anger, desire, vulnerability and independent spirit — and leaves a lasting impression." Joe Dziemianowicz for New York Daily News

"Children of a Lesser God is ultimately about how hard it is to understand Sarah’s inner life, but Ridloff is the only thing in the play that seems to have any inner life at all. She is a wonder; the rest is mostly unspeakable." Adam Feldman for Time Out New York

"If there's a more indigestible lump of bouncy 1970s pop schmaltz than Paul McCartney's "Silly Love Songs," right now it escapes me. It's one of a handful of intrusive music choices that director Kenny Leon makes in the dreary Broadway revival of Children of a Lesser God, a once-groundbreaking 1979 play by Mark Medoff that today needs no help showing its age." David Rooney for Hollywood Reporter

"Memory can be deceptive, but it does seem as if this existential conflict between the speaking world and the silent world was portrayed more forcefully in the original production. In this revival, directed by Kenny Leon, the argument doesn’t really surface until the end of the play. Lacking that solid thematic foundation, Medoff’s play deflates into just another romantic drama about mismatched lovers struggling to surmount their differences and live happily ever after." Marilyn Stasio for Variety