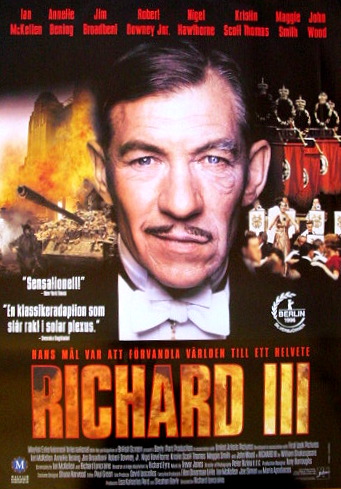 Type de série: Revival
Théâtre: *** Film (*** - ***) Durée : Nombre : Première Preview : vendredi 29 décembre 1995Première : vendredi 29 décembre 1995Dernière : vendredi 29 décembre 1995Mise en scène : Richard Loncraine • Chorégraphie : Avec : Ian McKellen (Richard, Duke of Gloucester, puis King Richard III), Annette Bening (Queen Elizabeth), Jim Broadbent (the Duke of Buckingham), Robert Downey, Jr. (Rivers), Kristin Scott Thomas (Lady Anne Neville), Maggie Smith (the Duchess of York), John Wood (King Edward IV), Nigel Hawthorne (George, Duke of Clarence), Adrian Dunbar (Sir James Tyrrel), Edward Hardwicke (Lord Stanley), Tim McInnerny (Sir William Catesby), Jim Carter (Lord Hastings)
Dominic West (Henry, Earl of Richmond (le futur King Henry VII)), Trés Hanley (Lord Rivers' mistress), Roger Hammond (Archbishop Thomas), Donald Sumpter (Robert Brackenbury), Bill Paterson (Richard Ratcliffe), Kate Steavenson-Payne (Princess Elizabeth), Christopher Bowen (Edward of Lancaster, Prince of Wales), Matthew Groom (Prince Richard of York), Marco Williamson (Edward of York, Prince of Wales), Edward Jewesbury (King Henry VI), Michael Elphick (Second murderer), Stacey Kent (Singer at the celebratory ball)Commentaires : The film's concept was based on a stage production directed by Richard Eyre for the Royal National Theatre, which also starred McKellen. The production was adapted for the screen by McKellen and directed by Richard Loncraine.
The film is notable for its unconventional use of famous British landmarks, often using special effects to move them to new locations. The transformed landmarks used include the following:
St Pancras railway station is relocated to Westminster and becomes King Edward's seat of government.
Battersea Power Station is relocated to the coast of Kent and is portrayed as a bombed-out military base.
Bankside Power Station, rather than the actual Tower of London, is the prison where Clarence is imprisoned. At the time of filming, the station was partially derelict, long before its current partial use as Tate Modern.
Brighton Pavilion is relocated to a coastal clifftop as King Edward's country retreat.
Senate House of the University of London is Richard's seat of government and is used for interior and exterior scenes.[2] The famous art deco facade and clock of Shell Mex House is also featured in exterior shots.
The visually rich production features various symbols, uniforms, weapons, and vehicles that draw openly from the aesthetic of the Third Reich as depicted in Nazi propaganda (especially Triumph of the Will) and war films. At the same time, obvious care is put into diluting and mixing the Nazi references with recognizable British and American uniform styles, props, and visual motifs. The resulting military uniforms, for instance, range from completely Allied in cases of positive characters to almost completely SS in the case of Richard's entourage. Another example of this balanced approach to production design is the choice of tanks for battle scenes between Richmond's and Richard's armies: both use Soviet tanks (T-55s and T-34s respectively), mixed with German, American, and British World War II-era vehicles. To convey the out-of-place nature of the common-born Queen Elizabeth, she is reconfigured as an American socialite similar to Wallis Simpson, and she and her brother are treated with marked disapproval by members of the Court.
Perhaps the play's most famous line—"A horse! A horse! My kingdom for a horse!"—was re-contextualized by the more recent setting; during the climactic battle, Richard's jeep becomes stuck, hung up on a pile of debris, and his lament is cast as a plea for a mode of transport with legs rather than wheels.
The film enlarges the role of the Duchess of York considerably by combining her character with that of Queen Margaret, as compared with Laurence Olivier's 1955 film version of the play, in which the Duchess hardly appeared at all and Queen Margaret was completely eliminated. The roles of Rivers, Grey, Vaughan, and Dorset are combined into Rivers. The death scenes are shown rather than implied as in the play, and changed to suit the time (Hastings is hanged rather than beheaded) and historical accuracy (Clarence dies by having his throat cut in a bathtub, rather than being drowned in a wine barrel). Lord Rivers—who usually dies offstage (or, in the case of Olivier's film, offscreen)—is impaled by the device of a sharp spike spurting up from the bottom of his mattress while he lies in bed during sex with a woman in a hotel room. Each character's pre-death monologue is also removed, except that of Clarence and Buckingham.