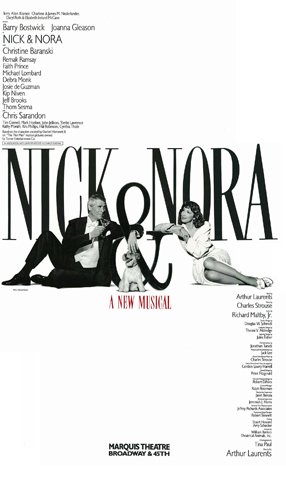 Type de série: Original
Théâtre: Marquis Theatre (Broadway - Etats-Unis) Durée : 1 semaine Nombre : 71 previews - 9 représentationsPremière Preview : mardi 08 octobre 1991Première : dimanche 08 décembre 1991Dernière : dimanche 15 décembre 1991Mise en scène : Arthur Laurents • Chorégraphie : Tina Paul • Presse : In his review in Time, William A. Henry III called the production "a crashing bore - cranky and arbitrary as a love story, tedious and pointless as a murder mystery, ham-handed as comedy, clubfooted as dance, at best wanly pleasant as music." He added, "A few scenes work, some quite well. The final 10 minutes achieve a truth and simplicity underscoring the barren brittleness of what has gone before. But ultimately the show fails at its most basic task: making audiences care about, or for that matter simply believe in, the characters."

Frank Rich in his review in the New York Times wrote:"...this musical will no doubt always be remembered, and not without fondness, for its troubled preview period, its much-postponed opening, its hassles with snooping journalists and its conflict with the city's Consumer Affairs Commissioner. Indeed, the story of 'Nick and Nora' in previews, should it ever be fully known, might in itself make for a riotous, 1930's-style screwball-comedy musical. But the plodding show that has emerged from all this tumult is, a few bright spots notwithstanding, an almost instantly forgettable mediocrity."

Because of its mediocre reception, the musical is often referred to as "Nick & Snore-a".