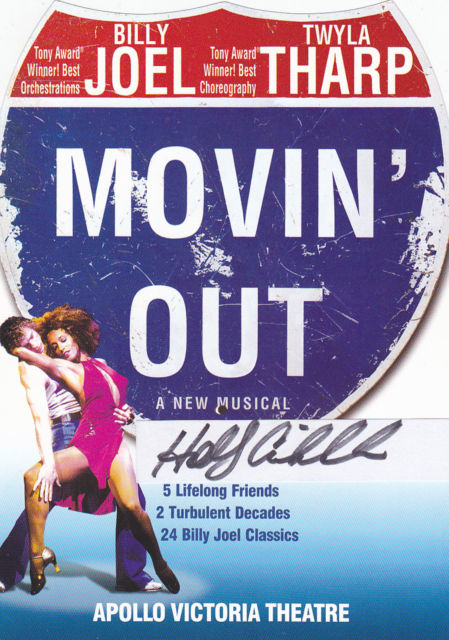 Type de série: Original London
Théâtre: Apollo Victoria Theatre (Londres - Angleterre)
Durée : 1 mois 1 semaine Nombre : 56 représentationsPremière Preview : mardi 28 mars 2006Première : lundi 10 avril 2006Dernière : lundi 22 mai 2006Mise en scène : Twyla Tharp • Chorégraphie : Twyla Tharp • Avec : Ron Todorowski (Eddie), Holly Cruikshank (Brenda), David Gomez (Tony), Laura Costa Chaud (Judy), Matt Dibble (James), James Fox/Darren Reeves (Piano-man) and an ensemble of 20 dancers.Commentaires : Twyla Tharp had choreographed and directed a collection of Billy Joel songs into a “rock ballet”. With the rock band perched at the back onstage, a team of non-singing dancers performed the trademark athletic choreography while a “piano-man” sang out Billy Joel’s songs. The show opened on Broadway in October 2002 and ran for three years and 1,303 performances. However, even though the British critics recognised the brilliance and excitement of the dancing, they were mostly unimpressed with the conception of the show, and felt that five-star dancing was not enough to hold together a three-star story. The limited run was originally booked until mid-July (when it would make way for “Wicked”) but was taken off after just seven weeks.Presse : SARAH FRATER for THE EVENING STANDARD says, " Tissue-thin drama...bombastic characters, although Tharp's dancers and Joel's music are every bit as sensational as you've heard." ZOE ANDERSON for THE INDEPENDENT says, "The dancing is athletic, hard-driven and relentlessly slick...Barked out by Fame Academy finalist James Fox, lyrics and melodic lines are blurred. The songs, thumped out by a 10-piece band, don't give Tharp much rhythmic variety." JUDITH MACRELL for THE GUARDIAN says, "Feels closer to modern ballet than pop tribute...Yet enjoyable as individual moments are, this show remains an unsatisfactory hybrid." CHARLES SPENCER for THE DAILY TELEGRAPH says, "I was amazed to discover that I knew most of the 20-plus songs included here without ever quite realising that I did, as if I had somehow absorbed them by osmosis. When combined with Twyla Tharp's often thrilling choreography, this is a show that really packs a punch." DEBRA CRAINE for THE TIMES says, "It’s the best show dancing in town." LISA MARTLAND for THE STAGE says, "Tharp’s choreography is outstanding."