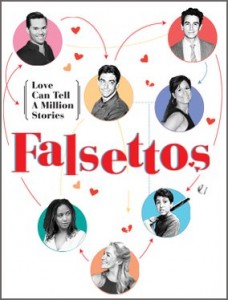 First performed on The Great White Way in 1992, Falsettos made for a thoroughly subversive Broadway show, exploring the all-too-recent AIDS crisis in the form of a wholesome song and dance musical. It was nominated for seven Tonys, taking home two awards for Best Book of a Musical and Best Score, and remains a landmark of gay theater to this day.
Presse : "There’s hardly a moment in the exhilarating, devastating revival of the musical “Falsettos” that doesn’t approach, or even achieve, perfection. This singular show, about an unorthodox family grappling with the complexities of, well, just being a family — unorthodox or otherwise — has been restored to life, some 25 years after it was first produced, with such vitality that it feels as fresh and startling as it did back in 1992." Charles Isherwood for New York Times