Résumé: Meteor Shower takes place on a hot night in Ojai, California, when Corky and her husband Norm are having another couple over for dinner. Laura and Gerald, though, aren't looking for a casual evening of polite small talk with new friends. Eventually, the two couples find themselves in a marital free-fall matched in velocity and peril only by the smoldering space rocks tearing through the sky. 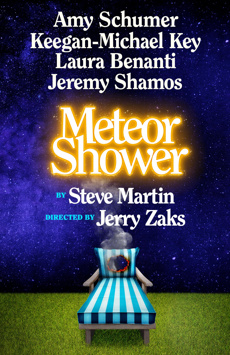 Ms. Schumer is joined on stage by a cast of stage and screen veterans including Tony Award winner Laura Benanti, Emmy Award winner Keegan-Michael Key and Tony Award nominee Jeremy Shamos, for the comedy that promises to have a meteoric impact on the Broadway season!

There aren't many ultra-modern, absurdist comedies floating around the Great White Way at all, so Meteor Shower is really in its own lane in terms of theatrical genres. Steve Martin's script imagines various scenarios that are played out over the course of one evening in California, with outcomes that vary from the trivial to the outlandish. As Gerald (Key) and Laura (Benanti) come over for an evening soirée to gaze at the meteor shower overhead with Norman (Shamos) and Corky (Schumer) at their house in Ojai, it's clear from the get-go that this encounter is going to be nothing short of explosive. May the mind games (and the lashings of physical comedy) ensue...

The four actors of the piece are perfectly cast and each shines as one-by-one they prove their comedy chops. Although Ms. Schumer is undoubtedly the driving force at the box office, these four are equally equipped on the stage and share equal portions of the laughter.

Are these home-wrecking intruders real? Are they just personifications of Norman and Corky's consciences? And how exactly do you create a man with a steaming hole in his chest after a meteor collision on stage? These and so many more questions can be answered with a trip to Meteor Shower at the Booth Theatre on Broadway!Presse : I wish I had more to say, but I’ll admit that I am at a loss for words after seeing Meteor Shower, Steve Martin’s absurd new comedy at the Booth Theatre. What does one say about an entertainment this lightweight, this pointless, this short? - NY Theatre Guide