Résumé: In Latin History for Morons John Leguizamo schools his son—and the rest of us—on the buried and forgotten history of Latinos in the Americas in this outrageously funny, satirical one-man play about uncovering the truth, and recovering from the past. Inspired by the near total absence of Latinos in his son's American history class, Leguizamo embarks on a frenzied search to find a Latin hero for his son's school project. From a mad recap of the Aztec empire to stories of unknown Latin patriots of the Revolutionary War and beyond, Leguizamo breaks down the 3,000 years between the Mayans and Ricky Ricardo into 95 irreverent and uncensored minutes in his trademark style. 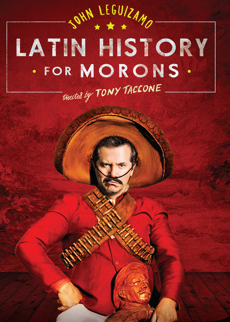 Type de série: Original
Théâtre: Studio 54 (Broadway - Etats-Unis) Durée : 3 mois 1 semaine Nombre : Première Preview : jeudi 19 octobre 2017Première : mercredi 15 novembre 2017Dernière : dimanche 25 février 2018Mise en scène : Tony Taccone • Chorégraphie : Avec : John LeguizamoCommentaires : Tony Award & Golden Globe nominee and Emmy Award winner John Leguizamo has made a name for himself on both the stage and the silver screen. His iconic appearances in films such as "To Wong Foo Thanks for Everything, Julie Newmar", "Carlito's Way", as well as Baz Luhrmann's "Romeo + Juliet​" and "Moulin Rouge!", have solidified him as a household name. Voicing the character of Sid the Sloth in the popular "Ice Age" movie franchise has also won him countless fans of a new generation. However on Broadway and off-Broadway, he is widely acclaimed for his topical and raucous one-man shows.

After the success of Mambo Mouth (1990), Spic-O-Rama (1992), his Tony-nominated performance in Freak (1998), Sexaholix... A Love Story (2001), and Ghetto Klown (2011), Leguizamo graces us yet again with a solo offering, this time inspired by the severe lack of Latino role models in his son's American History classes. Latin History for Morons played an extended limited engagement at The Public Theater in the spring of 2017 and now moves uptown to the iconic Studio 54.

Leguizamo writes in the Playbill of the show beneath his credits that he "never got into the real Studio 54 back in the day, doing the show here is the only way he could get in!" And lucky for us because Latin History for Morons is a most entertaining trip to Studio 54, where we are more than happy to play the role of the 'morons'.

The structure of Leguizamo's show is well-balanced and timed to perfection, shifting between the titular theme of dumbing down 3,000 years of latin history and, to our unexpected delight, regaling touching (and hilarious) stories about parenting. Leguizamo throws in a handful of latin-inspired dance breaks for good measure too, proving he's still got the moves and that (latin) dad dancing rules! He plays out the interactions between himself and his vulnerable son or between himself and his exasperating shrink with great comic timing and sensitivity. You never feel the performance dragging too much on one particular topic and the historical teachings are kept lively with the inclusion of such ingredients as syphilis and intimate relationships with sheep. Yes... sheep…Presse : "Like the best mimics, John Leguizamo administers large but precisely calibrated doses of exaggeration to make his impersonations pop. In Latin History for Morons, a panoptic survey of two millenniums of oppression in the Americas, he tosses off dozens of quick character sketches that feel exactly as true as they are likely inaccurate." Jesse Green for New York Times

"Latin History for Morons is in session — and you shouldn’t let the teacher’s tweed jacket fool you into steeling yourself for a boring, by-the-book seminar. That’s because the teacher is John Leguizamo, and his fourth one-man work on Broadway bears his irreverent, entertaining stamp." Joe Dziemianowicz for New York Daily News

"The history he offers is often junky—his queeny version of Moctezuma II, for example, minces and vogues as he betrays the Aztecs—but rigor is hardly his goal. At the risk of “compliment-sulting” him in the style of his Latin mom: The show’s shortcomings are part of its message and, in a way, its appeal." Adam Feldman for Time Out New York