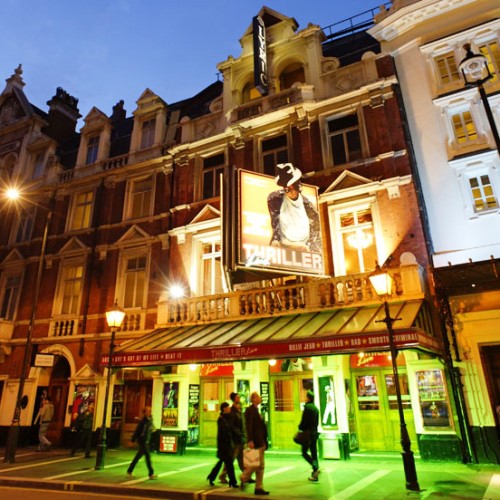 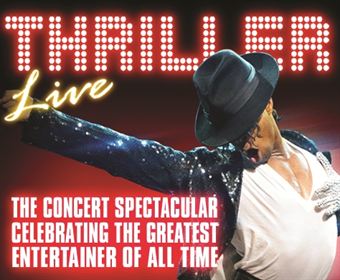 Awkwardly shaped sites in the West End were no hindrance to such entrepreneurs as Henry J. Leslie, who in 1886 took an 80-year lease from the Metropolitan Board of Works to build a theatre at the southern end of the newly opened Shaftesbury Avenue. He then purchased the freehold of the adjoining Café I’Etolle, which occupied the former house and museum of the 18th-century anatomist Dr William Hunter. The brick-faced building fronting on to Great Windmill Street was designed in 1767 by Scotsman Robert Mylne, a fine, prolific architect, to house Hunter’s library, anatomical theatre and dissecting rooms as well as his living accommodation. Of the house, only the rather nondescript street elevation of painted brickwork suiwes, a London County Council blue plaque paying tribute to the great medical man.
Leslie chose C. J. Phipps to design his theatre on what was, at the time, a virtually isolated site. He financed the development with the profits he made from Alfred Cellier and B. C. Stephenson’s comic opera Dorothy, and saw It as a money-making concern. With the eye of an entrepreneur, Leslie stipulated that the building must incorporate rentable offices and chambers, a requirement that múst have generated considerable discussion between architect and client.
Phipps planned his theatre, which opened in 1888, behind a 150-foot-long screen wall to Shaftesbury Avenue. Designed in an Italian-Fiemish Renaissance manner, it is faced in red brick with stone dressings, bearing the name of the theatre carved in large letters above a central pavilion. The stage backs on to Great Windmill Street, with dressing rooms built Into the remains of Hunter’s house. Decorated in an Adamesque manner, the auditorium was originally pale lemon, white and gold, with hangings of gold and coral brocatelle - appropriate colours which have been replaced by a less felicitous overall hue of warm, deepish salmon pink. At upper-circle level is the finest of the theatre's bars, presented as a 17th-century room but Incorporating mid-18th-century detail. Included on the chimney piece are masks depicting the Green Man, a symbol of fertility, accompanied by what appears to be the Devil himself! Modifications to the entrance vestibule, crush room and stalls bar by Michael Osenauer in 1932, in a simple Odeon style, have done little to enhance the building.
An extensive list of successful productions extends from Wilson Barrett’s The Sign of the Cross in 1896, through The Chocolate Soldier, a musical interpretation of Shaw’s Arms and the Man (1910) and J. B. Priestley's Dangerous Corner (1932), to Alan Bennett's Habeas Corpus (1973), a success for the late Sir Alec Guinness and indeed Bennett himself, who appeared as Mrs Swabb.

1886: Theatre designed by Charles J. Phipps for Henry J. Leslie / 1888: Theatre opens as the first of four to be built at the southern end of the newly opened Shaftesbury Avenue / Statutorily Listed Historic Building: Grade II. 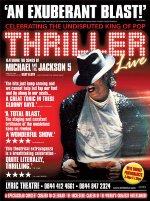 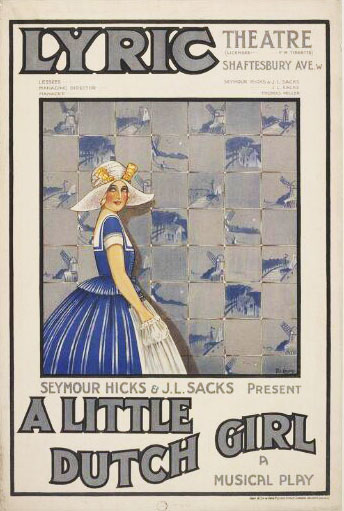 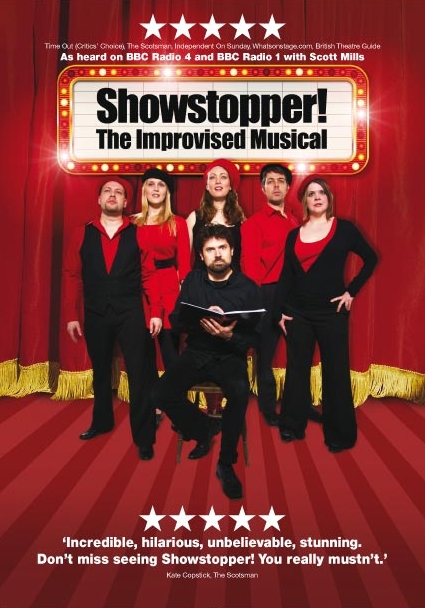 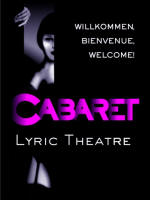 Commentaire: This was, to date, the darkest and most gritty interpretation of “Cabaret”. During “Tomorrow Belongs to Me”, sung by a fresh-voiced Aryan youth, the company cavorted nude like the naturists of the period. In the finale the same
naked dancers piled up on top of each other in the gas chambers. This compelling, fearless and frank production was not to everyone’s taste, but it ran the best part of two years, and won an Olivier Award for Sheila Hancock. It closed on June 21st 2008.  (plus) 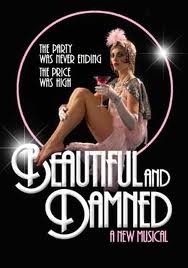 Commentaire: Using the title of F. Scott Fitzgerald’s second novel, this was based on the true life story of Scott and Zelda. It was an expensive production with a lavish water fountain effect at the end of Act One. The critical reaction was extremely damning - “this calamitous enterprise resembles a slow motion car crash” - dull songs and an extremely dull book was the general verdict.  (plus) 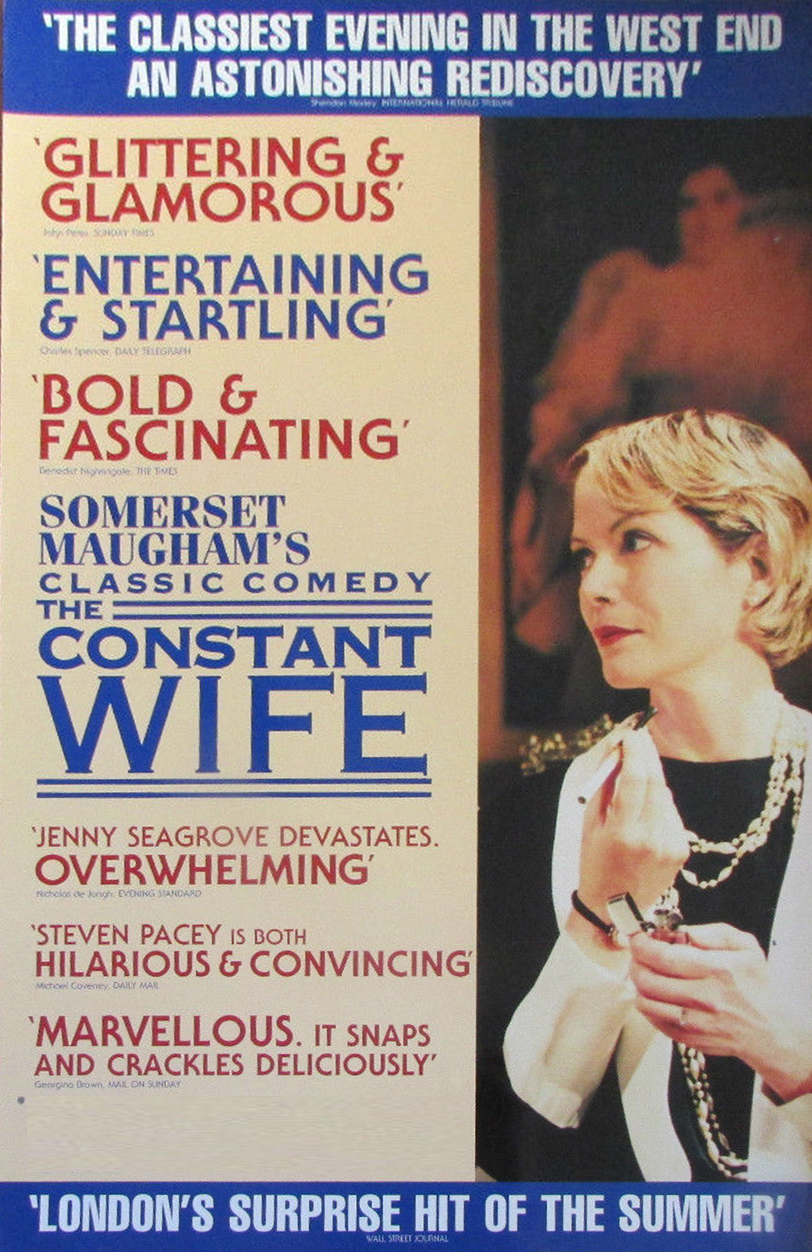 Commentaire: Based on the novel “Marion’s Wall” by Jack Finney, and its film adaptation, “Maxie” with Glenn Close. The production was first staged at the Salisbury Playhouse, but it failed to find backing for a London transfer until the Daily Telegraph covered the story and more than a hundred of its readers became individual “angels”, raising some £150,000. It ran for six weeks and lost over half a million pounds.  (plus) 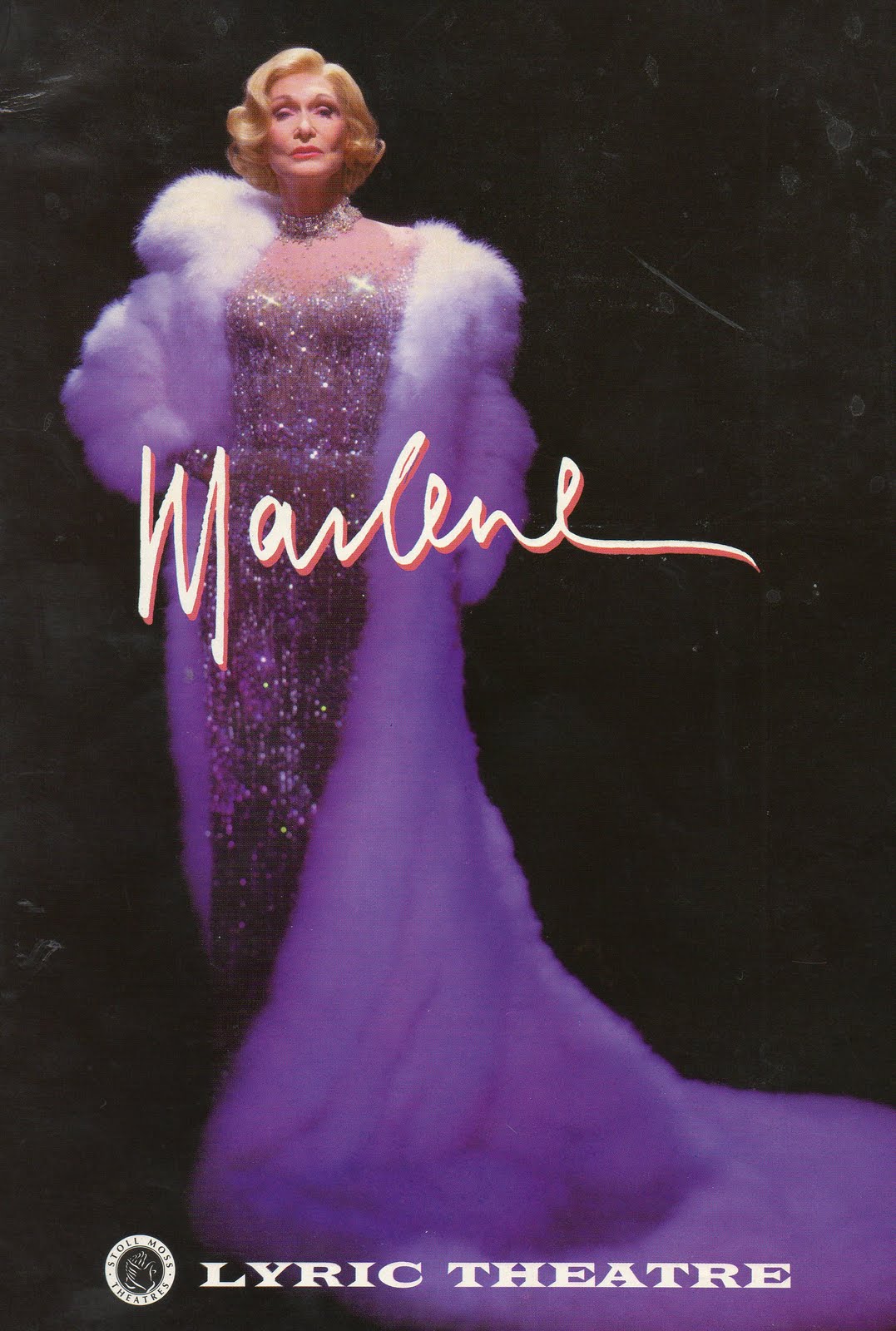 Commentaire: Sian Phillips created a supremely faithful vocal and physical impression of the real Marlene Dietrich, the great survivor. Her performance was universally praised, portraying what Sheridan Morley called “a musical Mother Courage” and providing a constant reminder of what could be done by sheer chemistry of the human spirit alone.  (plus) 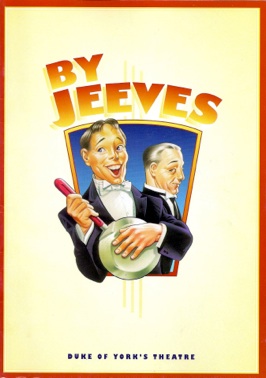 Commentaire: This was a completely revised version of “Jeeves”, the 1975 flop, re-titled “By Jeeves”. Instead of the large-scale original, the new version was a small-scale play with songs. Ayckbourn had thrown out the aunts and the pigs and all the other eccentric stuff and created an entirely new plot: Bertie intends to play his banjo at a charity performance at the local village hall but Jeeves hides the offending instrument. Andrew Lloyd Webber came up with eight new songs with five songs retained from the original. This time it was a success, described as “one of the slickest comebacks since Lazarus”. However, it still only managed just over a six month run.  (plus) 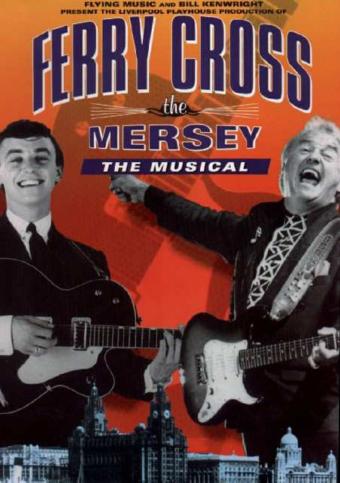 Commentaire: Described as “charitable, gentle and inoffensive, more a concert than a musical”, Gerry Marsden’s genuinely nice and sunny personality charmed most of the critics. It ran 8 weeks.  (plus) 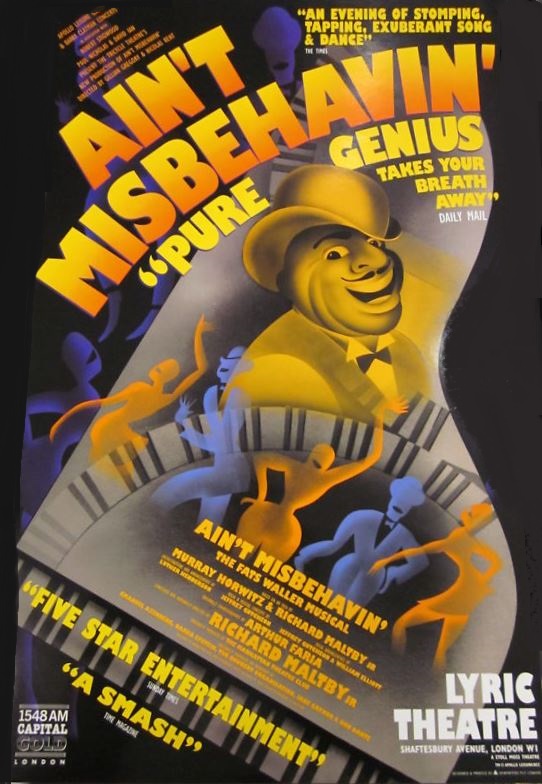 Commentaire: This revival was in its original “chamber” style rather than the large-scale
production staged at Her Majesty’s in 1979. It received a number of rave notices for Sean Palmer, hailed as an exceptional bright new star.  (plus) 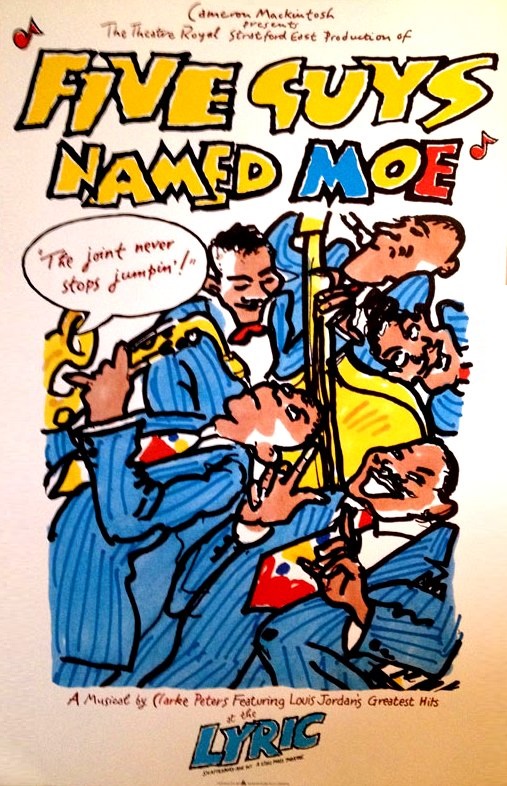 Commentaire: Paulette Randall was credited as director at Stratford, but when the show came to London her name had disappeared and the Charles Augins was credited as Director-Choreographer. The show involved audience participation, with the audience invited to join a conga line through the auditorium during the intervals and out into the street after the show. Under the slogan “The Joint Never Stops Jumpin’” this was a long-running success. In April 1992 it was re-created on Broadway for a year’s run and 445 performances.  (plus) 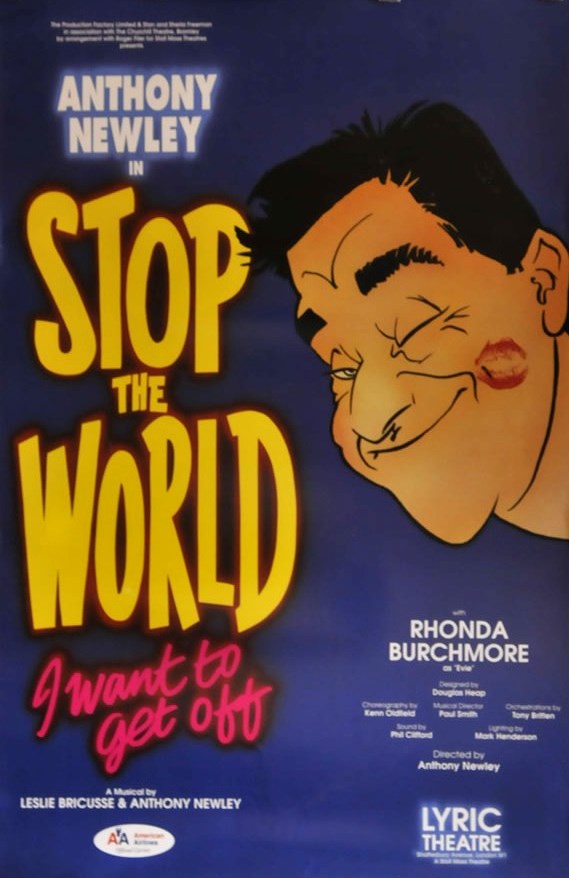 Commentaire: This revival was not a success, running just five weeks, and said to have lost over £500,000.  (plus) 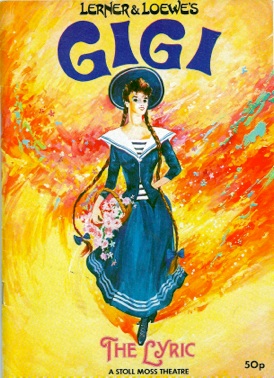 Commentaire: Lerner & Loewe’s 1958 MGM film, “Gigi” was based on the novel by Colette and collected 9 Academy Awards. They were encouraged to create a stage version, though this did not happen until 1973 when the Broadway production with Alfred Drake, Agnes Moorhead and Daniel Massey turned out to be a flop, running just three months. It took another 12 years before the show came to London, this time scaled down, using actors capable of creating a “boulevard” style rather than singers, and re-written in a simpler, less extravagant style. The production ran seven months  (plus) 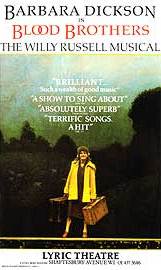 Commentaire: La création du spectacle à Londres pour 7 petits mois. En fait, le bouche à oreille s'était amorcé, mais il était trop tard, le théâtre avait ét loué pour un nouveau spectacle.
Originally produced at the Liverpool Playhouse in January, for an eleven week run, this was based on Dion Boucicault’s 19th Century melodrama “The Corsican Brothers”. This version had an excellent reception for the outstanding performance by Barbara Dickson and the much-praised performances of Andrew C. Wadsworth and George Costigan. However, a few critics thought the characters were too black-and-white : the poor family and the posh family were rather obvious stereotypes, and the social comment was a bit heavy-handed and unsubtle. Notwithstanding, the show had a successful run and was recognised as something rather special, winning the Best New Musical of the Year Award. Five years after its first West End run it was revised and re-produced by Bill Kenwright in 1988 and was an outstanding, triumphant success, becoming one of the longest-running musicals of the 20th Century.  (plus)

6) She loves me (Original London) 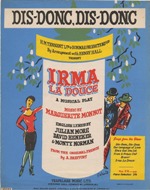 4) Bees on the Boatdeck (Original)

Commentaire: The premiere at London’s Lyric Theatre in November 1899 and was an enormous success, running for 455 performances. The Broadway production a year later was an even bigger success, running 553 performances. The song “Tell Me Pretty Maiden” was a worldwide success, and led to one of the earliest examples of musical theatre merchandise, with all manner of souvenirs of the show being manufactured.  (plus)