«You Were Never Lovelier»

Robert "Bob" Davis is a well-known American dancer with a weakness for betting on the horses. After he loses his money gambling in Buenos Aires, he goes looking for a job with Eduardo Acuña, the wealthy owner of a nightclub. Acuña, however, does not wish to see him. Bob's friend, bandleader Xavier Cugat, invites him to perform at the wedding of Acuña's eldest daughter. Acuña insists his daughters must wed in order of age, from oldest to youngest. Maria, who is next in line, is not interested in getting married, much to the dismay of Cecy and Lita, her two younger siblings, who have boyfriends they want very much to wed.

During the reception, Bob is attracted to Maria, but his advances are rebuffed. While talking with Acuña, Bob remarks that Maria's personality is like "the inside of a refrigerator". Aware of his younger daughters' plight, Acuña begins sending orchids and anonymous love notes to Maria to help get her in the mood. One day, when Bob once again tries to see Acuña at his office, Acuña orders the unseen Bob, mistakenly assuming him to be a bellboy, to deliver the latest note and flower. Maria, who by now is eagerly awaiting the next love letter from her secret admirer, sees Bob dropping off the note and flower and concludes that he is her suitor. When Maria sees Bob at Acuña's office, she asks her father to introduce them. He makes a deal with Bob: in exchange for a contract to perform at the club (at some later, unspecified date), Bob will court Maria and repel her with his "obnoxious" personality.

Despite Bob's efforts to disillusion Maria, the two quickly fall in love. With his plan gone awry, Acuña orders Bob to leave Buenos Aires, and composes a farewell love note on his behalf. Acuña's wife sees him writing the note at their 25th wedding anniversary party and accuses him of cheating on her with another Maria, her dear friend Maria Castro. Bob is forced to reveal the truth in front of Maria and the rest of the family. Impressed by Bob's behavior, Acuña grants him permission to court Maria. After repeated deliveries of flowers fail to accomplish anything, Bob dresses up in armor and rides in on a horse, imitating Lochinvar, a fictional knight Maria had adored when she was young. This does the trick. Maria finally forgives him.

Production
The film was the sec­ond of two films start­ing the duo of As­taire and Hay­worth, fol­low­ing the box-of­fice suc­cess of the pre­vi­ous year’s You'll Never Get Rich. The new film avoided the wartime themes of the pre­vi­ous film, while ben­e­fit­ing from lav­ish pro­duc­tion val­ues – a con­se­quence of the box-of­fice suc­cess of the ear­lier film. Kern cre­ated a stan­dard with "I'm Old Fash­ioned". Ini­tially, Kern was un­happy about the se­lec­tion of Cugat and his or­ches­tra; how­ever, when pro­duc­tion was com­plete, he was so pleased with the band's per­for­mance that he pre­sented Cugat with a sil­ver baton. Al­though Hay­worth had a fine voice, Harry Cohn in­sisted on her singing being dubbed through­out by Nan Wynn. 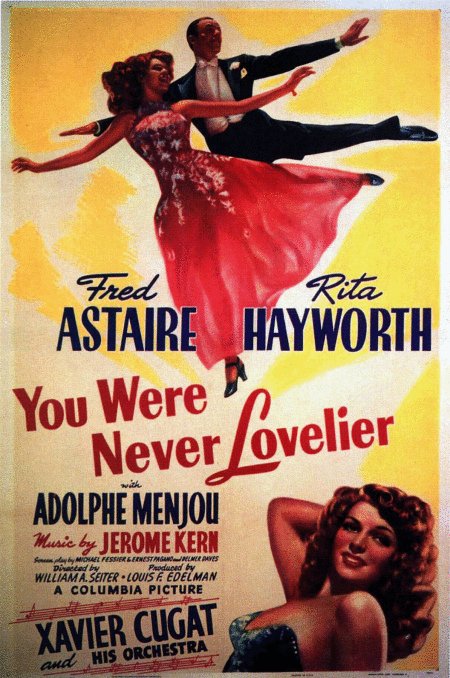