Jeff Wayne's Musical Version of The War of the Worlds was created by composer Jeff Wayne based on the 1898 novel by H. G. Wells. It features Academy Award nominated actor Richard Burton, Justin Hayward (of The Moody Blues), Chris Thompson (of Manfred Mann), Phil Lynott (of Thin Lizzy), Julie Covington (of Evita and Rock Follies), and David Essex (Evita, The China Plates). Wayne conducts what would come to be known as the Black Smoke Band and the ULLAdubULLA string orchestra.
"Forever Autumn" was a UK Top 5 single, sung by Hayward. The album itself spent 290 weeks in the UK album charts. It was in the top 10 in 22 countries and reached #1 in 11 countries. In Canada, it reached just #73. Most of the lyrics on the album were written by former Elton John lyricist Gary Osborne.
The album was one of the first recorded on 48 tracks, using two synchronised 24 track Studer A80s at Advision Studios in London. It was engineered by Geoff Young, who brought the recordings together with only a 16 track desk. (He later worked with George Michael to record "Last Christmas" and "Careless Whisper" using the same studio and equipment).
The repetition of "Ulla!", the cry made by the Martians, and certain musical refrains throughout the musical act as leitmotifs.
The official album comes with several paintings by Peter Goodfellow, Geoff Taylor and Michael Trim that illustrate the story.

Other versions of the album
To promote the 1978 release, an abridged album containing "Radio edits" was distributed to radio stations. Special intros and endings had to be added to certain tracks because they simply were not written with radio in mind. The "air play" album turned out so well that in 1981 CBS decided to release it commercially under the title Highlights from Jeff Wayne's Musical Version of The War of the Worlds.
Two Spanish versions of the album were released in 1978, one featuring Anthony Quinn in the role of the journalist, and the other for Spain featuring Teófilo Martínez in the same role. A version in Dutch was recorded for Radio Veronica in the Netherlands, but never released as an album. A German version was released in 1980 with Curd Jürgens taking the part of the journalist.
A 1989 version of "The Eve of the War" remixed by Ben Liebrand reached number 3 in the UK singles chart. A 1995 edition of the album featured additional remixes of some tracks and additional conceptual art. Australian progressive metal band Alchemist released a version of "Eve of the War" on a 1998 EP.
In 2000, a collection of remixes of tracks from the original album—including several used in the 1998 computer game—were released on a double CD titled The War of the Worlds: ULLAdubULLA—the Remix Album. While most of the contributors are relatively unknown,[5] the album includes two versions of a remix of "Dead London" by Apollo 440 and other remixes by house-music pioneer Todd Terry.
On 23 June 2005 the original album was re-released in two forms: one in a remastered 2-disc Hybrid Multichannel Super Audio CD set; another in a 7-disc "Collector's Edition" featuring additional remixes, outtakes, the actors reading from the unabridged script, excerpts from the Anthony Quinn and Curd Jürgens performances as the reporter, as well as a seventh disc being a DVD showing the making of the album, produced by Phoenix Film & Television Productions.
While the original ULLAdubULLA album had a limited run and went out of print, following the success of the 2005 re-release of the original album, ULLAdubULLA II was released on 17 April 2006. This single CD release was largely made of tracks from the original remix album, with some additional new remixes by Tom Middleton and DJ Keltech, and hip-hop versions of two tracks by DJ Zube. Middleton's remixes of "The Eve of the War" were also released on CD and vinyl.


Aucun dossier informatif complémentaire concernant War of the worlds (The) 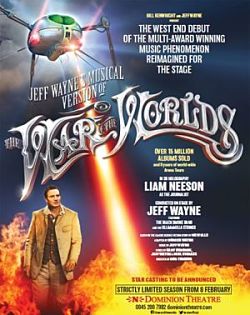