Featuring some of The Kinks’ best-loved songs, including You Really Got Me, Waterloo Sunset and Lola, Sunny Afternoon marks the 50th Anniversary year of the band’s debut release. The Kinks exploded onto the 60s music scene with a raw, energetic new sound that rocked a nation. But how did that happen, where exactly did they come from and what happened next? Set against the back-drop of a Britain caught mid-swing between the conservative 50s and riotous 60s, this production explores the euphoric highs and agonising lows of one of Britain’s most iconic bands and the irresistible music that influenced generations.

On 13 December 2013, it was officially confirmed that a musical based around the early life of Ray Davies and the formation of the band The Kinks[1] would receive its world premiere at the Hampstead Theatre in spring 2014. The musical was named after the band's 1966 hit single "Sunny Afternoon," and features songs from the band's back catalogue. The musical has a book by Joe Penhall and is directed by Edward Hall, with choreography by Adam Cooper, set and costume design by Miriam Buether, lighting design by Rick Fisher, sound design by Matt McKenzie and musical direction by Elliott Ware.

Production history
The show's premiere production began previews at the Hampstead Theatre in London, on 14 April 2014, with its official opening night on 1 May, booking for a limited run until 24 May 2014.

In late June, it was confirmed that the production would transfer to the West End, beginning previews at the Harold Pinter Theatre on 4 October, with an official opening night on 28 October 2014. Tickets for the transfer went on sale on 30 June. Shortly after beginning previews the show extended booking to January, before quickly announcing another extension to 23 May 2015. 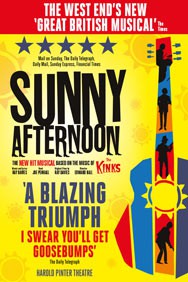 "Alongside some interesting ideological clashes between socialism and trade unionism, Sunny Afternoon is a hymn to English musical individualism and artistic perseverance – all with the miniskirts and freshness of 1960s London. I predict 21st century-sized box office returns." Quentin Letts for The Daily Mail

"For all the energy and skill bubbling away, Edward Hall’s confident production occasionally lacks forward momentum. ‘There’s no handbook for what you’re trying to do’, says Ray’s Dad to the boys, but it remains unclear precisely what this might be, what anger or passion fuels them." Fiona Mountford for the Evening Standard