St. Louis Blues is a 1929 American two-reel short film starring Bessie Smith. The early sound film features Smith in an African-American speakeasy of the prohibition era singing the W. C. Handy standard, "St. Louis Blues". Directed by Dudley Murphy, it is the only known film of Bessie Smith, and the soundtrack is her only recording not controlled by Columbia Records.

Bessie Smith had a hit on the song in 1925 and Handy himself asked Bessie Smith to appear in the movie. Handy co-authored the film and was the musical director. The film was a dramatization of the song, a woman left alone by her roving man. It features a band that included James P. Johnson on piano, Thomas Morris and Joe Smith on cornet, as well as the Hall Johnson Choir with some thrilling harmonies at the end.

The film has an all African-American cast. Bessie Smith co-stars with Jimmy Mordecai as the boyfriend and Isabel Washington as the other woman.

It was filmed in June 1929 in Astoria, Queens. The film is about 16 minutes long. In 2006, this version was selected for preservation in the United States National Film Registry by the Library of Congress as being "culturally, historically, or aesthetically significant".

The film was rumored for a long time to have been banned as demeaning and to have become lost. Neither rumor was true, but when a print was found in Mexico in the mid-1940s, the event was treated as a significant development, even though copies had, in fact, been available elsewhere. "In 1950, a group of white liberals petitioned the NAACP to buy and destroy the print found in Mexico, which they believed to be the only copy extant." 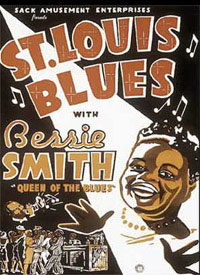