«Spider-Man: Turn Off The Dark»

This Broadway production was notorious for its many troubles. Several actors were injured performing stunts and the opening night was repeatedly pushed back to give the creative team more time to work, causing some critics to review the 'unfinished' production in protest. Following negative reviews, Spider-Man: Turn Off the Dark suspended performances for a month to retool the show. Long-time Spider-Man comics writer Roberto Aguirre-Sacasa was brought in to revise the story and book. Director Julie Taymor, whose vision had driven the concept of the musical, was replaced by creative consultant Philip William McKinley. By the time Spider-Man: Turn Off the Dark officially opened on June 14, 2011,it had set the record for the longest preview period in Broadway history – 182 performances.

Spider-Man, Turn Off the Dark loosely follows the storyline of the comic book series and the 2002 film adaptation of Spider-Man, while adding its own twist on the popular tale. When nerdy teenager Peter Parker is bitten by a genetically altered spider, he discovers he has obtained super strength, web-spinning abilities and other spider-like powers. Parker soon finds himself battling scientist-turned-villain Norman Osborn, who adopts the alter-ego of the Green Goblin. As Parker’s troubles begin to pile up, he looks toward Arachne, a mythical spider goddess, for inspiration.

The musical is based on the Spider-Man comics created by Stan Lee and Steve Ditko, published by Marvel Comics, as well as the 2002 film and the Greek myth of Arachne. It tells Spider-Man's origin story, his romance with Mary Jane and his battles with the Green Goblin. The show includes highly technical stunts, such as aerial combat scenes and actors swinging from "webs".

Although often described as a rock musical, the production "treads new ground" that some commentators have asserted "have effectively distanced it from its peers—and caused some confusion when it comes time to describe the show." The Edge stated that he is unsure of what description to use for the production, because "It is elements of rock and roll, it's elements of circus, it's elements of opera, [and] of musical theater." Bono, admitting that his description is a little "pretentious," has referred to it as "pop-up, pop-art opera," noting that Julie Taymor is calling it a "rock-and-roll circus drama."[9][10] Bono has also described the production as "wrestling with the same stuff" as "Rilke, Blake, Wings of Desire, Roy Lichtenstein, [and] the Ramones." A 60 Minutes CBS special stated that it is being called a "comic book rock opera circus," although in that segment Bono noted that even using "rock" to describe the music is too narrow a description, because "We've moved out of the rock and roll idiom in places into some very new territory for us ... [including] big show tunes and dance songs."

The production was described early on as "the most technically complex show ever on Broadway, with 27 aerial sequences of characters flying" and engaging in aerial combat. The production also includes a "multitude of moving set pieces that put the audience in the middle of the action," and enough projections onto giant screens that Bono has said that it is like a three-dimensional graphic novel.[9] The original story treated the origins of Spider-Man similarly to the story in the 2002 film, but wove in an involved story about a villain based on the mythological Arachne. A "geek chorus" of four teenagers narrated the story. In the rewritten version, the plot hews closer to the comic book and film and trims and transforms the role of Arachne into a "kindred spirit in Spider-Man's dreams".

Broadway production
Spider-Man: Turn Off the Dark had no out-of-town tryouts because of the technical requirements of the production, which were designed for the Foxwoods Theatre on Broadway. The musical began previews at that theatre on November 28, 2010. After many delays, the official opening gala night took place on June 14, 2011.

On November 19, 2013, producers announced that the show would close on January 4, 2014, citing falling ticket sales[26] and no longer being able to get injury insurance for the production as reasons for closure. Having run on Broadway for over three years, the production failed to make back its $75 million cost,[28] the largest in Broadway history, with investors reportedly losing $60 million.

Las Vegas, National Tour and future productions
When announcing the show's closure on Broadway, it was announced the show would transfer to Las Vegas. The show's producer Michael Cohl said of the transfer, "We'll work on improving everything, It could be anything. It's a blank piece of paper.

In 2012, the musical's producers confirmed that they were scouting theatres in Europe, after The New York Post reported that they were considering productions in arenas in London and Hamburg.

On July 25, 2014, Cohl announced that the musical will set out on an arena tour in place of the previous announced production in Las Vegas and would be launched in late 2015 or winter of 2016.
As of November 2018, the tour has not begun.

Box office
Despite poor reviews and bad publicity, Spider-Man was at times successful at the box office. Ticket sales the day after the first preview on November 28, 2010, were more than one million dollars. During the first full week of 2011, Spider-Man had the highest box-office gross on Broadway, with a total of $1,588,514.

The New York Times' Patrick Healy stated in February 2011 that Spider-Man had become "a national object of pop culture fascination—more so, perhaps, than any show in Broadway history" due to media coverage and late-night comedians' monologues on the musical's many delays, injuries, and creative issues. He speculated that the musical would not have staying power through repeat viewings like other hit musicals, after "tourists and parents with children" watched it for "bragging rights at dinner parties or on the playground". The New York Post columnist Michael Riedel opined that month that the musical would be short-lived: "Depending on how much more money its backers are willing to lose, my hunch is that 'Spider-Man' will stagger through the spring, pick up with the tourist traffic in the summer and then collapse in the fall. It should be gone by September [2011]."

Spider-Man survived beyond September 2011, with ticket sales improving during the summer. About half of its audience came from beyond the New York metropolitan area, including many foreign tourists. In November, its producers stated that the show earned about $100,000 to $300,000 in net income each week, which means that Spider-Man would have had to continue playing for at least five years to recoup the $75 million cost. Producers discussed adding new scenes and perhaps a new song each year to persuade fans to attend it again as "a whole new [comic book] issue".

The first week of January 2012, the Broadway League reported that the show had taken in $2,941,790 in ticket sales the week before, the highest single-week gross of any show in the history of Broadway. The record was previously held by Wicked, which took $2.2 million in a week the previous year. Sales declined to $621,960, however, by the last week of September 2013. 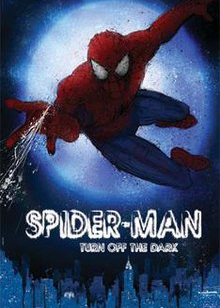 On November 19, 2013, producers announced that the show would close on January 4, 2014, citing falling ticket sales[26] and no longer being able to get injury insurance for the production as reasons for closure. Having run on Broadway for over three years, the production failed to make back its $75 million cost, the largest in Broadway history, with investors reportedly losing $60 million.Presse : The show's first performance, on November 28, 2010, "garnered what was most likely the most press coverage of a first preview in history."