The show was given two workshops in the fall 2015; there was no out-of-town tryout.
The production began previews on Broadway on March 15 and opened officially on April 28, 2016, at the Music Box Theatre, directed by Wolfe, with choreography by Savion Glover. The two worked together two decades earlier, with great success, on "Bring in 'da Noise, Bring in 'da Funk".
Shuffle Along closed on Broadway on July 24, 2016, after 38 previews and 100 regular performances. 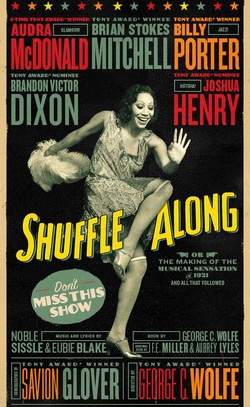 McDonald last trod New York's boards in 2014's Lady Day at Emerson's Bar and Grill, the critically adored Billie Holiday play that bagged the singer her sixth Tony. Her previous wins were for Carousel, Master Class, Ragtime, A Raisin' in the Sun and Porgy and Bess. Also among the all star cast are Tony winners Billy Porter (Kinky Boots) and Brian Stokes Mitchell (Kiss Me, Kate)