«Lady in the dark» 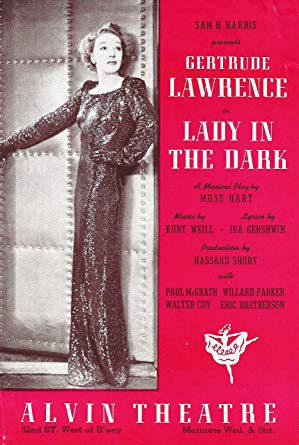 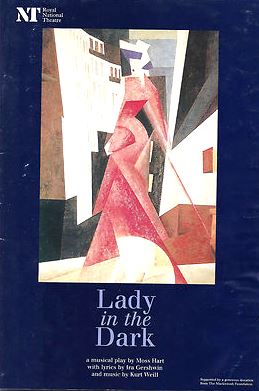 Type de série: Revival
Théâtre: National Theatre (Londres - Angleterre) Salle : Lyttelton TheatreDurée : 4 mois 3 semaines Nombre : 63 représentationsPremière Preview : mardi 11 mars 1997Première : mardi 11 mars 1997Dernière : samedi 02 août 1997Mise en scène : Francesca Zambello • Chorégraphie : Queeny Sachs • Producteur : Avec : Maria Friedman (Liza Elliott), Paul Shelley (Kendall Nesbitt), Adrian Dunbar (Charley Johnson), Steven Edward Moore (Randy Curtis), James Dreyfus (Russell Paxton), Hugh Ross (Dr. Brooks), Ashleigh Sendin (Miss Foster), Summer Rognlie (Alison Dubois), Charlotte CornwallCommentaires : This was the first collaboration of Ira Gershwin following the death of his brother, and ran for 467 performances in New York in 1941. The leading role was played by Gertrude Lawrence, and the show made a star of newcomer Danny Kaye in the role of a camp photographer with a show-stopping patter number “Tchaikowsky”.
The musical is so constructed that all the numbers are sung during the dream sequences that Liza describes to her doctor. The only exception is the song “My Ship” which serves a special part of the plot: it is a half-remembered song from Liza’s childhood and because Charley is the only man who can complete the song for her, he wins Liza’s love.
55 years after its Broadway debut, this was its first London production, though it did have a production at Nottingham in 1981 with Celeste Holm. The critics found it fascinating and important, but felt it suffered by comparison with “Guys & Dolls” which was currently the opposition under the same National Theatre roofPresse : "...Surprisingly, Maria Friedman turns out to be far better at playing Liza, the cool and often collected editress of Allure Magazine – with her talent for cut and thrust - than as the suffering girl on the verge of a nervous breakdown... Miss Friedman in in sweet voice and artfully holds the balance between drama and music, which Lady in the Dark so cleverly celebrates. It is a rousing occasion." Nicholas de Jongh, The London Evening Standard (12 March 1997)
"...[The Lady in the Dark's] saving grace is Weill's score, which allies the emotional plangency of Berlin period to Broadway idioms...The other good reason for seeing the show, as with Sondheim's Passion, is Maria Friedman's stellar performance. She actually persuades you that inside the professionally masterful but emotionally dithering Liza lurks a badly bruised spirit. She sings the big numbers with a direct lyric simplicity and she allows her Guiletta Massina-like clown instinct to emerge in a circus sequence where she cavorts with the pawkiness of a wild-eyed child. The evening belongs unequivocally to her..." Michael Billington, The Guardian (12 March 1997)
"...By all accounts Gertrude Lawrence was magic as the fashion-mag editor...Maria Friedman, who is fronting what the National claims is the musical's belated British premiere, is not quite so charismatic, but once again she proves herself splendidly versatile, resourceful performer... The supporting cast is fine and Friedman more than fine. When she exits from a big-top fantasy episode to launch first into Weill's celebration of vamps, The Saga of Jenny, and then into his splendedly robust love song. My Ship - well, she had the first-night audience wishing the palm of her hand was larger, so we could spend more time in it." Benedict Nightingale, The Times (12 March 1997)
"...The woman having the crack-up is Liza Elliot, the hotshot editor of a leading fashion magazine. In this role, Maria Friedman is badly miscast. She's too sweet, concessive-looking and breathy to project the drive, authority and magnetism that have got this business-suited woman to the top. It's true that in Sondheim's Passion, Friedman conveyed power, but it was the potency of an implacably loving masochism. Here you need a stronger sense of the enamelled armour Liza has built around herself. For if the charcter in Passion was straightforwardly ugly, in Lady in the Dark, the heroine is found to be compensating for the fact that she was thought unattractive to her parents as a child. It's a discovery that allows the show to employ psychoanalysis to endorse traditional roles. Liza's success has nothing to do with trying to compete on equal terms with men, we deduce from the shrink, rather it's the refusal to risk being hurt by competeting with other women. So of the three complete ciphers who want to marry her, she ends up choosing the one who also wants her job..." Paul Taylor, The Independent (13 March 1997)
"...Despite an excellent cast, Lady in the Dark seems like an exercise in theatrical archaeology... The show isn't helped by the fact that Freudian psychoanalysis, for which Lady in the Dark often seems one long advertisement, is increasingly discredited... What scuppers Lady in the Dark, though, is the ;ack of warmth and audience involvement. Maria Friedman is one of our finest musical-theatre talents, but, although she communicated moments of mental distress as Liza, she never comes close to moving you..." Charles Spencer, The Daily Telegraph (13 March 1997)