«It Shoulda Been You»

The musical involves a wedding which brings together the families who are quite, and comically, different.

Wedding bells are ringing and the families involved are none too happy about it. Rebecca Steinberg is about to marry the love of her life Brian Howard and while they see past their differing religions (she's Jewish, he's Catholic), yet Rebecca's overbearing mother Judy, the terrifying yet somehow lovable matriarch of the Steinberg clan and mother of the groom Georgette, a WASP who likes her cocktails, will stop at nothing to see the demise of their children's partnership.

Amidst hatching plans and coups, constant bickering and boiling tensions on the big day, it's up to the bride's cool-headed sister Jenny to keep things on an even keel. But when an old flame shows up unexpectedly, the maid of honour faces a crisis of her own…

It Shoulda Been You premiered at the George Street Playhouse, New Brunswick, New Jersey, on October 4, 2011 and closed on November 4. The musical was directed by David Hyde Pierce and starred Tyne Daly (Judy Steinberg), Lisa Howard (Jenny Steinberg) and Harriet Harris (Georgette Howard). The book and lyrics are by Brian Hargrove with music by Barbara Anselmi, and additional lyrics by Jill Abramovitz, Carla Rose Fisher, Michael Cooper, Ernie Lijoi and Will Randall.

The musical ran at the Village Theatre, Issaquah, Washington and Everett, Washington from March 14, 2012 to May 20. The musical previously had a reading at the Village Theatre's Festival of New Musicals in 2010. The talkinbroadway reviewer wrote that "Lyricist Hargrove and composer Anselmi have created a pleasant score, if not one that offers many tunes you'll be humming as you exit." He called the musical "highly entertaining."

"I Never Wanted This" – Jenny (lyrics by Michael Cooper)
"This Day (Opening)" – Jenny and Company
"Perfect" – Jenny and Rebecca (lyrics by Carla Rose Fisher)
"It Shoulda Been You" – Murray, Marty, Judy, Aunt Sheila and Uncle Morty (lyrics by Will Randall)
"Who" – Marty and Jenny
"Back in the Day" – George and Brian
"Nice" – Judy
"Albert's Turn" – Albert and Company
"Where Did I Go Wrong" – Georgette
"Beautiful" – Jenny (lyrics by Ernie Lijoi)
"A Perfect Ending" – Full Company
"Love You Till the Day" – Greg and Annie (lyrics by Ernie Lijoi)
"Jenny's Blues" – Jenny
"Whatever" – Marty
"A Little Bit Less Than" – Rebecca
"What They Never Tell You" – Judy (lyrics by Jill Abramovitz)
"Perfect/Whatever (Reprise)" – Marty and Jenny
"That's Family" – Judy, Georgette, Murray and George
"Finale" – Full Company

Aucun dossier informatif complémentaire concernant It Shoulda Been You 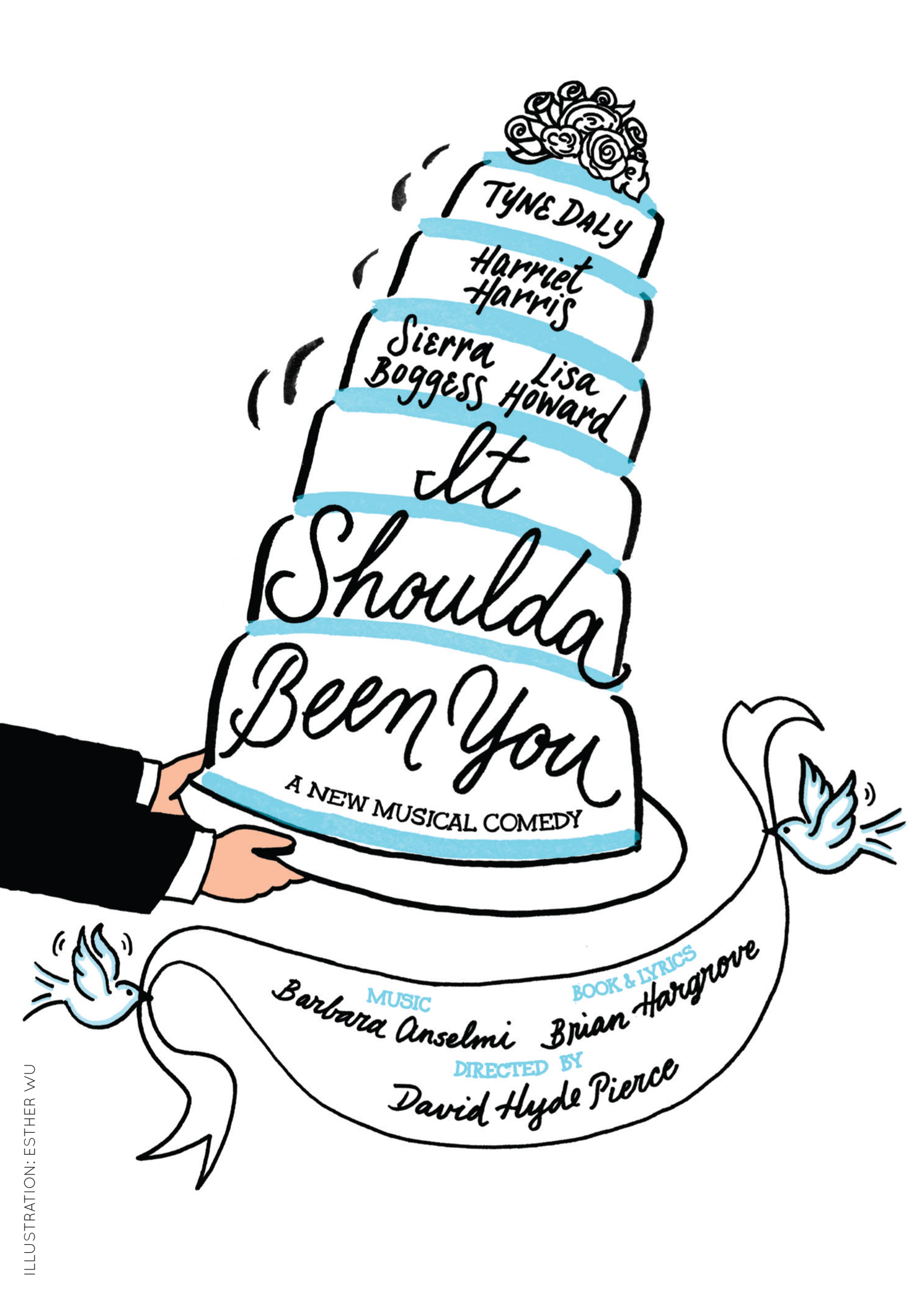 It Shoulda Been You (2015-04-Brooks Atkinson Theatre-Broadway)

"In the end, the show is a harmless diversion. But this is Broadway. 'It Shoulda Been You' shoulda been better." Joe Dziemianowicz for New York Daily News

"These talented, hard-working actors are a joy to watch, and almost make up for the drecky writing. Almost." Elisabeth Vincentelli for New York Post

"It is also very adeptly handled in both the writing and the performances, transforming standard sitcom fare into a rollicking farce with a heart-warming message." Roma Torre for NY1

"Though the cake is stale, they decorate it well. It shoulda been better but it coulda been worse." Adam Feldman for Time Out New York

"Even if you see many of the jokes coming a long way off, the sheer talent on display in "It Shoulda Been You" is worth snagging an invitation to this comically inventive wedding." Jennifer Farrar for The Associated Press

"It’s the sort of show that practically redefines the term 'guilty pleasure." Frank Scheck for The Hollywood Reporter